Electrically Powered Air Taxis – coming to an airport near you?

Fast forward to 2024! It is not a particularly ambitious leap into the future – but possibly just enough for you to catch a glimpse of the stuff science fiction is made of. By 2024 hopefully we will not only have left the COVID-19 pandemic firmly behind us but Paris will be the bustling host of the summer Olympics. What better opportunity than a big international sporting event to launch new exciting technologies and services? Why not hover over the French capital in an electrical Vertical Take Off and Landing aircraft or eVTOL for short?

Before we paint this scenario any further, let us have a look at a couple of concepts and technological developments first. Globally, close to 300 companies are feverishly working on a new generation of electrically powered aircraft. At the same time regulators around the world are devising regulatory concepts that will provide the basis for unmanned aerial systems (UAS) – otherwise known as drones – to populate our skies above our suburbs and even in our city centres.

Images of buzzing swarms of drones delivering freshly baked pizzas or the latest best-selling books across town are certainly premature. However, the European Union Aviation Safety Agency (EASA) has been given the green light to move ahead with regulatory concept for Unmanned (Aircraft System) Traffic Management (UTM). This regulatory blueprint is called U-space in Europe. As defined by SESAR Joint Undertaking (effectively the EU’s air traffic control research project) which developed the original blueprint, U-space is a “set of new services relying on a high level of digitalisation and automation … designed to support safe, efficient and secure access to airspace for large numbers of drones. As such, U-space is an enabling framework designed to facilitate any kind of routine mission, in all classes of airspace and all types of environment – even the most congested – while addressing an appropriate interface with manned aviation and air traffic control.” This means U-space, once established, will allow drones as well as (initially piloted) air taxis to roam the skies and deliver their services, parcels and – yes – also passengers. 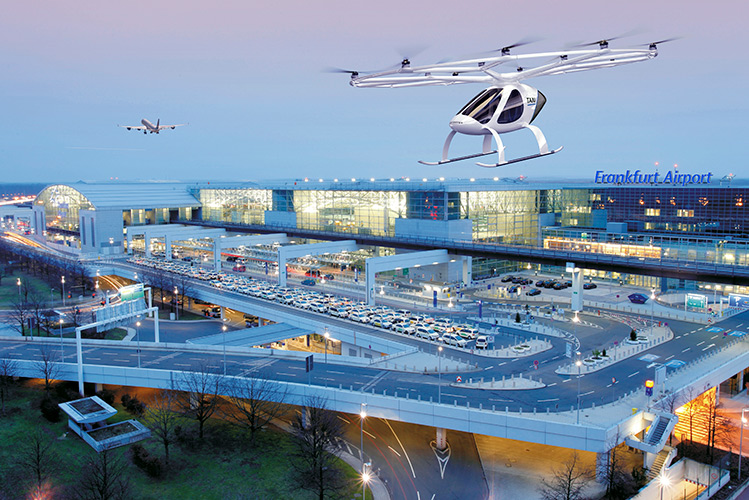 In 2019 Fraport and Volocopter announced their collaboration to jointly develop concepts for processes on the ground, handling of passengers and eVTOL operations to and from a dedicated infrastructure at a commercial airport.

Future gazing or the next step in aviation?

Apart from developing frameworks for drone services in urban spaces, EASA is also preparing the ground for the certification of various passenger carrying eVTOLs and expects to publish a Prototype Technical Specification for a VFR/non-instrument Vertiport later this year. Europe is home to a range of demonstrator projects that seek to speed up and facilitate Urban Air Mobility (UAM). Groupe ADP which owns, operates and invests in airports around the world together with the Paris region’s main public transport provider RATP, are the latest to announce the development of an Urban Air Mobility testing ground at Pontoise airfield 50km to the northwest of central Paris. The two transport giants are partnering with 30 global companies including Germany’s and China’s leading eVTOL manufacturers Volocopter and EHang. The aim is to test, develop and implement air taxi services in time for the 2024 summer Olympics. A fully functional connection between Charles de Gaulle Airport and the capital is more likely by 2030, however.

During demonstrators in Dubai, Singapore, Helskinki and Stuttgart, Volocopter has convincingly demonstrated the capabilities of its Volocopter X2 aircraft which will be superseded by its current VoloCity model. Benefitting from a less stringent regulatory regime, China’s EHang already offers regular sight-seeing trips over Hong Kong to adventurous tourists.

The European Commission started its Urban Air Mobility Initiative (UAMI) in May 2018 as part of the European Innovation Partnership in Smart Cities and Communities (EIP-SCC). This Partnership brings together cities and regions, citizens, industries, SMEs, investors, researchers and other smart city actors. Several clusters consisting of cities and regions have signed up to the initiative with the expectation of finding ways to progressively establish urban air mobility as an integral part of modal transport for goods, services and people.

In brief, air taxi technology, successful demonstrators and progress in regulation around the world paint a promising picture for UAM. But what – if anything – does this mean for the airport industry? 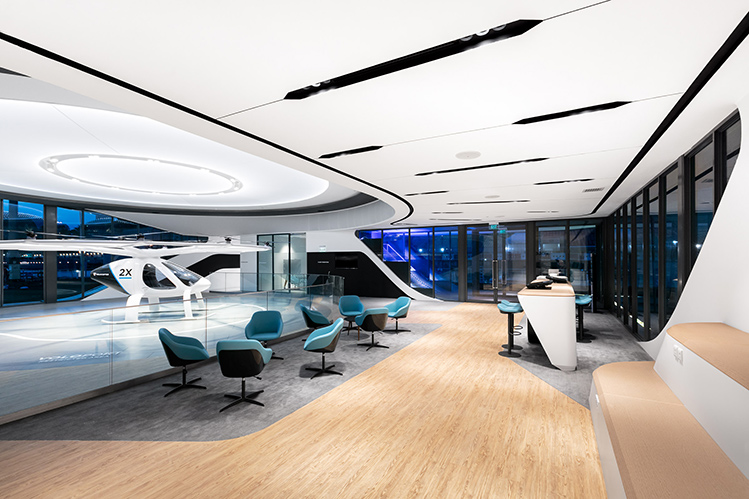 During demonstrators in Dubai, Singapore, Helskinki and Stuttgart, Volocopter has convincingly demonstrated the capabilities of its Volocopter X2 aircraft which will be superseded by its current VoloCity model.

Airports are nodal points for passengers, cargo and express mail. As such they make for potentially high volume origin and destination locations. No wonder that eVTOL manufacturers knock on the doors especially of large hub airport operators to explore opportunities for connecting them with their surrounding cities and beyond. In 2019 Fraport and Volocopter announced their collaboration to jointly develop concepts for processes on the ground, handling of passengers and eVTOL operations to and from a dedicated infrastructure at a commercial airport.

All of this is not trivial. For the business model of air taxi services offering short rides to and from airports to work, time saving compared to travelling by ground taxi or using public transport is a critical success factor. This means landing as close to the passenger terminal as possible in order to save time and avoid additional transfer or walks. From an airport perspective, the routing of electric air taxis must not interfere with commercial air traffic. Losing valuable slots for commercial airlines clearly cannot be a viable option and therefore requires the development of approach and departure concepts that do not interfere with regular airline operations. SESAR is working on a research project on how to integrate air taxis into an airport environment. Germany’s Air Navigation Service Provider DFS is doing much the same, but from more of an implementation angle.

UK-based Skyports and startup Urban Air Port have developed modular concepts for vertiports that could be set up at almost any location. This November Urban Air Port plans to have a temporary pop-up, yet fully functional, vertiport up and running bang in the heart of Coventry. If successful, the live demonstrations could well show the viability of electric flying for the transport of passengers and goods or to provide faster response to emergencies and natural disasters in general.

Considerable development is still necessary to be undertaken and many questions asked and answered before air taxis become a common sight over Europe’s cities or even having them land at an airport near you. Without a doubt, this new and exciting technology offers potential opportunities for airports as a new, fast and traffic-jam busting mode of transport. ACI EUROPE is involved in various EASA expert groups helping to develop safe and efficient infrastructure for electrically powered VTOLs. An EASA commissioned study on societal acceptance of UAM is expected this summer. It will show whether a progressive regulatory framework and futuristic looking landing sites will be enough to coax people into an air taxi. 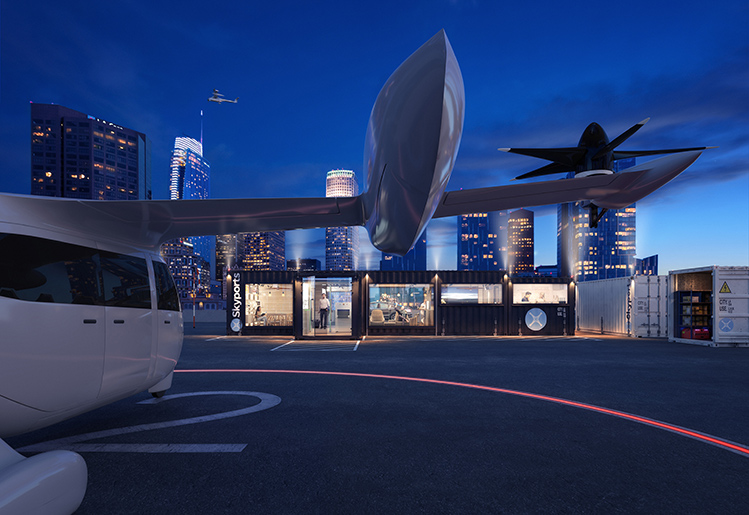 UK-based Skyports and startup Urban Air Port have developed modular concepts for vertiports that could be set up at almost any location.