The ‘one bag’ rule prohibits passengers from carrying duty free purchases on board unless they fit into the traveller’s single cabin bag. This is having a hugely detrimental impact on many of the small and regional airports served by the low-cost carriers (LCCs), which rely on commercial revenues as an increasing proportion of income. LCCs are Europe’s fastest-growing airlines; Branquinho explained that they account for 37% of European traffic, 50% of non-domestic traffic in some cases, and 80% of total traffic at some airports. 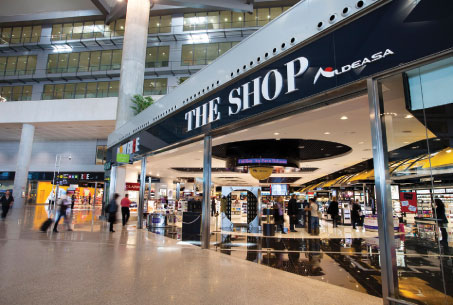 The ‘one bag’ rule prevents passengers from carrying duty free purchases on board unless they fit into the traveller’s single cabin bag. This is having a hugely detrimental impact on the small and regional airports served by LCCs, which rely on commercial revenues as an increasing proportion of income.

“We are seeing losses of up to 40% at airports with a high proportion of LCC traffic. At one UK regional airport, 33% of surveyed Ryanair passengers said they would not buy duty free because of the one bag rule. It is actually difficult to quantify the losses, as some passengers are not visiting the shops at all and some are having their purchases confiscated. It is extremely confusing for travellers, as at some airports they can buy and carry their purchases while at others they cannot,” said Branquinho. “Passengers have always been able to take their airport shopping on board. This is stopping something that is an integral part of the travel experience. At the point where commercial revenues are increasingly important to airports, a lot of retailers are not able to sell their products.”

Non-aeronautical revenues are becoming increasingly important, particularly for small and regional airports, and are vital to providing the low airport charges enjoyed by LCCs across Europe. Olivier Jankovec, Director General ACI EUROPE, said: “There is no question that airlines are free to set their own rules when it comes to cabin bag allowances. However, such rules should not interfere with the ability of airports to sell duty free and travel retail items to passengers before they board their plane. This is an unfortunately short-sighted stance on the part of some LCCs. Demanding even lower airport charges while introducing rules that actively harm an airport’s ability to generate alternative revenues is simply not a tenable position. If LCCs are to continue to benefit from using airport infrastructure at well below cost price, they need to appreciate the role that non-aeronautical revenues, and in particular airport retail, play in making that possible.” 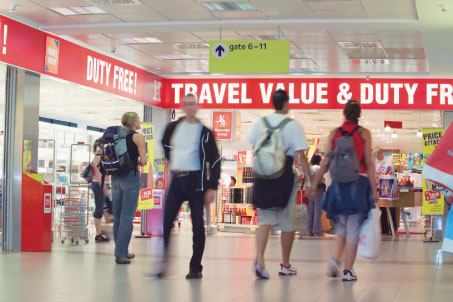 Branquinho: “Generally, airports affected by this have seen up to a 40% drop in retail revenues. In the end, airports are losing revenues too, as well as retailers. This matters because at some airports LCCs handle 80% of traffic and, effectively, hand baggage is all these passengers have.”

A key cause of confusion for passengers is the varying degrees of implementation of the one bag rule. “You can fly out on an LCC to a destination and only be allowed one bag, then fly back on the same carrier with no restriction,” said Branquinho.

Surcharges are generally levied by the ground handling agent at the gate to check-in or carry-on an additional bag. While Ryanair frequently restricts passengers from carrying their airport shopping in addition to their piece of hand baggage, instances have also been reported with Wizzair, easyJet, bmibaby, Norwegian, Cimber Sterling, Vueling, Jet2.com, Windjet and germanwings. No network carriers currently apply similar restrictions; however, Branquinho raises the prospect. “If you look at other airlines that are starting to unbundle their products and charge passengers to check-in bags, for example, how long will it be before full-service carriers plan to implement the one bag rule?” she said. 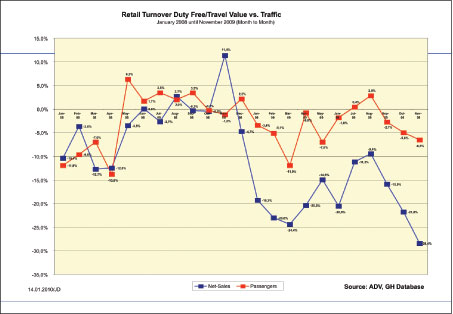 There have been strong complaints from passengers as a result of bags being refused at the gate. “There have been, and still are, angry reactions from passengers. It is not just a duty free/travel retail goods problem – passengers can’t take their sandwich or coffee onboard, or even a newspaper or magazine, if they can’t fit them in their bag,” explained Branquinho. The problem is being addressed on a piecemeal basis, with some airports refusing to apply the rule, but the ultimate resolution would be for all airports to take a collective position and refuse to let their carriers apply the rule. A key issue is the impact on consumer behaviour – once the one bag rule is in the passengers’ minds, they may stop shopping. “Some airports affected by this have seen up to a 40% drop in retail revenues. In the end, airports are losing revenues too, as well as retailers,” said Branquinho. “This matters because at some airports LCCs handle 80% of traffic and, effectively, hand baggage is all many of these passengers have. For example, 70% of Ryanair passengers only have hand baggage. With commercial revenues so important to airports, this is crucial.” 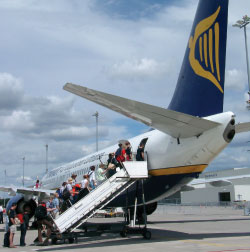 There has been an angry reaction from many passengers – carrying airport purchases onboard in addition to hand baggage has been an accepted part of travel for more than 50 years.

ACI EUROPE has issued a Recommended Practice dedicated to this issue, advising that airports should ensure that their Airport User’s Regulations prohibit the performance of commercial activities by users at places other than those areas specifically designated for that purpose by airports. Airports should further ensure that such prohibition is fully respected.

The Recommended Practice advises that airports should ensure that their Airport User’s Regulations require users not to impose any rule or implement any practice in relation to their passengers, which may directly or indirectly affect the airport’s non-aeronautical activities or operational procedures.

Preventative action and a coordinated response from European airports are both necessary. The business model of regional airports is under pressure, with low aeronautical charges and the prospect of low non-aeronautical income as a result of the one bag rule. Some airports have successfully resisted and refused to meet the demands of some LCCs on this matter, with the airlines ultimately accepting their position.