On 6 April 2021, Istanbul Airport marked two years since the “Great Move” – the successful transfer of operations from Atatürk Airport to the new mega-hub in just 33 hours. Since opening, Istanbul Airport has welcomed more than 10 new airlines and, pre-COVID, was connected to over 300 destinations, with a throughput of 69 million in 2019.

“Our first priority is as fast a recovery as possible,” begins Kadri Samsunlu, Chief Executive Officer and General Manager, iGA Airport Operation. “I call 2021 a year of ‘normalisation’ – I will be very happy if we reach 50-60% of 2019 levels this year. I’m expecting a much stronger recovery in 2022, because the vaccine rollout will be much wider globally. We need a couple of years to return to 2019 levels, and I believe we will reach our 100 million target five to seven years from today.” 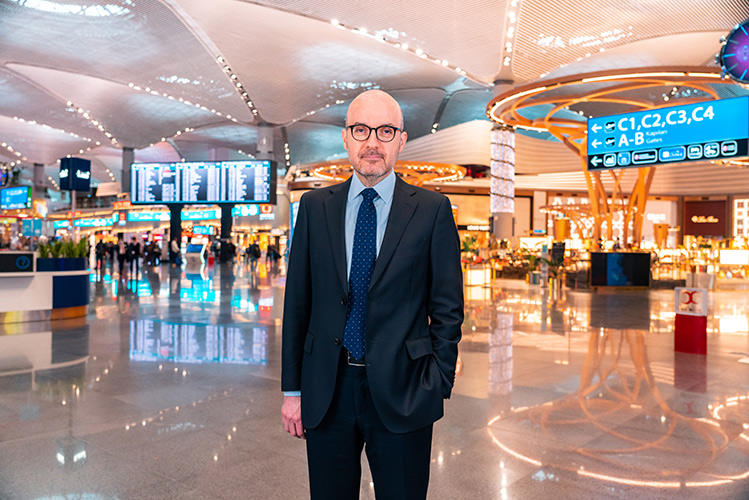 Kadri Samsunlu, Chief Executive Officer and General Manager, iGA Airport Operation: “Our first target is to reach 2019 levels again as quickly as possible. Afterwards, our target will be to reach 100 million passengers in 5-7 years. We’ll do this by setting an example of airport operational excellence and by enhancing Istanbul’s position at the very top of the global airports league.”

Speaking to Airport Business from Ankara on a typically busy day of meetings, Samsunlu is energetic as he reflects on reaching the second anniversary of full operations. “We are most proud of having built the biggest airport in the world in a record time of just 42 months, and of the unprecedented airport transfer process – no hub of this size has ever been transferred to a new site – we had many critics predicting failure and disruption which simply never happened.”

With that episode now behind iGA, Samsunlu has set his sights on the future, especially the importance of creating a “strong corporate culture”, including the core goal of doubling spend per passenger in the retail and food & beverage areas since opening. Added to this, the airport has also already won ACI EUROPE’s Digital Transformation Award in November 2020, and became the first airport in the world to receive ACI Airport Health Accreditation. This list is by no means exhaustive, but serves to illustrate the steps Istanbul Airport is taking to succeed in a post-pandemic world.

The COVID-19 pandemic arrived just as Istanbul Airport was preparing to mark one full year of operation and, like all airports, it experienced a significant impact on traffic and financial targets. Passenger numbers are better than others – currently around 35% of 2019 levels, and the airport is preserving cash by slashing both operating and capital expenditure.

“On the big project finance side, we are able to service our interest obligations,” says Samsunlu. “During the pandemic period, we are not making any principal debt repayment, but we are continuing to pay down our interest with the banks. We have received significant support from our lenders until the recovery comes. The difficult part from a financial perspective is over and, in the short-term, we will see better results on our top line.”

Importantly, Turkey’s furlough scheme, introduced in April 2020, has been a lifeline for employees, supporting jobs and meaning Istanbul Airport has astonishingly not had to make any redundancies during the pandemic. 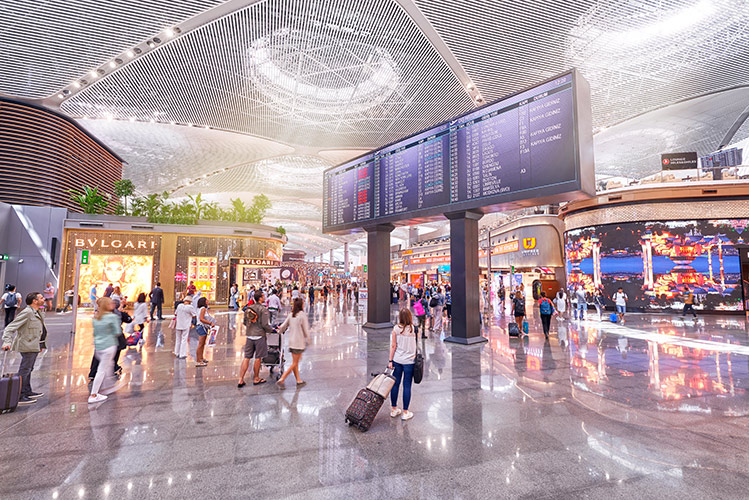 On 6 April 2021, Istanbul Airport marked two years since the “Great Move” – the successful transfer of operations from Atatürk Airport to the new mega-hub in just 33 hours. Since opening, Istanbul Airport has welcomed more than 10 new airlines and, pre-COVID, was connected to over 300 destinations, with a throughput of 69 million in 2019.

“Airports and airlines everywhere must be aligned in managing recovery”

Samsunlu believes that Turkish resorts will be at the forefront of a travel and tourism revival this summer. “The first indications we have received are very positive. There is definitely a demand to come to Turkey for summer. In 2019, our country welcomed 45 million foreign visitors; last year this number dropped 70% to almost 13 million – we’ve never seen such a contraction before.”

Istanbul Airport is working closely with the ‘Go Turkey’ tourist board and Turkish Airlines to support the recovery. “It’s vital to coordinate the reopening of the travel and tourism industry,” says Samsunlu. “If we want to have a quick recovery, we need to work in very close harmony with our hub carrier and we are shoulder-to-shoulder with Turkish Airlines to align our measures on COVID-19. Airports and airlines everywhere must be aligned in managing the recovery of the sector.”

Meanwhile, Turkey’s Ministry of Culture and Tourism has launched a ‘Safe Tourism Certification’, which validates the health and hygiene measures implemented by travel and tourism businesses. “Turkey has done a tremendous job in implementing health and safety measures to protect tourists against COVID-19,” says Samsunlu. “Our country is also offering ‘Tourist Protection Support Insurance’ and an ‘Extra Accommodation Costs Guarantee’ in a single package for foreign visitors. So, all of these measures rigorously demonstrate that Turkey is a safe destination for tourists.”

In its own response to COVID-19, Istanbul Airport prioritised a “healthy and safe” travel experience, and last August was the very first in the world to receive ACI’s new Airport Health Accreditation. 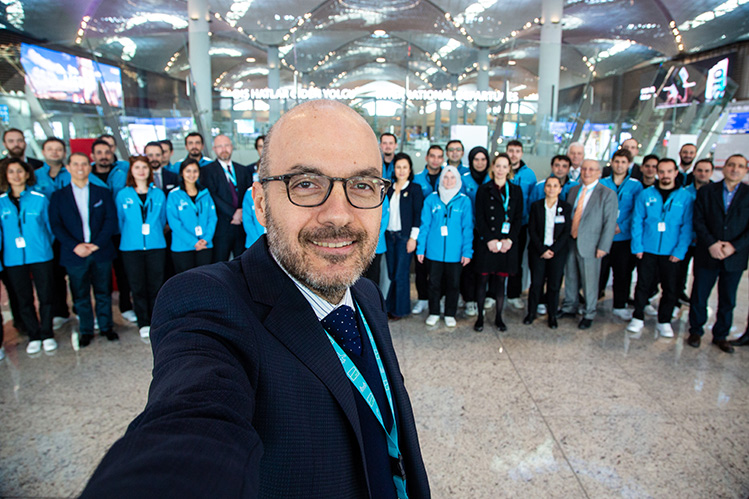 Post-COVID, Samsunlu expects Istanbul Airport’s route and hub development potential to quickly resume great importance. He identifies some key ‘white spots’ on the route map. Istanbul Airport does not have any direct flights to Australia, while unserved destinations in Asia and Africa are also being targeted. “78% of Asia-Africa traffic involves at least one stop between the two regions. Despite over 50 direct African routes from our hub, and our perfect geographical location, our market share of total transfer traffic between Asia and Africa is still less than 5%. So, this is a big focus area for us.”

Meanwhile, Asia-Europe is a large volume market of over 100 million annual passengers, with half of traffic at least one-stop. “Our market share for transfer of this large volume is around 11%. Therefore, we are looking to increase the flow between the two continents and working on new routes with our home carrier and foreign carriers.”

Unsurprisingly, Samsunlu says a key goal is “to increase the number of Chinese airlines and passengers coming to Istanbul Airport…in normal times 15 million Chinese travellers come to Europe each year. Istanbul has only 400,000 of this market, corresponding to 3% of total Chinese tourism flow to the continent – that’s very low – but also a great potential.”

In terms of unserved potential, Samsunlu describes Australia as the big opportunity. “It is a high priority for us to connect Istanbul Airport with Australia and provide access for Australian travellers to 40+ Turkish destinations and 120+ European destinations via Istanbul. This is the only continent that Turkish Airlines doesn’t fly to.”

With a host of destinations in Asia and Australasia still not served by Turkish Airlines, Istanbul Airport is also exploring interline opportunities to provide a seamless experience for travellers connecting between two different airlines.

“There is a significant opportunity for airlines to get new business in Istanbul and benefit from Turkish Airlines’ strong transfer feed,” says Samsunlu. “So, our priority is also attracting more new Asian airlines to Istanbul. This is an important opportunity, which our marketing team is working very hard on with the big travel groups, as well as the airlines themselves.”

Samsunlu emphasises that the whole principle of the brand-new Istanbul hub was to create “abundant airside and slot capacity”. In June 2020, the third independent runway was inaugurated, effectively doubling the airside capacity offered by the old airport. “This event makes Istanbul Airport the first in Turkey, and only the second in Europe, to operate three independent parallel runways,” Samsunlu explains. “The airport is able to accommodate around 2,800 movements each day.”

Importantly, it is the first of Istanbul’s runways to open on the eastern side of the airport, significantly increasing efficiency in terms of taxi times.

The airport has also allocated significant land for the cargo business. “We see new companies establishing operations at Istanbul Airport, like DHL and Turkish Post. The target is to be not only a hub for passengers, but also for cargo,” Samsunlu adds.

“An enhanced passenger experience that is digitally-aware”

In line with its ‘Smart Airport’ concept, Istanbul Airport is committed to designing an end-to-end fully digital passenger experience that will take the digital customer journey to the next level. Meanwhile, on the commercial side, Istanbul Airport is establishing its own digital marketplace – istbuy.com – which will utilise Augmented Reality and Artificial Intelligence.

Samsunlu explains that, post-pandemic, digital transformation will be even further accelerated. “In particular, Istanbul Airport’s passenger processing systems will be reinforced with biometric solutions based on the very latest facial recognition technology.”

Smart cameras will retrieve passengers’ biometric data from check-in desks and self-service kiosks, processing the data for use at various control points, such as security, border control, lounges, retail stores and boarding gates.

Once unique identification information is formed, comprising a combination of biometric data, flight details and passport or identity card, passengers will not be required to present any documents while travelling through the airport.

The successful focus on digital innovation was recognised at the 16th ACI EUROPE Awards held in November 2020, at which Istanbul Airport won the Digital Transformation Award. This award, which is an initiative of ACI EUROPE in association with the SESAR Joint Undertaking, recognises airports that have embraced digitalisation, as well as innovative technologies and procedures, to enhance their operations.

“Digital transformation is critical in many aspects, from operational performance to strategic advantages,” says Samsunlu. “Through taking advantage of different fields of technology, combined with the vision of SESAR (Single European Sky ATM Research), at Istanbul Airport we are able to offer our passengers a unique digital journey experience, a better operational capability, while also reducing airport costs.” 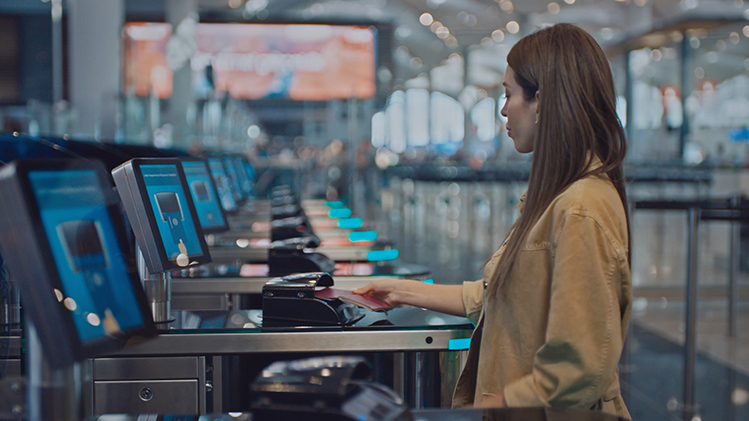 A vast amount of know-how and capability has been created in the construction and first years of operation of Istanbul Airport and iGA naturally has international ambitions as a manager and developer of other airports.

“Obviously our shareholders have long been involved in the construction and operation of many airports around the world. Now, with this expertise consolidated in building and operating one of the world’s leading hubs, of course we are interested in sharing our know-how with other airport operators. From this perspective, we may soon be competing with Changi, Munich, and Schiphol.”

Meanwhile, in terms of traffic, Samsunlu explains that Istanbul Airport’s big competition is not in Europe, but rather with the Gulf airports of Dubai, Doha and Abu Dhabi. “I believe that Turkey is a more advantageous location, especially for European destinations, because we are two to three hours closer to Europe and this radically alters the choice of aircraft, and destinations that can be viably served.”

While the current focus is, naturally, on the extraordinary challenge of the COVID-19 pandemic, looking ahead Samsunlu adds that Istanbul Airport is working hard to achieve the goals set before COVID-19. “Our first target is to reach 2019 levels again as quickly as possible. Afterwards, our target will be to reach 100 million passengers in 5-7 years. We’ll do this by setting an example of airport operational excellence and by enhancing Istanbul’s position at the very top of the global airports league.”