Solar power: the next safe solution for runway lighting? 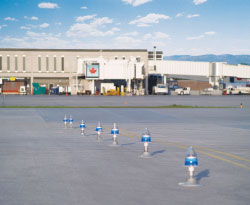 While airports are making a concerted effort to explore new ways of cutting energy emissions on the ground – such as the global push towards low energy LED lights for runway operations – solar power and solar LED technology is being considered by some industry experts as having growing potential for taxiway, helipad and obstruction lighting and as a standby power or lighting option during airfield emergencies.

In a recent incident, failed runway lights caused a blackout at Glasgow International Airport, resulting in aborted landings and takeoffs. It is these scenarios that solar lighting could, in the future, offer a reliable and energy-efficient back-up system, explained Thomas Petzing, a senior first officer for Virgin Atlantic and advisor for Aviation Renewables – an industry leader in consulting for solar LED lighting and power applications at commercial airports. “They would be particularly helpful for commercial airports in developing countries where they can lack the power or lighting infrastructure.

From a pilot’s perspective when you are looking at airfields and planning before a flight, you have to anticipate everything that could go wrong, including what the infrastructure is like at an airport. This is a bigger issue at certain airports in developing countries and I would like to see them take the lead with solar power. If an airport’s infrastructure is not good then we need to take more fuel to prepare for a missed approach in the event we are faced with a blackout.”

Wilmott: “Technology advances within solar LED airfield lighting have increased the amount of time solar powered lights can continue to run without sunlight and at a medium intensity.”

Petzing also highlighted other uncertainties pilots can face. “When you are flying over parts of Africa or Siberia, for example, if there was a technical problem and you had to divert the plane, a pilot would like to know what lighting systems they’ll be faced with. These are issues you have to think about.” Petzing is currently in discussions with the South African authorities to help steer the airports towards solar lighting solutions. “There is a huge amount of international kudos to be had using it,” he said.

Solar lighting solutions – like any airfield technology – must comply with ICAO, CAP 168 and FAA light output requirements. ICAO (International Civil Aviation Organisation) has set up a Visual Aids Working Group and is discussing the wider potential of solar power through continued coordination with air transport stakeholders and users.

Aviation Renewables was the first company to introduce solar LED lighting at commercial airports in 2002. It consults and collaborates with all international industry stakeholders, including ICAO, FAA, US DOD, NATO and civil aviation authorities, while also representing manufacturers who produce green solutions for the aviation industry. Allister Wilmott, the founder and director explained the benefits of solar power and solar LED lighting. “These include no energy costs, virtually no infrastructure requirements and little or no maintenance. Solar powered lighting is a niche technology within the industry but is starting to become recognised as proven, reliable and mainstream. The technology was first installed in the Middle East and at US military bases before commercial airports started to recognise its potential.” 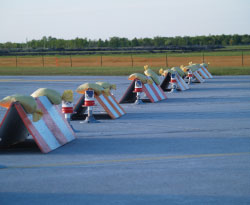 Solar powered lights are particularly effective at general aviation airports where most have minimal guidance, if any at all for pilots trying to guide their way from runways to parking areas. Solar power usage is also proving to have viable applications at commercial airports. Wilmott explained: “The big commercial airports started testing the technology for use in temporary applications such as marking obstructions and lighting taxiways. The biggest development was the introduction of radio control from the tower or aircraft, allowing commercial airports to implement solar lighting technology for use on their runways during emergency or temporary lighting operations. I think this is an effective safety and operating benefit for solar technology at commercial airports, along with additional uses such as permanent taxiway lighting, obstruction lighting, windsock lighting and visual glide slope lighting.” Some notable examples of solar powered lighting being used as an emergency back-up system involve commercial airports located in sunny climes. They include: Grantley Adams international Airport in Barbados, VC Bird International in Antigua and Alice Springs International Airport in Australia. Grand Bahamas International Airport has also just installed solar powered taxiway edge lights from Avlite Systems in partnership with Aviation Renewables.

“The technology is still in its infancy but it is providing an enhancement to our operations and it works for us,” said Chris Davis, the airport’s head of operations. 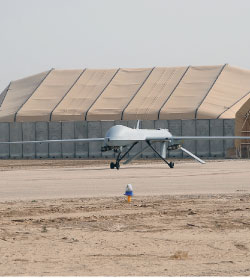 There are inevitably some drawbacks with solar power, which can only operate at higher intensities for a limited period of time if not connected into power cables. Wilmott said: “The main goal for any technology within the aviation industry is to meet the safety requirements. Technology advances within solar LED airfield lighting have resulted in increased hours of autonomy, or the amount of time solar powered lights can continue to run without sunlight and at a medium intensity.”

He also pointed to significant improvements in LED intensities and efficiencies and creative advancements in RF communications, controls and encryption, suggesting that a hybrid solar airfield lighting system with cables providing a back-up power supply could be a future possibility for commercial airports that must be able to meet all safety requirements 24 hours a day.

“One of the key economic and technical applications we are researching right now is how realistic it is in terms of cost, safety and operation. It will be interesting to see if the hybrid system catches on in the industry. The question is, can the technology, industry and authorities make the hybrid jump?,” said Wilmott.