Loganair has no intention of being another flybe

An interview with Jonathan Hinkles, CEO Loganair. By James Pearson

Loganair became an independent airline in 2017 after its longstanding franchise agreement with flybe ended. Since its rebirth, ‘Scotland’s Airline’ has grown strongly. It ended 2019 with 1.6 million seats across 68 non-stop routes and six countries. This includes its intra-Orkney ‘lifeline’ services using nine-seat Islanders, including on Papa Westray to Westray – the world’s shortest scheduled route.

Loganair is now the UK’s third-largest domestic airline after easyJet and British Airways. But, with a network of 39 UK airports, it is by far the number one by this measure. 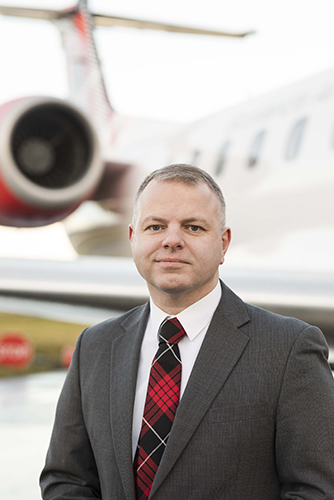 Jonathan Hinkles, CEO Loganair: “We have a big plan for summer 2021 that is reasonable and rational. We’re planning to have 41 aircraft by then, two fewer than expected at the beginning of coronavirus.”

“We took over around 14 flybe routes,” begins Jonathan Hinkles, CEO Loganair. “They’re important – if we didn’t have these routes we would be heading in a different direction during this pandemic.”

Hinkles categorises flybe’s route network into three. “Firstly, routes picked up by others; secondly, routes possibly viable that no-one is serving; and thirdly, routes that no-one should have been operating in the first place.”

Multiple routes remain in the second category, both domestically and internationally. “Perhaps 10-15 routes still remain in this category, especially involving Dublin, Paris-CDG, and Amsterdam. We think a good number of these did well.”

11 of flybe’s 15 most profitable international routes remain unserved, including the above cities. “Domestically, Manchester-Edinburgh, Edinburgh-Cardiff, and Birmingham to Newquay – all in category two – remain unserved,” Hinkles adds.

The largest of these, Edinburgh-Manchester, won’t be straightforward. “This route needs real hub service,” says Hinkles, with connectivity over the English airport. Loganair shelved its plans to begin an up-to four-daily service.

Loganair began Glasgow to Belfast City in early-September, connecting the regional carrier’s top airport to Northern Ireland. The route had 142,000 passengers with flybe in 2019 and a seat factor of 77%.

Going forward, Hinkles sees Loganair concentrating on the UK, Scandinavia, and Ireland markets. “We’re finding Scandinavian markets – Norway and Denmark – have actually worked well for us,” he says. “The yield environment is stronger and the sectors are shorter. You tend to find that the average fares to Norway are very similar to those of an average point in Germany, but we’re doing half an hour’s less flying each way to get there. It does really make a difference to the economics.”

“Airports are largely being rational”

Asked what Loganair wants from airports, Hinkles is unequivocal: “There needs to be more of a partnership with airports. We won’t sign-up to long-term deals. There’s absolutely no way we can do that with the current market uncertainty.”

Given COVID-19, “everything is now a significant risk”. As such, understanding and proactivity from airports is required. “Airports are generally being open. They’re largely being rational and reasonable,” says Hinkles. Some have cut minimum passenger thresholds, for example, while Hinkles praises Newquay Airport for acting very quickly in agreeing to terms for its new Manchester service that begins on 28 March 2021.

Loganair is talking to many airports about new route opportunities. “There will be a number of potential thinner routes that full-service carriers end,” Hinkles comments. “A good place to be in a recession is to have smaller planes… get the bottom that others cut.” 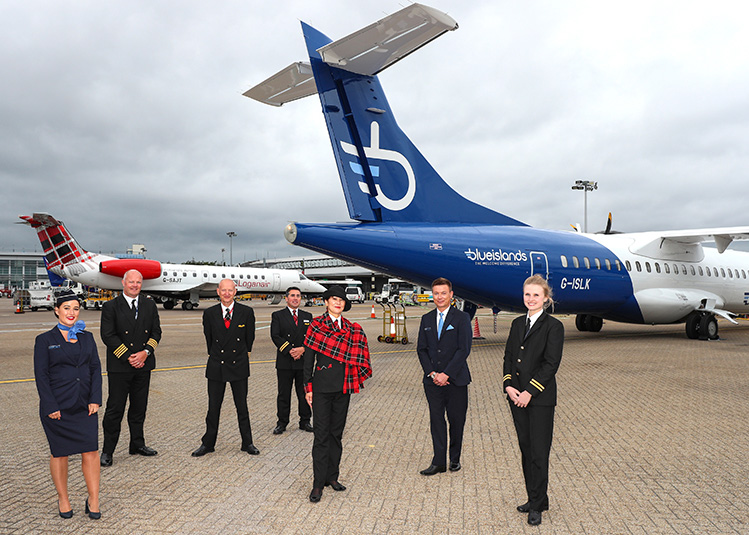 The Loganair and Blue Islands relationship partly came about from Loganair providing support to its sister carrier. “In summer 2021, we’ll have 11 daily flights at Southampton. We’ll have one entire aircraft there because of our Blue Islands partnership,” says Jonathan Hinkles, CEO Loganair.

Loganair and Blue Islands began their new partnership in September. “We’re like-minded carriers. Our partnership allows us to have what we couldn’t provide ourselves,” says Hinkles, citing the example of Glasgow, Edinburgh, or Newcastle over Southampton to the Channel Islands. “In summer 2021, we’ll have 11 daily flights at Southampton. We’ll have one entire aircraft there because of our Blue Islands partnership.”

The relationship benefits from spare aircraft capacity and the confidence arising from the two carriers working together. “We have been providing them with support on common areas. We have the same reservation system, for example. We have a good relationship with them.”

Loganair: “no ambition to have 60+ aircraft and look like flybe”

“We have a big plan for summer 2021 that is reasonable and rational,” says Hinkles. “We’re planning to have 41 aircraft by then, two fewer than expected at the beginning of coronavirus.”

This is down from the 43 to 50 aircraft the carrier thought it would have immediately before flybe’s end. Yet, “we have no ambition to get to 60+ aircraft and look like flybe.”

“In the longer-term, our Saab 340s are leaving the fleet – it’s been 15-18 years. They’ll be replaced with ATRs with 33 to 48 seats, or up to 70 seats,” Hinkles explains. “The ATRs are newer and more maintenance-efficient aircraft with a much lower trip cost than the Saabs.” And seat economics are “a different world completely.”

Hinkles says this will inevitably mean frequency “adjustments”. This may be interesting on predominantly domestic routes where frequency is disproportionately important – at least if there’s reasonable overland access.

This is maybe the point. “Shorter overland markets are under severe pressure for the foreseeable future,” Hinkles notes. “Historically, people would drive or take the train on routes of four hours or less. Now, that’s six to seven hours.” This will clearly influence Loganair’s network and future development.