Before starting at Brussels Airport in January 2020, Ihsane Chioua Lekhli worked as a journalist for Belgian public broadcaster VRT for 10 years. She began as an editor for a consumer news show, working on several election broadcasts during that time. 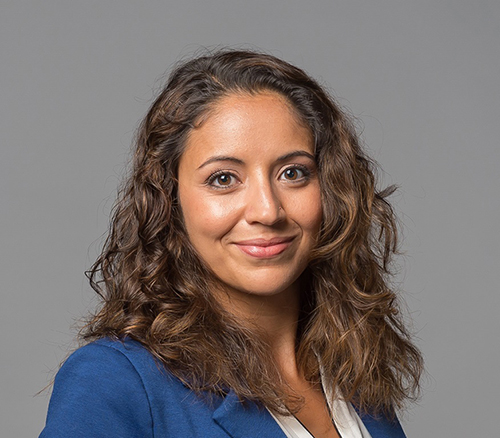 Ihsane Chioua Lekhli, Spokesperson & Media Relations Manager, Brussels Airport: “Facing a crisis just two months after starting has been challenging, but it also ensured I was able to get up to speed very quickly. In times of crisis you have to work closely together with your own team, and with other teams, and you have to communicate a lot, so I quickly learned the ropes and got to know a lot of colleagues in a short time. Informing the public regularly was very important as the situation evolved quickly.”

Chioua Lekhli then co-hosted a Sunday morning political debate show for four years. “It was always a little marathon in the weekend to get the show prepared, but it was a unique experience to be able to interview so many politicians and other interesting guests, as our panels were varied,” she explains.

In the last two years, Chioua Lekhli was focused on the daily news, mainly presenting reports and live coverage on politics, although she did a few reports on Brussels Airport at the time. “Election days were always a highlight for me as a journalist. Those were long working days following politicians across the country and ending at the party gatherings to get the first reactions to the results. It was a privilege to be on the front row at such days and at other important events.”

The next stage of her career saw Chioua Lekhli join Brussels Airport as Spokesperson & Media Relations Manager in January this year. She eloquently describes airports as vibrant places, where the entire world comes together, and connections are made.

“I love to travel myself and always loved travelling through Brussels Airport. Having the opportunity to get to know what happens behind the scenes, gain more insight into the airport activities, and be the one to communicate the stories of the airport, immediately appealed to me. The diversity of topics you deal with at an airport truly makes it a unique environment, from passenger figures and new airlines to security topics, from sustainability to cargo development, and so on.”

Chioua Lekhli’s experience as a journalist has, naturally, proven invaluable for the role of Spokesperson. “The insight into how journalists work and think has been very useful, as well as the network I have among journalists,” she says. “As a journalist, presenting information in a clear way is of utmost importance and those skills are necessary in communication as well. The flexibility and fast way of working you have as a journalist comes in quite handy as a spokesperson as well, because in both roles you know where your workday starts, but you never know how it will end.”

“In times of crisis collaborations are even more important”

It has been an unusual year in which to begin a new role in the aviation industry. Only two months after Chioua Lekhli started at Brussels Airport, Belgium went into lockdown for the first time and the impact on the airport was enormous. “But I truly enjoy working in the communication team, my colleagues have been very helpful from the start and I immediately felt part of the team,” she says. “My first priority was to get to know the company as well as possible. But, soon after, the main focus was crisis communication and keeping the public and press informed of all measures in place and of the important role the airport played even during lockdown, as it stayed open for essential travel, for repatriations and for cargo flights.”

The biggest challenge was, and still is, the unpredictability of the situation and how fast it can change. “The airport has implemented every available measure to ensure the safety of passengers and staff, and that meant various communications had to be prepared at short notice, some together with our airport partners, while all working at home,” Chioua Lekhli explains. “It was challenging but we made it work, and in times of crisis these collaborations are even more important.”

The combination of health and safety measures implemented by Brussels Airport has seen it awarded ACI Airport Health Accreditation. There are hundreds of information boards, stickers and posters to remind passengers that they must wear a face mask, keep a safe distance, and wash their hands. Hand sanitiser dispensers are available throughout the terminal, and there are mobile hand washing units in the departure hall.

“We also advocate contact-free processes for payments, check-in and boarding of passengers,” Chioua Lekhli comments. “We have installed additional queueing barriers and plexiglass screens, while before passengers enter the terminal their temperature is measured with thermal cameras. To reinforce our cleaning and disinfection actions, we also use UV sanitising technology to disinfect trolleys and floors.”

As part of its comprehensive sanitary measures, Brussels Airport recently took the initiative to open a COVID-19 Test Centre. Testing is an essential element to allow the aviation industry, and the economy in general, to gradually get out of the current crisis without compromising the health and safety of the public. “The Test Centre was received very well as passengers returning from a red zone were, up until a few weeks ago, obligated to get tested and had the opportunity to do that immediately at the airport,” says Chioua Lekhli. “As more and more countries require a negative test certificate, we see a lot of departing passengers make use of the Test Centre as well. Staff can also get tested, so for airline crew, for example, this is also a valuable option.” 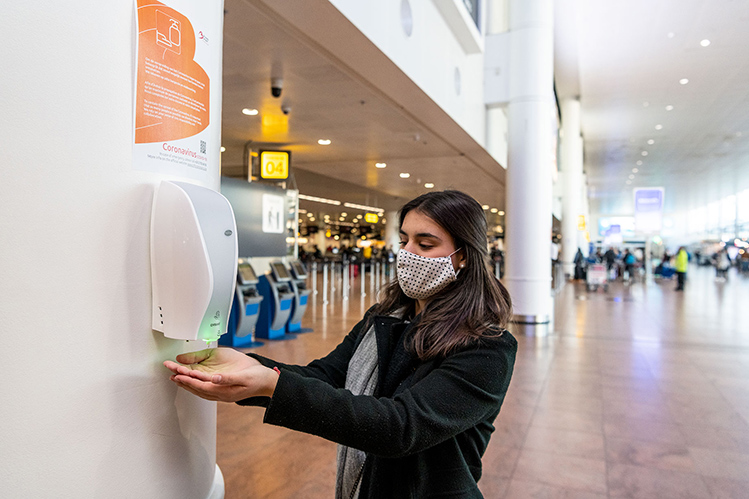 Brussels Airport has introduced comprehensive, increased health and safety measures in response to COVID-19. Information boards, stickers and posters remind passengers to wear a face mask, keep a safe distance, and wash their hands. Hand sanitiser dispensers are available throughout the terminal, and there are mobile hand washing units in the departure hall.

Chioua Lekhli looked forward to her first ACI EUROPE Annual Assembly & Congress. “I am honoured to be the Master of Ceremonies of this digital edition, which will be broadcast from our wonderful Skyhall. We are in the middle of an unprecedented global health crisis and we all may have different and creative approaches to address it, so I look forward to hearing the exchange of viewpoints, the debate in the working sessions, and to hear the different experiences of all partners involved. I am also looking forward to the discussion on sustainability, because even while tackling this health crisis, we cannot lose sight of the other challenges ahead. I expect to gain some new insights and will do my utmost to guide everyone watching as smoothly through the programme as possible.”

Looking ahead, from a communication perspective, it will be important to maintain and strengthen the trust of passengers that they can travel safely, keeping them informed about the measures in place at Brussels Airport.

Chioua Lekhli explains that, by next summer, Brussels Airport will be the testing ground for an innovative new test being developed by Belgian experts, which identifies particles in exhaled breath to quickly assess whether or not someone has COVID-19. Meanwhile, the cargo department will play an important role in the transportation of vaccines. A new 50,000sqm warehouse complex, with temperature-controlled areas, is near completion and will be a major project to communicate about. “These are all things that give hope for the future. Even though we are still facing difficult times, there are positive projects and solutions ahead.”

She began as an editor for a consumer news show, working on several election broadcasts during that time. Chioua Lekhli then co-hosted a Sunday morning political debate show for four years. In the last two years, she was focused on the daily news, mainly presenting reports and live coverage on politics, while also doing a few reports on Brussels Airport at the time.