Since the very beginning of the pandemic, ANA Aeroportos de Portugal has implemented new procedures and adapted facilities and services to the new sanitary requirements.

“This agile response allowed us to keep the airports fully safe and operational during the crisis, even during the lockdown, which was crucial for cargo activities and for humanitarian flights to bring people scattered all over the world back to their homes before air traffic was paused,” explains Thierry Ligonnière, CEO ANA Aeroportos de Portugal. “Our action plan was actually implemented even before specific health safety regulations were issued for air transportation, because we were truly concerned about how passengers and staff could feel about being exposed to risk, and we felt it was our responsibility to make them feel comfortable and protected being at the airport, but also before and after. So, we decided to go big and ensure the highest standards of sanitary protection, working with all our stakeholders and other national and international partners so as to guarantee consistently safe conditions in the end-to-end air travel experience.” 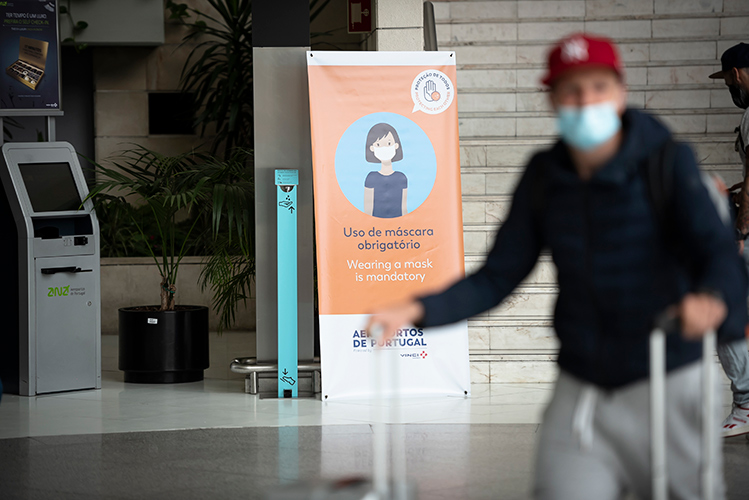 ANA Aeroportos de Portugal implemented the usage of masks before it was even mandatory and ensured that the passenger experience was as contactless as possible in all the steps of journey.

To maintain and adapt an appropriate response, ANA Aeroportos de Portugal has been continuously following-up all of its business parameters – health safety, facilitation, communication, marketing, operations, HR, etc – in its “crisis control tower”. “The participation of all of the directors, including innovation, really brought a wide array of skills to our management of such an unprecedented situation,” says Ligonnière. “It brought efficiency, transversally, and motivation to a new level.”

“ANA responded very quickly to the crisis: while national and international regulations were being discussed on which temperature control to use or which cleaning products to apply, ANA launched new processes to increase sanitary security in a record time,” Ligonnière comments. “As an example, at the end of March, we invested in walkthrough temperature-screening cameras and launched new disinfecting procedures, innovating with the utilisation of medical robotic UV cleaning equipment.”

Procedures were also adjusted to avoid unnecessary contact or queuing. At the beginning of April, ANA Aeroportos de Portugal set up glass partitions at all counters and installed gel dispensers and sanitary information throughout the terminals, which were later reinforced with a huge communication campaign launched throughout the VINCI Airports’ network. Passenger flows were altered in order to prevent concentrations, and counters were allocated alternately at check-in, security, border control, and boarding gates.

Shops, bars and restaurants adjusted their capacity and procedures, with staff committed to the new health requirements. Protection and disinfection kits were provided in vending machines very early in the process.

“Besides the additional cleaning and disinfection procedures, the air renewal system inside the terminals was also improved,” says Ligonnière. “In July, it took ANA only a few days to make a COVID-testing service available upon arrival, for certain origins, in order to apply the resolution of the Ministers Council. There again, we showed full reactivity to the evolution of the epidemy.” 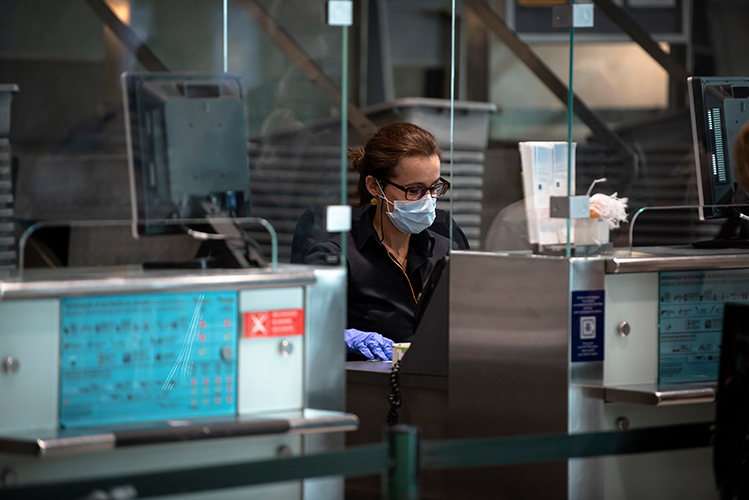 At the beginning of April, ANA Aeroportos de Portugal set up glass partitions at all counters and installed gel dispensers and sanitary information throughout the terminals, which were later reinforced with a huge communication campaign launched throughout the VINCI Airports’ network.

Lisbon and Porto airports are both certified by Turismo de Portugal and Bureau Veritas for their cleaning and sanitary measures. Indeed, ANA was the first in Portugal to advocate for a transversal health safety certification for all tourism stakeholders.

“This certification has been organised by Turismo de Portugal and we ourselves have been granted the ‘Clean and Safe’ label, in a ceremony with the Secretary of State of Tourism that took place in Lisbon Airport in June,” Ligonnière explains.

ANA also supported VINCI Airports in initiating, as early as May, a process to have the consistency and efficiency of its common pan-European safety plan evaluated by a recognised external entity, which would also audit its deployment in the Portuguese airports.

“It represented, again, after weeks of efforts of fast implementation, another significant amount of work to formalise the plan, check, process by process, that we were consistent with all local sanitary guidelines, and get confirmation through onsite audits that we were compliant,” says Ligonnière. “In short, we went through the development of a full sanitary contingency plan, formalised and audited, over just a few weeks.”

On top of the VINCI Airports Guidelines, audited by Bureau Veritas, and the application of EASA Guidelines and ACI Airport Health Accreditation, ANA is proud of the investment made in new technology and the highest cleaning standards.

ANA also implemented the usage of masks before it was even mandatory and ensured that the passenger experience was as contactless as possible in all the steps of journey. “In terms of innovation, one of the first implemented measures was a contactless system for temperature control set up in arrivals, allowing a fluid traffic flow during this health inspection,” Ligonnière explains. “We also tried out robotic UV equipment for cleaning larger areas and X-ray security screening.”

Because ANA also wanted to bring passengers into this collective effort and give them a possibility to challenge the efficiency of measures and deliver feedback, Lisbon Airport developed “U-Monitor” – an app that enables passengers to report any situation impacting their perception of sanitary safety (a dispenser that ran out of gel, someone not wearing a mask, distances not respected, etc). “They can do it onsite through their own smartphone, allowing our operational teams to solve any issue immediately,” says Ligonnière. “Using a contactless QR code system, passengers can give their feedback about all the implemented measures.”

He adds that recognition of all the work developed during this unprecedented situation is truly important. “Trust is the major factor for the recovery and for the sustainability of the aviation industry. Having national and international entities attributing sanitary and health certifications to our airports is a highly valued message to the aviation community and to passengers.” 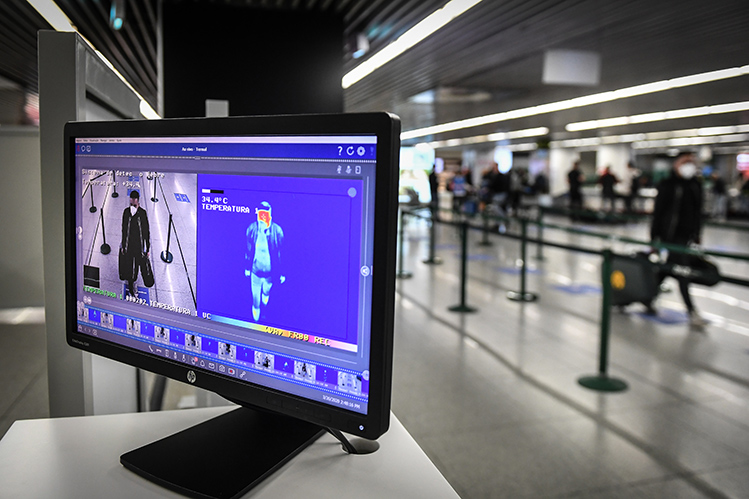 For quite some time, it had become clear to ANA and VINCI Airports that the passenger journey would have to be seamless, to minimise the processing time for passengers. The new health and sanitary needs gave an additional sense of urgency to progress in this direction and be as contactless as possible.

“Lisbon Airport is one of the five VINCI Innovation Centres of Excellence namely for Smart Terminal Operations and Technology, where new contactless solutions are implemented or adapted for more automated boarding procedures, without compromising safety or security,” Ligonnière explains.

An ongoing project is a pilot project called “Biometrics on the move”, which is being tested in two different stages of the passenger journey: at the self-baggage drop system and at immigration, using biometric data, without the need of any contact. “We are working within the VINCI group to share experiences in order to accelerate these innovation projects and achieve a full contactless airport,” says Ligonnière. “One example is the MONA project already deployed in Lyon Airport, tested in flights to Porto.”

Among the many solutions implemented at ANA’s airports are automatic self-check-in, contactless e-gates that only need to read the code in a boarding pass, vending machines with contactless payment, disinfecting gel operated by a foot pedal, and a temperature reading system, totally contactless, for arriving passengers.

Ongoing developments include a contactless screen technology for check-in kiosks, where the passenger can complete the process through remote-control via their mobile phone. “New solutions for flow management are also ongoing, involving virtual queuing which should be available very soon to our passengers, who will be able to pre-book a slot to process through security, without queuing,” Ligonnière comments.

There is a gradual individual and collective awareness of the new sanitary rules on the side of the passengers. Identifying their needs has been driving ANA’s efforts over the last years, and identifying their new expectations is becoming the next challenge.

“Recognising the quickly-changing trends that are occurring due to the new paradigm created by COVID-19, we launched the next step of our evolution,” says Ligonnière. “Passengers are increasingly aware of ways to mitigate the risk of contagion and have new requirements, counting on the airport to enforce measures and ensure the respect of new rules. We already have a number of ongoing projects, many of them based on new technology and innovation. Maintaining a process of improvement is more critical than ever, to prepare the future and reach ‘the new Excellence’.”