It is the second consecutive year in which a Riga Airport project has received a prestigious award. Last year, a joint project by the airport and the creative agency TBWA\Latvija – “Riga Airport Symphony” – was also recognised. 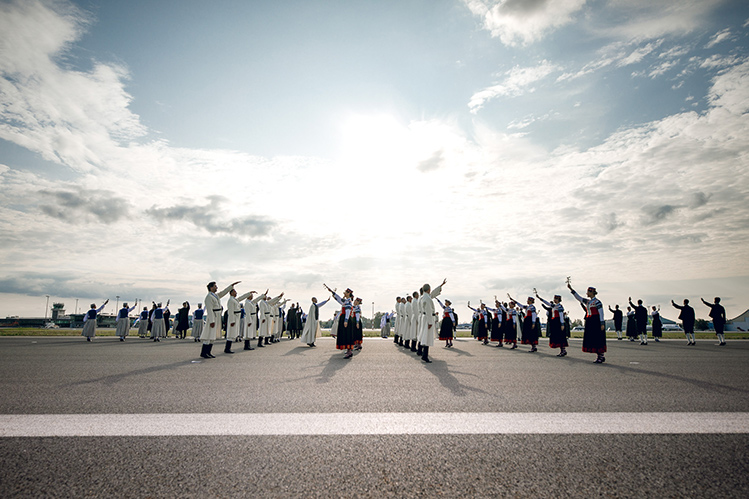 Last August, Riga International Airport celebrated the 30th anniversary of the Baltic Way with a special performance of Latvia’s national dance – Gatves Deja – on its runway. The performance has now won in the “Event Organisation” category at the prestigious “IPRA Golden World Awards 2020”.

“The Gatves Deja dance that we danced on the airport runway in the morning of the 30th anniversary of the Baltic Way was heartfelt work of the entire airport staff, dancers and technical staff,” says Laura Kulakova, Head of the Communication Unit at Riga Airport. “Each and every one of the thousands of spectators who watched on their screens as 100 dancers from Mārupe and Babīte municipalities danced one of our most beautiful national dances under the flags of the three Baltic States could feel it. The emotions we gained and gave with this dance have not disappeared today. It is impossible to forget what was said by Dainis Īvāns, leader of the National Awakening movement: ‘The Baltic Way was a turning point, a turning point in our hearts, we became determined, brave, we became proud. And it is why today everything in Latvia belongs to us. We can go wherever we want, there is a free Baltic sky above our heads. Today I am greeting you once again on the runway of the free state of Latvia. We are standing on the Baltic Way, we continue the Baltic Way, and we are still flying towards freedom.’ I am very proud that with this project we can bring the story of freedom of Latvia into the world, a story showing that with the strength of spirit and song it is possible to overcome even the rudest power and that nothing can stop the desire for freedom.”

The Baltic Way took place on 23 August 1989, when two million inhabitants of Latvia, Lithuania and Estonia joined their hands connecting the capitals of the Baltic States – Tallinn, Riga and Vilnius – with a 675.5 kilometre long human chain to commemorate the Molotov-Ribbentrop Pact signed on 23 August 1939 between Germany and the USSR, and to support each other in the struggle for the common goal of regaining the independence of the Baltic States.

Four dance groups from the airport’s local community, Mārupe and Babīte, participated in the dance on the runway. They were dressed in the national costumes of the four historical regions of Latvia: Kurzeme, Vidzeme, Latgale and Zemgale.

More than 70 airport employees, almost 20 technical staff of partners, and more than 100 dancers and their leaders, gave their contribution to the performance. Thanks to careful preparation, rigorous planning, and the coordinated actions of all the airport services involved, the performance, including installation of broadcasting and audio equipment, could be prepared in just over half an hour between two flights, without delaying any air services.

The performance was filmed with multiple cameras, and also from a drone, and was live-streamed on social networks and several major Latvian internet portals.