What the future for airport economic regulation should look like

The impact of COVID-19 on airport pricing makes it imperative for EU regulators to adapt the regulatory framework in order to enable the recovery of airports and the entire aviation sector. Jonathan Sandbach reports.

The economic regulation of airports, already under review by the European Commission prior to the COVID-19 pandemic, has taken on a new urgency and focus.

As aviation emerges from the pandemic the competitive landscape in which airports operate will have changed dramatically. Airport capacity is likely to be underutilised for some time and airports will need to compete to attract the return of airline fleets and routes. As industry bodies have recognised, the way airport charge controls (where applied) are set will be critical to the industry’s ability to recover.

The existing approach of matching costs and revenues for regulated airports is not capable of responding to the catastrophic loss of passenger traffic and revenue generation suffered by airports, airlines and service providers alike.

This article considers how airport charge controls, if still necessary, will need to evolve alongside the myriad of other operational challenges faced by airports in order to promote recovery of traffic and to provide incentives for investors to support the ongoing use and development of the infrastructure.

The first principle which should be considered is flexibility. Airports should develop charging strategies that will incentivise airlines to utilise airport capacity. This will help to bring back lost traffic and bring down average costs per passenger across all airlines. Applying the same charges to all airlines will not achieve this objective.

By historical consensus, leisure is the most price-sensitive form of aviation traffic, followed by visiting friends and family, with business the most insensitive despite being possibly the slowest to return after the pandemic. Assuming this continues to hold as lockdown measures begin to be eased, lower airport charges for leisure passengers will benefit both airports and airlines by allowing growth in the most price-sensitive segment of the market. Whilst it is not feasible to directly vary airport charges by these segments, these segments do correlate with different airline types (e.g. more leisure travel is on low cost carriers, and more business travel is on full service carriers). Allowing airports flexibility to negotiate individual airline deals, albeit within a framework of an overall cap on average charges per passenger, enables these passenger attributes to be reflected in airport charges, as well as taking account of the ability of the airline to bring back routes and passengers to the airport.

Flexible pricing across airlines will benefit consumers by allowing airlines to reach price-sensitive segments of the market for whom otherwise air travel would be unaffordable.

There is no question that airlines face a major cashflow challenge in the face of the pandemic. Government financial support in many countries and lower fuel charges will help in some cases. Lower airport charges, at least for a period, may also have a role to play.

One challenge will be to reduce the impact of airport charges on airlines without damaging the ability of airports to cover costs and finance investment. Figure 1 shows how this can be done by deferring aeronautical revenues: 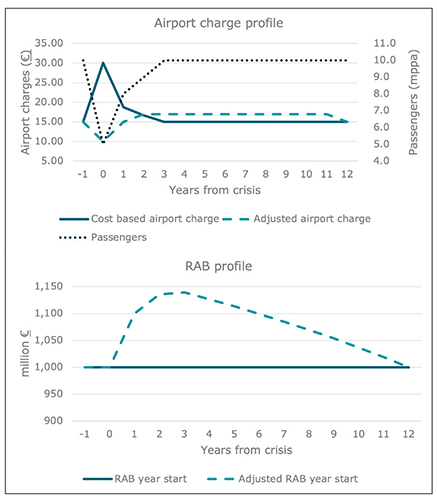 This deferral mechanism has some positive features – lower airport charges will encourage airlines to re-enter the market quickly where routes are permitted. Investors, through the RAB mechanism, will retain confidence to invest.

A particular case of revenue deferment occurs if the method used to calculate depreciation changes from a fixed proportion of an asset’s cost (e.g. traditional straight-line depreciation) to one based on a per passenger unit. This will have the effect of deferring depreciation, and hence revenue recovery, from the period of low passenger volumes to when passenger volumes return. Similar approaches have been applied in other industries, such as telecoms.

Passenger forecasts are one of the most important inputs for airport charge regulation, and uncertainties around passenger volumes are the greatest source of risk for an airport. Passenger forecast contingency margins can be built into forecasts based on the “average shock” over a 10-15 year period (as in Heathrow’s Q6 2014-2019 charge control). The COVID-19 pandemic will have a very material impact on these risks. A view will need to be taken on the likelihood of an analogous incident in future regulatory cycles.

The impact of the COVID-19 pandemic is that many airports will have spare capacity for a period of time. Where airports compete to win routes, the resulting charges may fail to provide a full return on sunk investment even under the RAB framework proposed above unless an appropriate cost of capital is applied. It is inevitable that the cost of capital will rise as investors perceive a greater risk of asset write-down and under-recovery of costs in future. This may already be apparent from the movement in stock prices for Europe’s largest airports. Figure 2 shows the “Beta” (a measure of non-diversifiable risk) of three major European airport groups, indicating how risk perceived by equity investors has risen since February 2020. 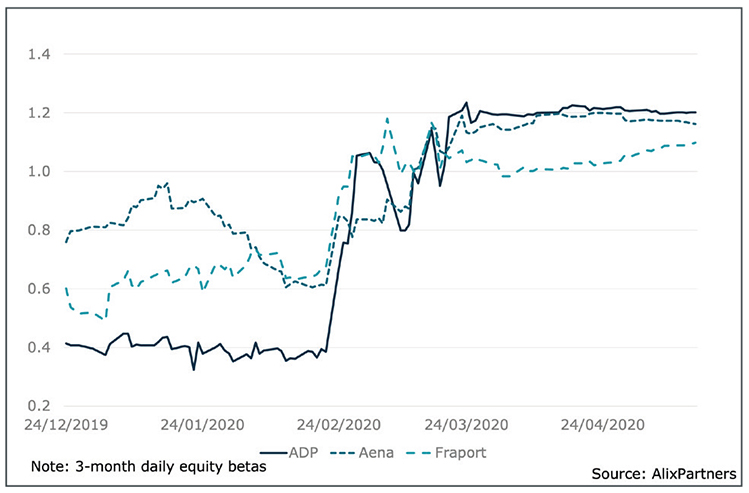 Regulators will need to consider how the current pandemic will affect expected investor returns for future airport investment (the cost of capital) whenever they assess the level of airport charges and costs in future regulatory cycles.

Adapting the regulatory framework to the post COVID-19 aviation market will be important for the recovery of the aviation sector. This article has identified several elements which airports, regulators and airlines need to explore.