Budapest Airport, which celebrates its 70th anniversary in 2020, has won the Skytrax Award for ‘Best Airport in Eastern Europe’ for a record seventh consecutive year. The award was presented as part of the World Airport Awards, unconventionally, in virtual form. 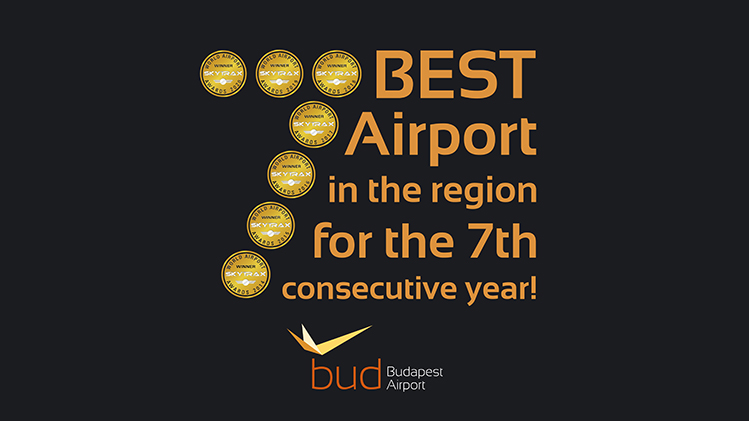 On the occasion of the handover, Edward Plaisted, CEO of Skytrax, emphasised that Budapest Airport has good reason to be proud of the accolade, as it has proven to deliver high quality passenger services for seven years now, based on the feedback of travellers flying in the region. Passengers especially appreciated Budapest’s extensive route network in 2019.

Every year, the Skytrax Award is decided by passengers, as part of a satisfaction survey where travellers are asked about airport services, check-in, the quality of passenger services, and security standards, among other things.

“I am delighted that we have managed to retain the ‘Best Airport in the Region Award’ for several years,” says Dr. Rolf Schnitzler, CEO Budapest Airport. “The award confirms that Budapest Airport has made great progress in improving the passenger experience last year as well. Passengers clearly feel and appreciate the increase in service quality. The aim of our developments is to continuously improve passenger convenience and satisfaction. I am proud of my colleagues, the BUD team, with whom we will continue our work to provide the best services to passengers going forward.”

Kam Jandu, CCO Budapest Airport, adds: “Besides being a source of great pride, winning the Skytrax Award again gives us extra strength and stamina in these tough times; moreover, it confirms that Budapest Airport remains on the right track in the area of passenger experience improvements.”

Budapest Airport is a not only a strategic facility of key importance for the country, but also the aerial gateway to Hungary. Over the past two years, the airport has spent more than €140 million on developments. In 2019, new projects focused on digital innovation and enhancing the travel experience for all passengers. The security screening process has been accelerated and became more calculable, and passengers can now leave large electronic items in their hand baggage during screening. Waiting times dropped below 15 minutes, even during the peaks.