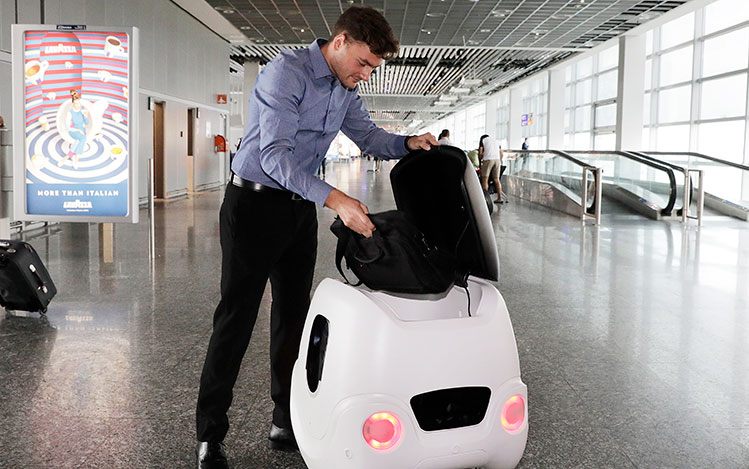 During the initial phase of the trial, passengers placed their small luggage in the robot’s luggage compartment and let YAPE guide them to their gates.

Frankfurt Airport (FRA) has introduced a new self-driving guide robot, called YAPE, to accompany passengers to their gates and help them transport their luggage.

The AI-based transport and delivery robot is developed by Yape Srl, a company of Italian hi-tech manufacturer e-Novia, and was deployed in FRA’s transit area for five days. During the initial phase of the trials in FRA’s Pier A Terminal 1, a smartphone app was used to interact with the robot. Passengers placed their small luggage in the robot’s luggage compartment and let YAPE guide them to their gates. Thanks to its integrated navigation system the robot is able to freely move through the terminal. According to the airport, in the next phase the robot will interact autonomously with passengers.

YAPE can carry up to 30 kilograms at a speed of about six kilometres per hour indoors. Since the self-driving electric robot senses its surroundings, it is able to circumvent obstacles. By trialling the autonomous transport robot, Fraport aims to test new ways of enhancing the passenger experience, while at the same time reducing staff workload.