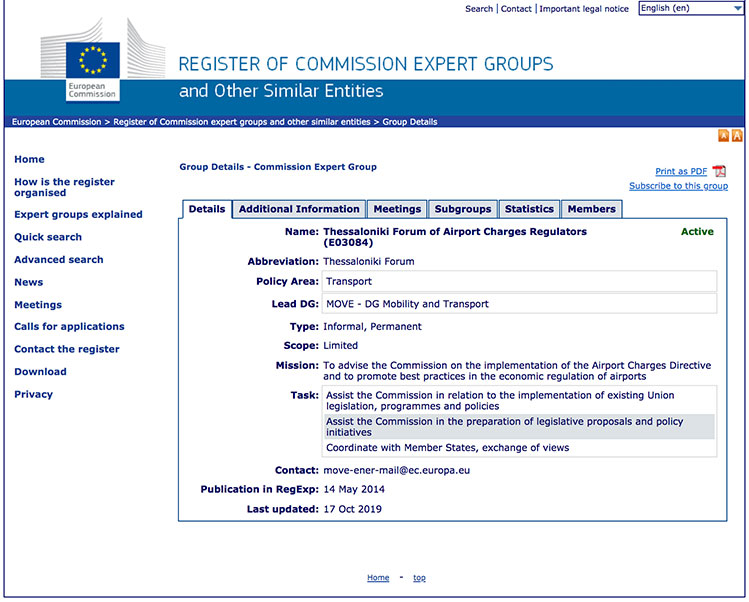 The mission of the Thessaloniki Forum is to advise the European Commission on the implementation of the Airport Charges Directive and to promote best practices in the economic regulation of airports.

The initial objective for the Thessaloniki Forum of Airport Charges Regulators, set out in 2014 by the European Commission, was to “help with the exchanges of best practices on airport charges regulation in the Member States”. Pepi Lykou from the Hellenic Civil Aviation Authority is rapporteur of a working group of the Thessaloniki Forum, and briefed Ross Falconer on its activities.

In May 2014, a European Commission communication on the Airport Charges Directive officially established the Thessaloniki Forum as a group to facilitate the exchange of best practice between independent supervisory authorities and to discuss findings on the application of the Airport Charges Directive. The Forum has had to recognise the variety of ways that member states have implemented the Directive.

The Forum meets regularly to discuss matters with a pan-EU angle, including EEA and Switzerland, concerning the common framework for regulating airport charges in the scope of the Directive 2009/12.

“For each thematic issue addressed – consultation, transparency, non-discrimination, Weighted Average Cost of Capital (WACC), market power assessments, selective criteria in the economic regulation of airports – the Forum submits a paper with recommendations to the European Commission,” explains Pepi Lykou from the Hellenic Civil Aviation Authority, who is also rapporteur of a working group of the Thessaloniki Forum. “It is also the place for regulators and industry to sit at the same table and exchange views that will underpin the proposals of the Forum. As a result, the recommendations embed national best practices that are recognised and endorsed by the plenary of the Forum, reinforced by the contributions of the associations representing the interests of the users.”

The difficulties in effective benchmarking

The Forum this year established a working group looking at the complex topic of benchmarking, which covers a divergent range of views and existing regulatory systems.

“The Forum recognises that there are difficulties in effective benchmarking in the airports sector related inter alia to the heterogeneity of EU airports, insufficient comparable data publicly and easily accessible, and differing national regulatory frameworks,” Lykou comments. “The central objective is to delineate the appropriateness of this tool in assessing an airport’s performance and the level of charges it applies against comparable airports, for regulatory issues.”

The same working group is looking at the topic of remedies that an authority can apply if an airport is found to have significant market power.

“Consultation, transparency, non-discrimination and cost-relatedness are in the interest of all parties,” says Lykou.

The Forum has published papers on a range of topics in recent years, as ‘guidance’ to national authorities. Lykou highlights one example of this guidance being used: “an ever-growing convergence with the recommendations on consultation and transparency.”

There are many interpretations on what ‘consultation’ means, so can common ground be found? “As a common ground, endorsed by the Directive, consultation is a necessary advisory procedure, the results of which are not legally binding for the airport but are subject to a claim procedure submitted to an independent authority for examination,” says Lykou. “The enhanced transparency and in-depth analysis of the figures and the policies presented by an airport, as well as a clear analysis of the required traffic-wise contributions by airlines, delimit the qualitative value of each consultation.”

“It is the added value of all parties working together, which truly elicits the real and meaningful outcome of the Forum. As a metaphor, I would say that the Forum is rather like the Agora in ancient Athens where ideas from all stakeholders take roots and flourish.”

Lykou emphasises that the Thessaloniki Forum does not intend to push the regulation into either interventionist or hands-off directions. “It is a Forum for discussing common enforcement challenges and best practices among regulatory authorities. There has been no voice that has advocated quitting this process of putting regulatory issues on a common table and cultivating the contacts of connected interest groups.”

In the near term, the Forum will reflect on previous papers. Lykou notes that the next steps will be decided by the plenary, choosing those topics that require further analysis. “The views of the industry will be also taken into account when deciding on future papers.”