This year’s ACI EUROPE Best Airport Award in the ’10-25 million passengers’ category went to Lyon-Saint Exupéry Airport, which was recognised for its new terminal with enhanced intermodal connectivity and its state-of-the art operational control centre and security technology. 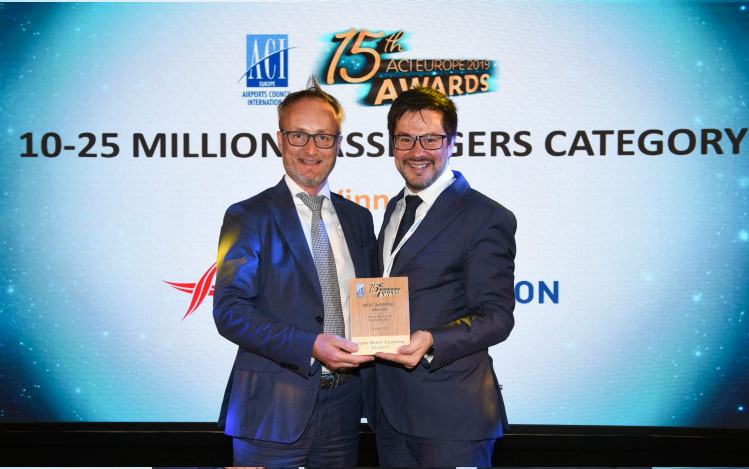 “This is an important award in two respects,” begins Tanguy Bertolus, CEO Lyon-Saint Exupéry Airport. “It acknowledges the relevance of VINCI Airports’ development strategy at Lyon-Saint Exupéry, which strikes a balance between growth, quality of service and corporate social and environmental responsibility. This award also comes in recognition of all of the airport teams for their active involvement and understanding of the importance of increasing traffic, customer service, and reducing the environmental impact of our activities.”

The airport saw passenger traffic increase by almost 8% to 11 million in 2018, and the trend has continued with 8.6% growth in the first half of 2019.

“Over the past three years, Lyon-Saint Exupéry has put to good use the expertise and tools of VINCI Airports to identify new routes with high potential and to support airlines in launching new destinations,” says Bertolus. “It’s a winning formula, with 21 new services opened in 2018 and a further 14 in the summer 2019 period alone. Growth of nearly 8% in 2018 is in line with the 27% growth in traffic over the last three years.”

To support this growth, the airport has rolled out innovative services for its passengers and airline partners. For example, its operational efficiency has been enhanced by the full implementation of Airport Collaborative Decision Making (A-CDM), as well as creation of the only Operations Command Centre of its kind in France.

The awards judges highlighted Lyon-Saint Exupéry Airport’s focus on a digital passenger experience. The world’s first outdoor robot valet parking service has been tested and deployed. “This innovation is developing as planned and has already met initial service quality expectations, with a 96% customer satisfaction rate and a reduced environmental impact,” Bertolus explains.

Meanwhile, the baggage transfer service from start-up Eelway is to be extended across all terminals – the start-up collects passengers’ baggage from the reclaim area and transfers it directly to their destination.

Lyon-Saint Exupéry Airport has a similarly progressive approach to the environment, in line with VINCI Airports’ AirPact policy. It recently renewed its certification at Level 3+ Neutrality of ACI’s Airport Carbon Accreditation.

“With a 35% reduction in CO2 emissions per passenger in three years, the figures speak for themselves,” Bertolus comments. “In line with VINCI Airports’ commitment to developing a strong local base, Lyon-Saint Exupéry has also ensured that its local area benefits directly from its development, by making it easier for residents of neighbouring municipalities to access job vacancies at the airport. Lyon-Saint Exupéry also supports local community and cultural life by funding more than 60 charities in the surrounding area.”

Under VINCI Airports’ leadership, Lyon-Saint Exupéry Airport has restructured to become totally customer-centric. The digital journey is constantly being improved, and short-term goals include rolling out dedicated passenger journeys by customer type and increasing the selection of shops and restaurants.

The airport is continually developing its connectivity. Low-cost services could grow from a 40% to 50% market share. Meanwhile, the success of the Dubai and Montréal routes shows the potential of the Lyon region for long-haul services, and Bertolus explains that the airport is working hard to introduce direct services to China and the US in the near future.

“Our new passenger capacity, thanks in particular to the opening of the new Terminal 1 in October 2017, will allow us to grow without any restrictions in capacity in the coming years – few airports in Europe have this opportunity. Nevertheless, this development can only happen with a significant reduction in the environmental impact of our activities, as per the targets set by AirPact, VINCI Airports’ environmental policy. This is why we will be ramping up our policy to reduce CO2 emissions by making very ambitious pledges for the coming years.”