The 29th ACI EUROPE Annual Assembly & Congress, hosted by Hermes Airports, took place in Limassol on 25-27 June 2019. The theme of this year’s event was Transform or die – Airports & the Sustainability challenge.

The Annual Congress saw the announcement of a Resolution formally committing the European airport industry to become net zero for carbon emissions under its control by 2050, at the latest. So far, 194 airports run by 40 airport operators across 24 European countries have committed to the same objective. The NetZero2050 commitment occurred as part of ACI EUROPE launching a comprehensive Sustainability Strategy for Airports.

Meanwhile, the 15th Annual ACI EUROPE Best Airport Awards were also announced during the Gala Dinner at the event.

Next year’s 30th ACI EUROPE Annual Assembly & Congress will be hosted by Geneva Airport on 16-18 June 2020, on the occasion of the 100th anniversary of the airport. 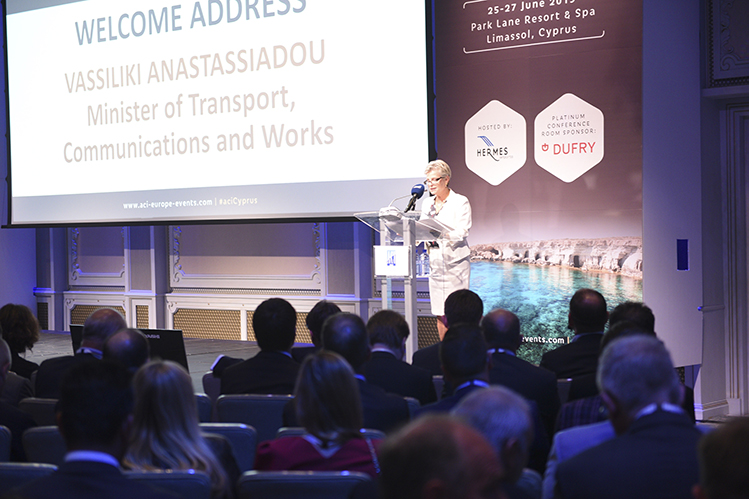 Vassiliki Anastassiadou, Cyprus’ Minister of Transport, Communications and Works, opened the conference with a welcome address. The Minister voiced the government’s support for the aviation industry, stressing that it is important to ensure the sustainability of international competition within the European aviation sector, while considering the particularities of each member country. 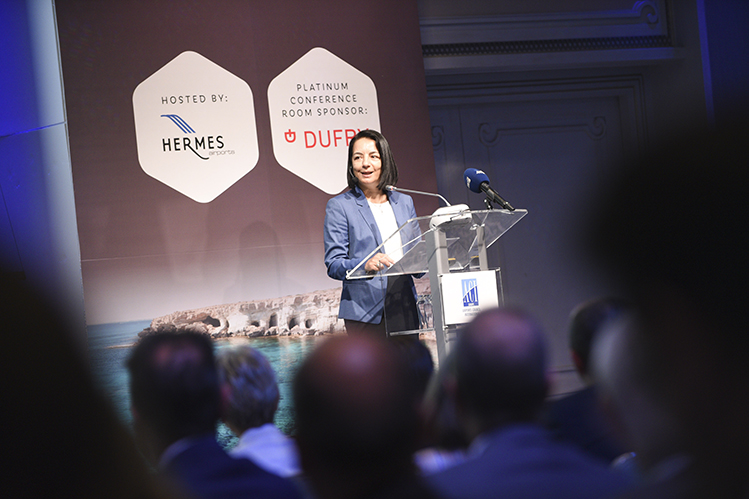 Eleni Kaloyirou, CEO Hermes Airports, delivered the Welcome Address from the Host. “Tourism contributes 14% to Cyprus’ GDP, and it was the tourism industry which enabled the country to recover swiftly from the financial crisis of 2013,” she commented. 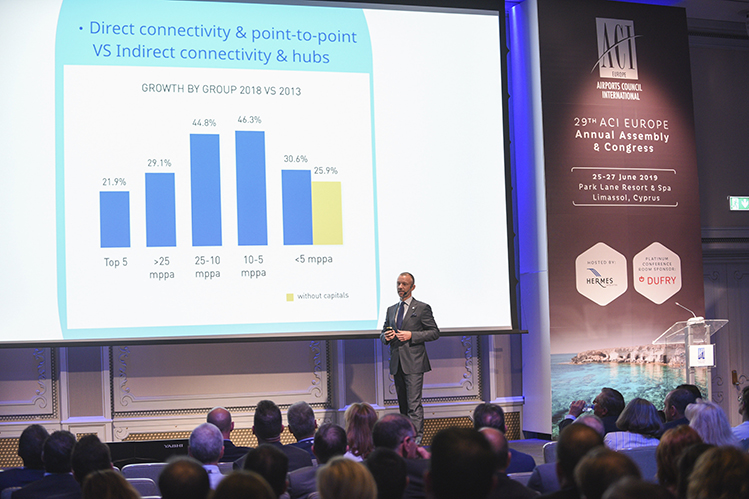 Olivier Jankovec, Director General, ACI EUROPE, addressed the state of the industry. “There are signs that the traffic momentum is fading for Europe’s airports. A synchronised slowdown in the global economy and significant geopolitical risks are combining with volatile oil prices, ATM disruptions and overcapacity to exert downward pressures on both demand and supply.” 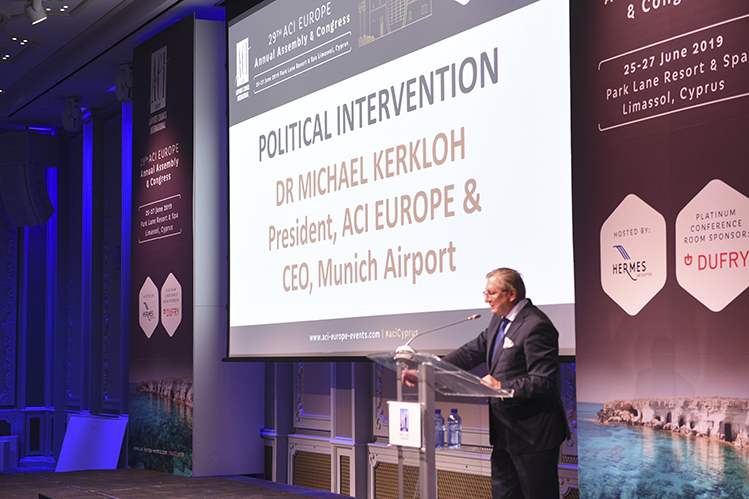 Dr Michael Kerkloh, CEO Munich Airport, and Immediate Past President, ACI EUROPE, delivered a Political Intervention and also launched the NetZero2050 commitment. “Europe’s airports have been leading climate action with annual reductions announced every year for the past decade. 43 of them have actually become carbon neutral, supported by the global industry standard Airport Carbon Accreditation. However, today’s commitment brings a new dimension to this – no offsets. Crucially, with its NetZero2050 commitment, the airport industry is aligning itself with the Paris Agreement and the ambitions of the vast majority of EU countries.” 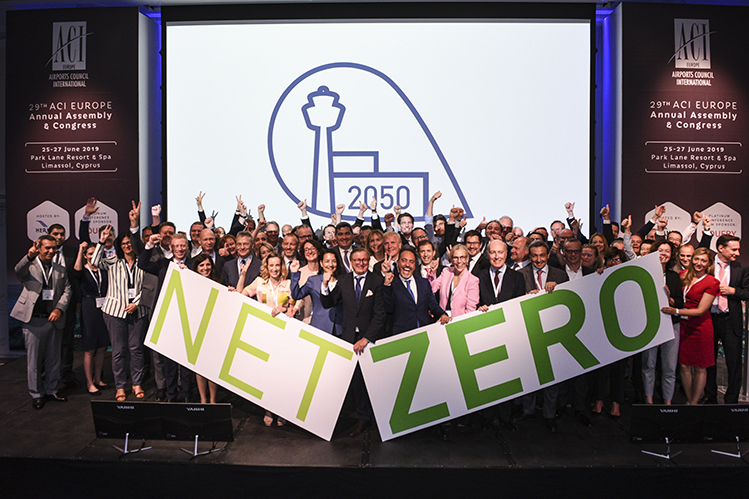 ACI EUROPE unveiled a Resolution formally committing the European airport industry to become net zero for carbon emissions under its control by 2050, at the latest. The pledge is further backed up so far by 194 airports run by 40 airport operators across 24 European countries, with each of them individually committing to the same objective. 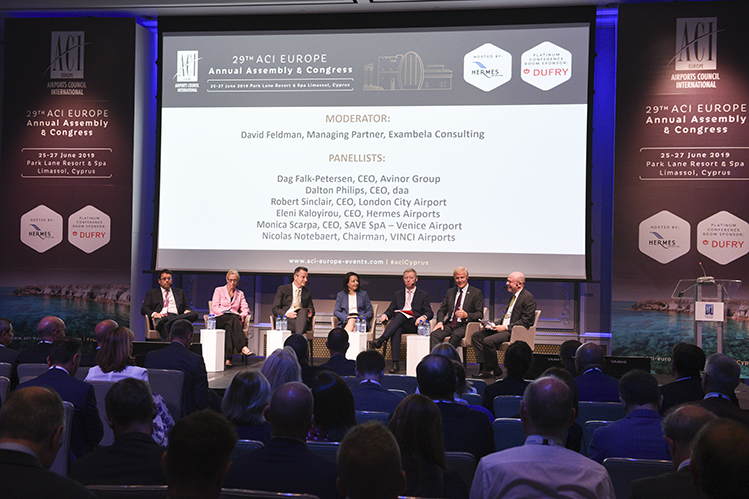 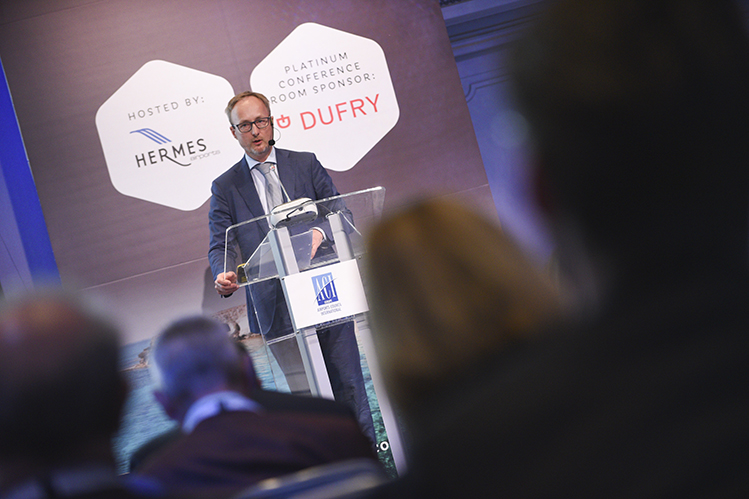 Filip Cornelis, Director for Aviation, European Commission, gave a special presentation – European aviation policy: where are we & what next? 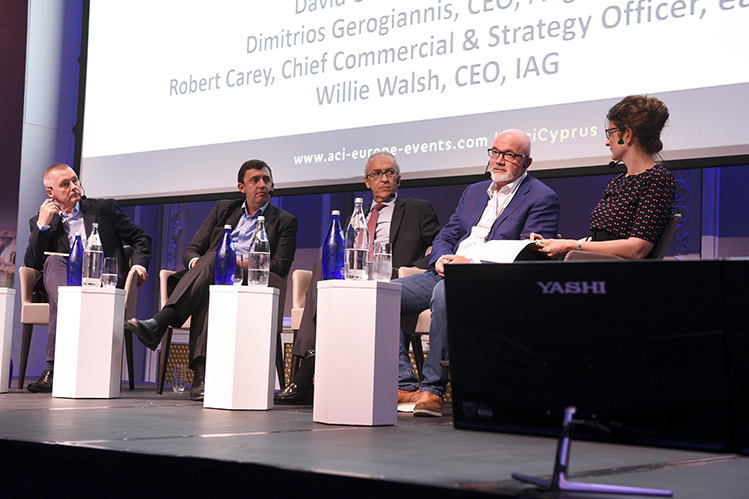 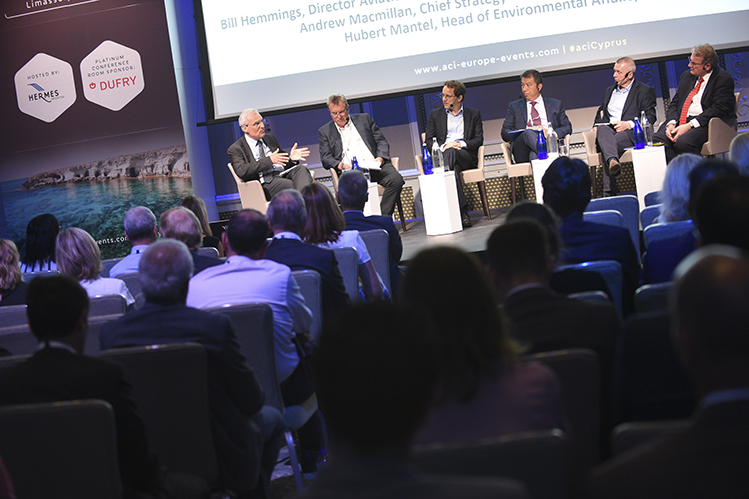 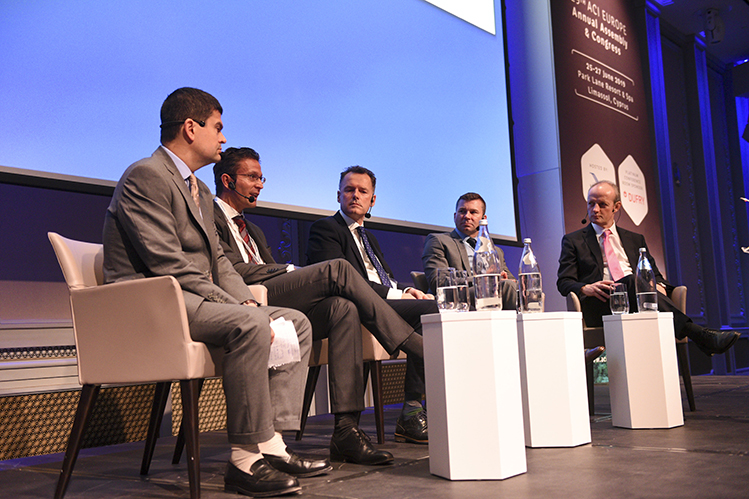 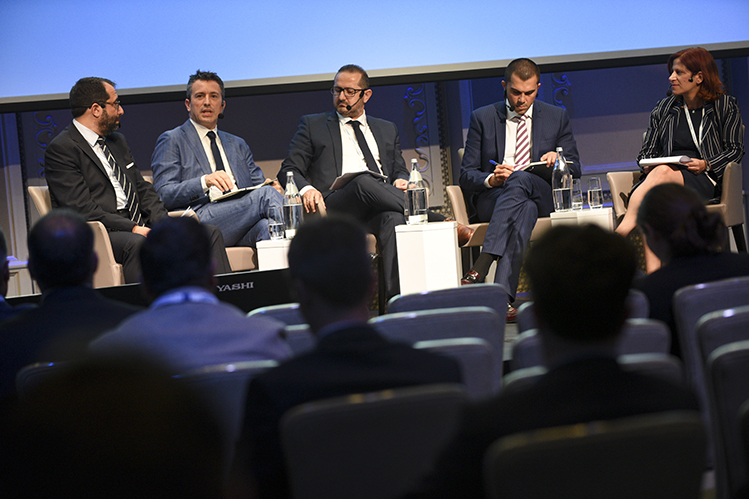 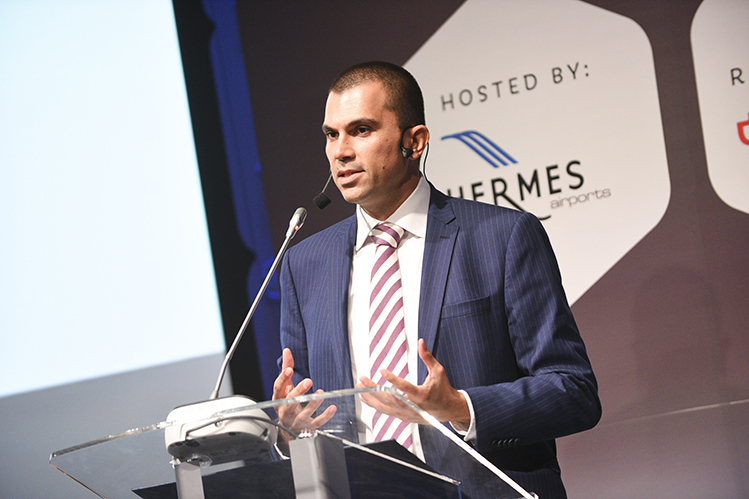 Savvas Perdios, Deputy Minister Tourism, Republic of Cyprus, delivered a keynote address ahead of the Fifth Working Session: Sustainable Tourism (Era of Partnerships). “Only 25% of our four million tourist arrivals each year are in winter. Our target is five million arrivals by 2030, with 40% during the winter months, while developing all regions of our island.” 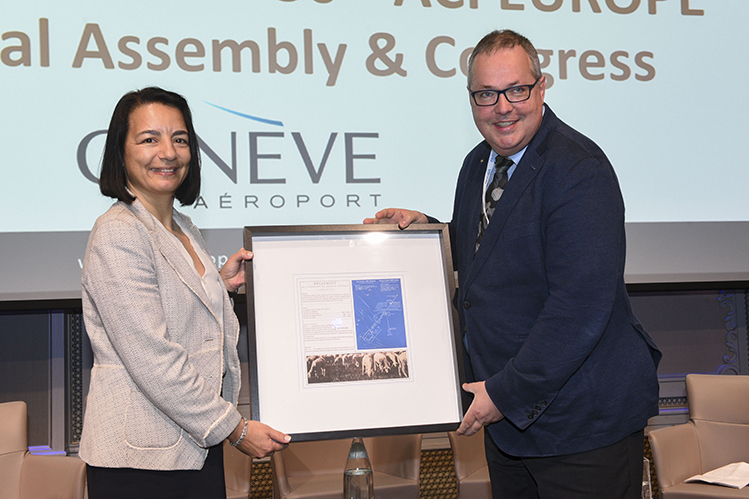 Next year’s 30th ACI EUROPE Annual Assembly & Congress will be hosted by Geneva Airport on 16-18 June 2020, on the occasion of the 100th anniversary of the airport. The official handover was performed by Eleni Kaloyirou, CEO Hermes Airports, and André Schneider, CEO Geneva Airport. 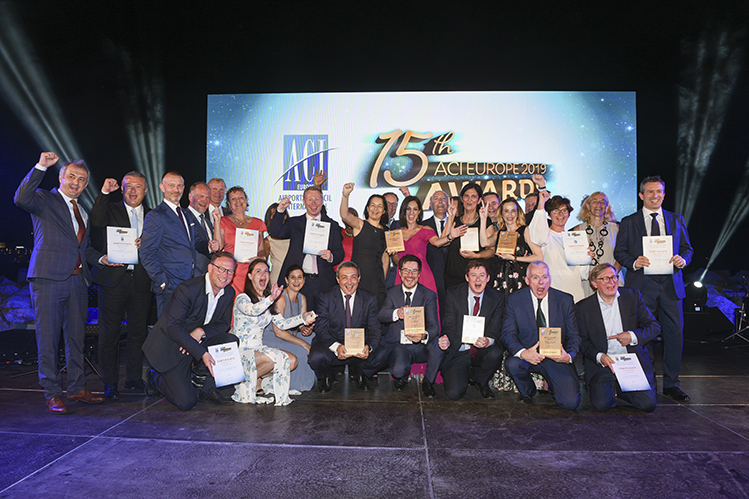 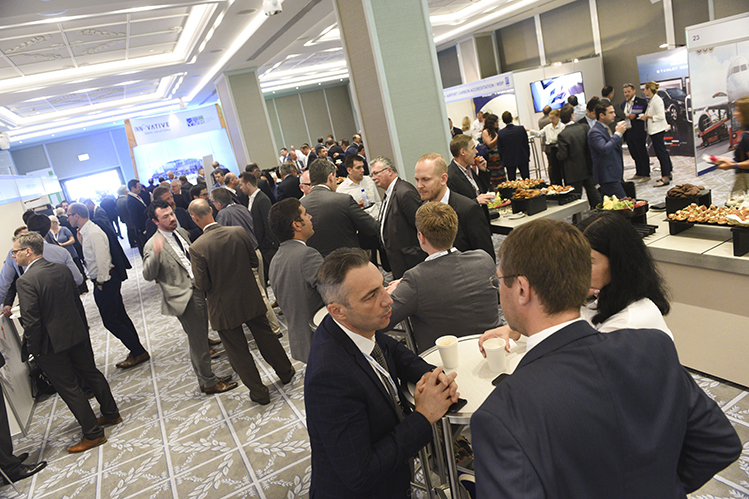 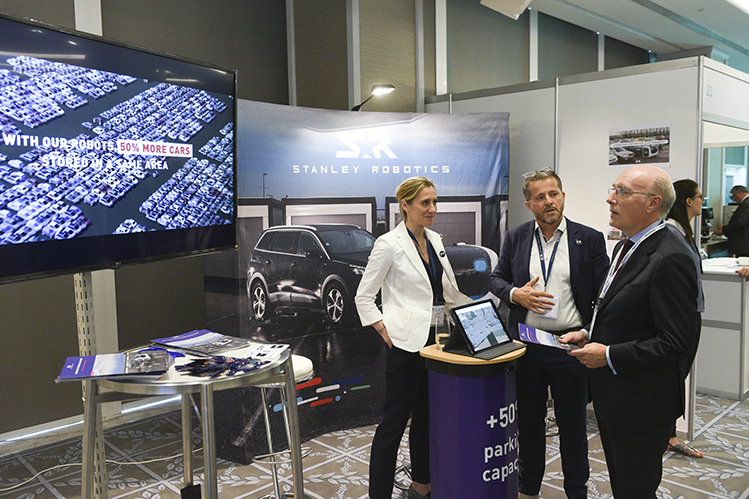