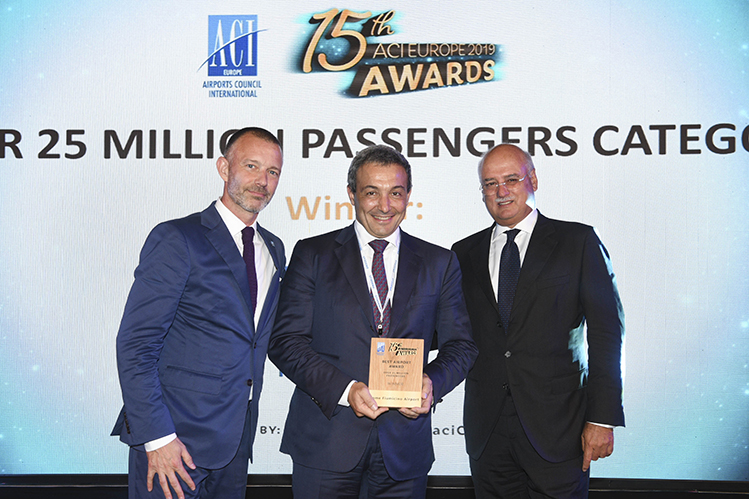 This year’s ACI EUROPE Best Airport Award in the ‘over 25 million passengers’ category went to Rome Fiumicino. It is the second consecutive year that the airport has triumphed in the category.

Rome Fiumicino Airport excels in linking its operational excellence to its effective passenger-centric approach. The judges were impressed by the airport’s strong focus on innovation – such as the SESAR Airport Operations Plan – both in terms of technology and people management. The airport was also recognised for its safety management strategy, close cooperation with the airlines, continuous performance monitoring, clear environmental targets and active local engagement.

“We’re very proud to have won the award again – it’s come as a result of the hard work of our staff, ENAC and ENAV partners, border police and Alitalia just to mention a few,” says Giovanni Castelluci, Atlantia’s Managing Director. “We’re determined to continue making the airport even better, helping the airlines that are based there to be more competitive when dealing with the ever-increasing global challenges.”

Ugo de Carolis, CEO Aeroporti di Roma, adds: “It’s all about recognition for Fiumicino, having won the Best Airport Award for a second time. Amongst the contributing factors was above all respect for the environment – yesterday [26 June 2019] together with another 194 airports we signed up to reaching net zero carbon emissions by 2050. In addition, we are committed to finding solutions to make the passenger experience as easy and straightforward as possible. There’s still a lot to do, because an airport as big and as important as Fiumicino can only be improved with consistent hard work day in, day out.”