“Positioning Keflavík as an important hub for transatlantic travel”

Iceland is known as ‘The Land of Fire and Ice’, and is famous for the majestic beauty of its natural landscapes. Tourism is, therefore, a vital part of the country’s economy, generating about 10% of Icelandic GDP in 2016 according to Statistics Iceland. Visitor numbers grew by 5.5% to 2.3 million in 2018 (several times the country’s population of 350,000).

Indeed, tourism has played a hugely important role in reviving the country’s economy after the financial crash of 2008.

The spectacular volcanic eruptions in the last decade – including the Eyjafjallajökull eruption, which disrupted air travel in 2010 – put Iceland firmly on the global map. Awareness among potential visitors has only been further enhanced by the success of its national football teams (the men’s team reached the quarter finals of Euro 2016, while the women’s team is ranked 19th in the world by FIFA), and by national marketing campaigns such as ‘Inspired by Iceland’. 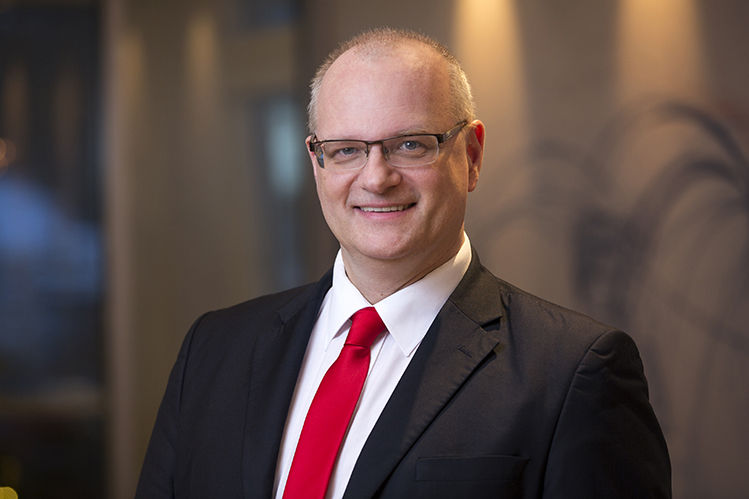 Björn Óli Hauksson, CEO Isavia: “One of our main sources of pride, along with our dedicated and resourceful staff, has been our fast turnaround and connection times. This operational plan, to use Keflavík Airport as a hub, has increased the number of destinations on offer to Icelanders and travellers from all over the world.”

Isavia’s Keflavík Airport, the main gateway to Iceland, has been central to facilitating growing tourist numbers, and has seen rapid growth – doubling from 4.8 million passengers in 2015 to 9.8 million in 2018.

“There are many reasons for the success – the first is the location of Keflavík as a hub for travel between Europe and North America,” begins Björn Óli Hauksson, CEO Isavia. “One of our main sources of pride, along with our dedicated and resourceful staff, has been our fast turnaround and connection times. This operational plan, to use Keflavík Airport as a hub, has increased the number of destinations on offer to Icelanders and travellers from all over the world. They have been close to 100 in the last few years, compared to only a few dozen just a short while back.”

Following the exponential growth of recent years, including 12% last year, the forecast in 2019 is an 8.7% decrease to 8.9 million passengers. “The greatest decrease – 18.7% – is expected in the number of transit passengers,” Hauksson explains. “This can, for the most part, be attributed to streamlining by the airlines, with fewer destinations and decreased frequency on certain routes. In addition, the seat availability has an impact on connection options as well as the number of passengers. It will be most interesting to see the development in 2020.”

While Keflavík is currently experiencing a dip in passenger traffic, it is important to place that in the context of the recent rapid growth. Indeed, 2019 still looks likely to be the airport’s second-busiest year ever.

From a route development perspective, there is a lot of interest in further developing the Asian market from Keflavík – China, India and Korea, for example – and this is foreseen to be an important factor in the future.

“Visitors from that part of the world have become a big part of Icelandic tourism in recent years, and the demand for direct flights is growing rapidly,” says Hauksson. “These past few years we have seen continued additions to the selection of destinations, places that had been under-served or even completely unserved in Europe or North America. We have been very well covered in these two continents, which has helped position Keflavík Airport as an important hub for transatlantic travel. With regards to North America, both Icelandic airlines, Icelandair and WOW air, have added to their destinations. In addition, Keflavík Airport continues to serve the big four – Delta Airlines, American Airlines, United Airlines and Air Canada – which means our network is quite good in North America.” 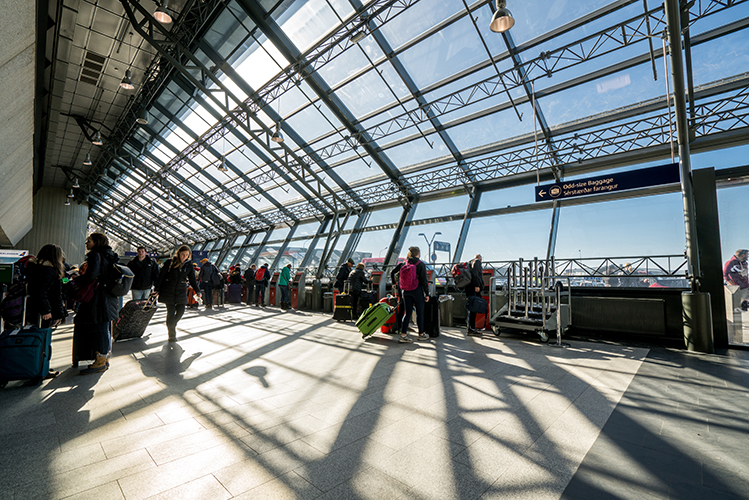 Keflavík Airport has been central to facilitating Iceland’s growing tourist numbers, and has seen rapid growth – doubling from 4.8 million passengers in 2015 to 9.8 million in 2018.

Building on its traffic growth, Keflavík Airport has embarked on a €245 million Major Development Plan. The development outlined for the Leif Eiriksson Air Terminal is divided into two phases, Isavia’s Board of Directors having approved the commencement of project design for the first phase.

“Under a framework agreement, Corgan, a US company, was assigned to design the new facility connecting the two main terminal buildings at Keflavík,” Hauksson explains. “This addition includes a new border control area, increased F&B, and dual gates for Schengen and non-Schengen traffic. The design is ongoing, and construction will start at the beginning of 2020.”

Meanwhile, a tender is being prepared for the Project Management Team to oversee the design and construction for the second phase of the terminal development.

“A pre-market engagement was held in Iceland in January, where several international companies showed interest in the project,” says Hauksson. “The pre-qualification questionnaire will be sent out in March and an invitation to tender in April. A tender for the design of the East Pier and North Building will be issued in 2020, pending feasibility of financing and construction of the East Pier.”

In addition to Keflavík, Isavia also operates the domestic airports on behalf of the government through a service agreement. This includes the smaller international airports at Reykjavik, Akureyri in the north, and Egilsstadir in eastern Iceland. “Improvements to these airports will help marketing these places to foreign airlines that are interested in bringing passengers directly to some of the big tourist attractions,” says Hauksson. 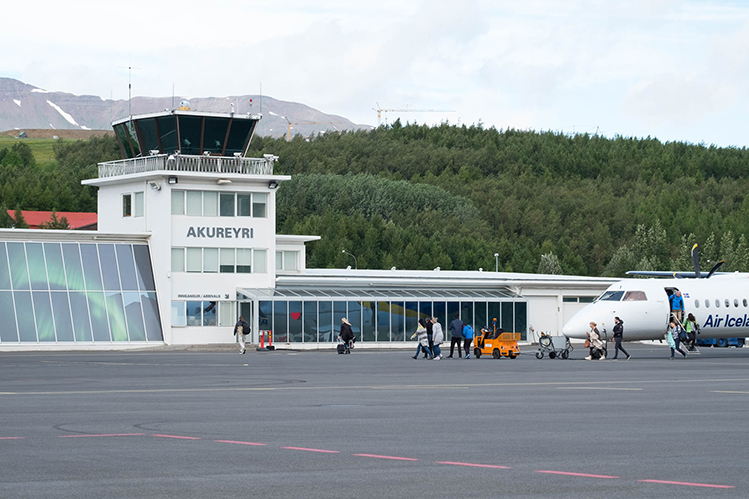 In addition to Keflavík, Isavia also operates the domestic airports on behalf of the government through a service agreement. This includes the smaller international airports at Reykjavik, Akureyri in the north, and Egilsstadir in eastern Iceland.

Commercial results have developed very well in line with passenger traffic. “Peaks have grown, but our staff is able to serve all customers with a high level of efficiency and passenger experience, as Airport Service Quality (ASQ) results show consistently,” Hauksson comments. “In 2017, Keflavík Airport was in 27th place and last year we went up 10 places to number 17.”

With the upcoming enlargement of the airport, Isavia will be tendering current commercial units through the whole terminal, altogether around 9,000sqm in the coming years.

“The general trend in airports around the world has been to increase space for food & beverages, and Keflavík Airport is no different. We do see a large demand for more F&B, especially with increased variety. We have been very happy with our current vendor contracts, but conditions require a new tender to be made periodically.”

Hauksson defines Keflavík’s largest passenger group as “local touch seekers”, so there are naturally plans to continue emphasising the Icelandic ambience through various touchpoints, while also catering for different segments such as transfer passengers and millennials.

“We have been looking at fast service processes and to bring in ambitious vendors with exciting products and services. This will, of course, all be going for tender and the process will take some time. The future is exciting.”

Isavia is further innovating in the commercial & retail environment. Last October, Keflavík Airport, which will welcome 300,000 Chinese travellers a year by 2020, became the first service provider in Iceland to give the option of paying with Alipay through ePassi.

Hauksson emphasises the importance of offering digitally-driven retail sales to this key demographic. “Asia is our biggest growth market. With that in mind, I can give you an interesting example of how the introduction of Alipay has worked for us. On the first day that we offered customers the chance to use Alipay through ePassi to pay for goods and services, one store had one-third of its transactions through Alipay. This was only on the first day and the service had not even been properly advertised or signposted. We have seen an incremental increase in sales where Alipay is in use. We have also had a very positive reaction from Chinese passengers, who are happy with the whole Keflavík Airport experience.”

Following the introduction of the most common method of payment in China, Isavia has started marketing campaigns aimed at this group of tourists. “For example, we had a campaign tailored towards the Chinese New Year celebration in February, which was a massive success,” Hauksson explains. “We aim to provide all our different groups of passengers at Keflavík Airport with a good experience on their travels. The adoption of Alipay at our shops and restaurants has been a big part of this plan, and successful.”

“The best that Iceland has to offer”

Next on the agenda for Isavia is hosting the ACI EUROPE Airport Commercial & Retail Conference & Exhibition on 18-20 March, which will welcome around 400 representatives from airports, travel retail operators, brands, and other business partners.

Hauksson enthuses that delegates will hear how Iceland has adapted after the banking crisis, reinvented itself, and thrived in many ways. They will also learn how Keflavík Airport will change in the coming years and how new groups of tourists will influence the operation.

“Delegates can experience all the best that Iceland has to offer at a time when winter and spring meet and the country is at its most spectacular, where fire and ice meet and offer a beautiful view of nature in its prime.”