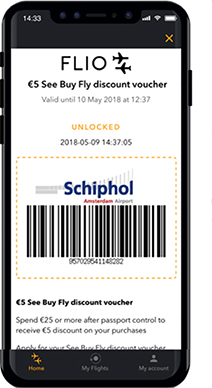 The FLIO app, used by air passengers to destress their time at airports, has now been installed more than one million times.

The FLIO app, used by air passengers to destress their time at airports, has now been installed more than one million times. This makes FLIO, the air traveller’s ‘flight companion’, the most used airport app in the world. Usage of the app increased three and a half times between January and December 2018.

“Passengers value certainty,” comments Stephan Uhrenbacher, FLIO’s founder and CEO. “On top of providing the most comprehensive information about all commercial airports in the world, we have built the best flight information service on any app available today. By drawing from different sources such as aggregators, individual airports and airlines, FLIO offers air travellers the most up-to-date information on flight departure times and gate changes on the market.”

Thanks to growing partnerships with key players in airport services, passengers also receive invaluable guidance and information, as well as special offers for most of the world’s busiest terminals and can access more than 1,500 instantly bookable services ranging from airport trains like Heathrow Express to lounges or fast track, all directly within the app.

The FLIO app is consistently rated above 4.4 in the app stores and was featured as one of the best apps of 2018 by PCMag and Computerworld.

FLIO’s ultimate goal is to make passengers aware of all aspects of their travel. “We strive to give passengers even better information, changing the airport experience from the most stressful part of the journey to an efficient and enjoyable one,” Uhrenbacher adds.