The official opening of İstanbul New Airport is scheduled to take place on 29 October. The first phase of the new mega-hub includes two runways, a terminal, and an annual passenger capacity of 90 million. By Marta Dimitrova 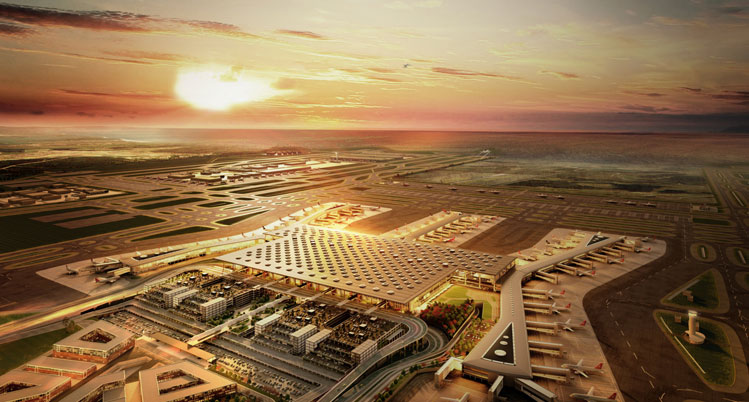 İstanbul New Airport is being constructed in four phases. The first phase will be finalised in 2018 with the opening of two runways and a terminal with a 90 million passenger capacity. When all phases are completed, the new airport will host around 100 airlines flying to more than 350 destinations with an annual passenger capacity up to 200 million.

Technologically-advanced, architecturally-breathtaking, and constructed in just three-and-a-half years, İstanbul New Airport will be the biggest air travel hub in Europe, with an ultimate annual capacity of 200 million passengers.

On 29 October, which marks the 95th anniversary of the Republic of Turkey, what will be the biggest airport in the world built from scratch is due to open with a spectacular ceremony.

Just two days after, Turkey’s flag carrier, Turkish Airlines, will make the first passenger flight from İstanbul New Airport. The first overseas flights will be to the Turkish Republic of Northern Cyprus and Azerbaijan.

Training as part of the ORAT (Operational Readiness and Airport Transfer) process is well underway. The ORAT process at İstanbul New Airport started in 2016, in consultancy with Incheon International Airport Corporation and Copenhagen Airports, aiming to evaluate the general readiness of facilities, systems, procedures, equipment and trained operations personnel. These trials have also allowed the participants, who are the end users of İstanbul New Airport, to simulate their processes under real operational conditions before the launch.

“A transfer to an airport that will reflect Turkey’s strength and potential for growth, and turn a new page in aviation history, will take place,” says H. Kadri Samsunlu, CEO and General Manager, İGA. “We have finished all preparations for the transfer to İstanbul New Airport. We have especially made significant progress in the operational preparation part, which is the first stage of ORAT. We’ll carry out three major trials in the coming month. We are working on scenarios based on 105 different subjects and events.”

The ORAT work-flow, class and field training will be followed by three trial periods:

“The transfer to İstanbul New Airport will be the biggest-ever airport transfer in the world. There have been no airports transferred further than 45km in the world,” Samsunlu comments. “Since 2016, we have been meticulously carrying out our works regarding the transfer to İstanbul New Airport. At this point, we have finished the training of airlines, particularly Turkish Airlines, ground services and other stakeholders, all in order to ensure their orientation to the airport in the operation preparation process.”

Between 25 and 30 October, only a limited number of flights will be conducted at İstanbul New Airport for the purpose of removing materials and equipment from Istanbul Atatürk Airport. The transfer process will start on 30 October at 03:00 and end on 31 October at midnight.

Both airports will offer flights in a limited number during this 45-hour process. As of midnight on 31 October, Istanbul Atatürk Airport will be closed for scheduled and non-scheduled domestic and international commercial passenger transport.

When all phases are complete, the new airport will host around 100 airlines flying to more than 350 destinations, with an annual passenger capacity of up to 200 million.