The Cloud-based infrastructure of the new facilities at Muscat and Salalah airports creates a platform for innovation, enabling more sophisticated passenger management through technologies including the Internet of Things and beacons. Naseer Ahmad Khan, CEO, ieon, shared his thoughts with Ross Falconer ahead of his address in the Digital Innovation & Big Data Conference at this year’s ACI Airport Exchange. 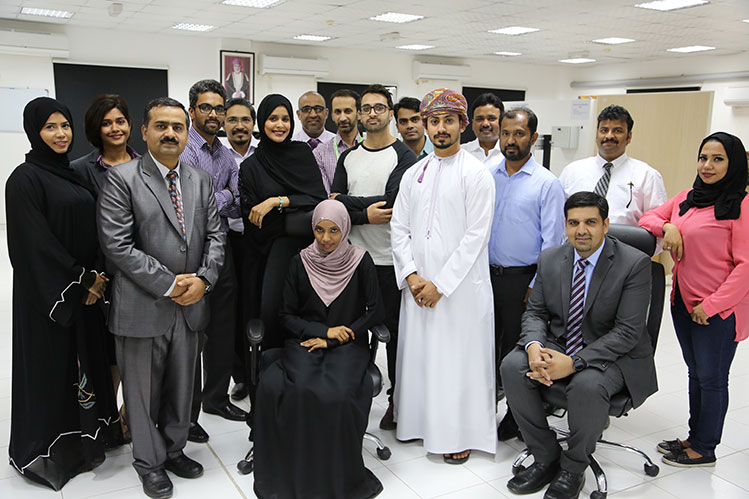 The ieon team at the project staging and testing facility in Muscat.

Muscat and Salalah airports are among the few in the world to be fully virtualised, with all systems hosted in a completely virtual computing environment. It is an approach that has created a foundation for launching next generation services to improve both operational and passenger experience.

ieon and NCR have been working in synergy at both airports, with NCR bringing airport operational expertise and ieon bringing IT design and implementation expertise. Salalah Airport is complete and fully functional, while Muscat Airport is complete and undergoing final takeover. ieon is currently providing 24/7 ‘third line’ IT support to both airports.

Discussing the benefits of the private Cloud-based infrastructure implemented at Muscat and Salalah, Naseer Ahmad Khan, CEO, ieon, explains that it provides a central point of management along with modularised services which, because they are standardised, are easier to manage. “This brings a huge amount of resilience and stability, and actually creates a system that is quite difficult to break,” he says. “It creates a platform for innovation and you can deploy Internet of Things-based technology, such as beacon technology, to enable a more sophisticated passenger management application. You can innovate a huge amount because you have a great foundation where you can generate and create, and put new services to production faster than ever before.”

Indeed, beacons can be used to guide passengers through each touchpoint – check-in, immigration, boarding, etc – using one cohesive platform without a complex integration of interfaces.

“When you launch a new service or new product that is going to be used by either operational staff or customers, on physical infrastructure, it has to transverse multiple layers of technology,” Khan explains. “That is called ‘New Service Creation’. Creating new services on a harmonised virtual platform makes it safer and quicker to do. As the Internet of Things and beacon technology matures, this is an environment that those services and products can be launched within much more efficiently and with a higher success rate than physical environments.” 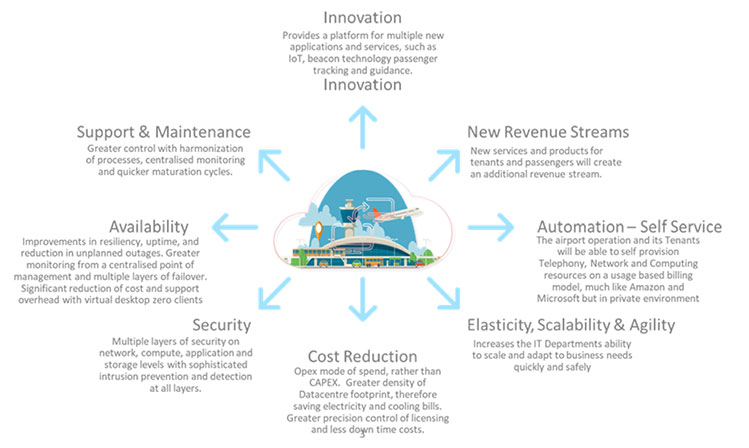 The benefits of the private Cloud-based infrastructure of the new facilities at Muscat and Salalah airports.

Blockchain is another technology that has been heralded as transformational for many industries, and has the potential to streamline the entire passenger journey. A smart ticket, for example, would contain the traveller’s passport and their identity for biometric use, enabling them to walk through border control without having to see anyone. Only if that fails would they have to present their physical passport for validation.

“All the terms and conditions would be contained in your smart ticket, so it would allow you to operate within those set parameters, such as which class you want to fly, and if something goes wrong – such as a delay or cancellation – the ticket can automatically refund you,” says Khan. “For the passenger, it would provide a more efficient buying mechanism and a more seamless journey from purchase to arrival at destination.”

Based on the same model of full virtualisation and private cloud hosting at Muscat and Salalah, ieon has developed a five-year strategy for several airports in the Middle East “in which they would build a revenue generating IT infrastructure in year one, year two would break even, and by year three it would be generating profit.”

“By looking at what we have built at Muscat and Salalah, other airports can observe and learn the benefits of implementing a virtualised environment. Additionally, they can learn the benefits of leaner programme organisation, and how to implement a future-proofed, financially-efficient methodology,” Khan concludes.