Cork maintaining ‘unbeatable connectivity’ to and from South of Ireland

The ACI EUROPE Best Airport Award in the category for airports with ‘Under 5 million passengers’ went to Cork Airport, with the judges recognising the improvement of airport facilities and use of innovative technology, as well as the airport’s achievement in securing its first low-cost transatlantic service. Niall MacCarthy, Managing Director, Cork Airport, spoke to Marta Dimitrova.

The past year has, indeed, been an eventful one for Cork Airport, with achievement of the airport’s long-held ambition to establish direct links to the US through a new route to Boston, as well as the launch of its largest capital investment since 2006.

The airport’s efforts to improve the overall passenger experience and attract new routes were highly praised by the judges at this year’s ACI EUROPE Best Airport Awards.

“First of all, the Cork Airport community was delighted to win this year’s ACI EUROPE Best Airport Award in the ‘Under 5 million passengers’ category,” says Niall MacCarthy, Managing Director, Cork Airport. “The entire team at Cork Airport works extremely hard to ensure we maintain outstanding levels of customer service and make ambitious strides in passenger and travel innovation. As the only Irish airport to win this year, it is superb to have the title and see the ongoing efforts of Cork Airport endorsed as the best in European aviation and travel.”

A capital investment programme of €4 million is being used to enhance and develop key services and facilities across the airport. It has invested in upgrades to the food & beverage outlets, additional passenger security screening channels, and online pre-booking of airport car parking.

To constantly enhance the customer experience, the airport’s management team looks at services from a traveller’s perspective. For instance, the airport has analysed concerns that the passenger might experience, such as queueing, and has, therefore, invested in technology that utilises mobile and real-time information to proactively foresee and effectively prepare for growing passenger traffic.

Last year, passenger numbers at Cork Airport grew by 8% to 2.23 million and the airport is continuing this momentum into 2017. “The overriding factors accounting for this growth are the new routes with new airlines complementing the increased frequencies that have also enabled considerable and persistent growth,” MacCarthy explains.

This year has seen Cork Airport secure five new routes across Europe and the US, as well as an increase in capacity on key routes. July 2017, in particular, was an incredibly special and monumental month. With Norwegian taking off to Boston on the airport’s first transatlantic service in its history on 1 July, Cork Airport also enjoyed its busiest day of operations since 2013. 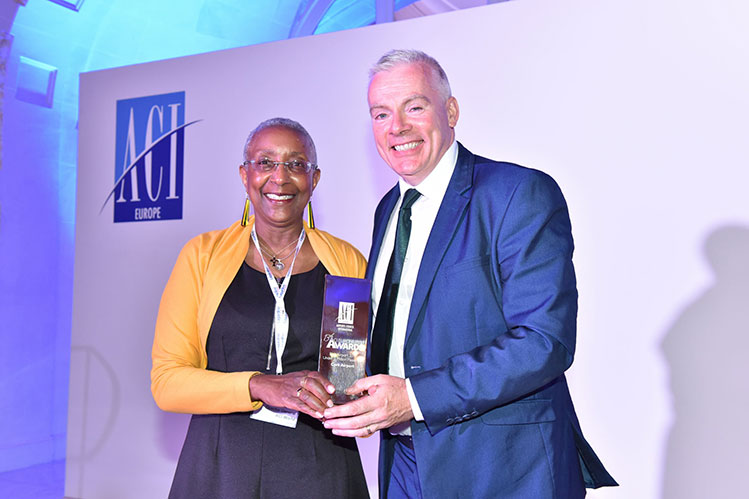 ‘Coalition of the Willing’ initiative
Cork Airport’s route development strategy is one that works on providing compelling and tangible reasons for airline partners to seriously look at Cork Airport and the potential for growth in the South of Ireland.

“We want to continue to grow our choice of destinations to ensure we offer unbeatable connectivity to and from the South of Ireland,” says MacCarthy.

The airport’s innovative approach to attracting airline services through the ‘Coalition of the Willing’ initiative, also impressed the ACI EUROPE Best Airport Awards judges. The Coalition of the Willing comprises members with a common goal of developing and executing Cork Airport’s ambitious growth strategy.

Cork Airport is undergoing a €4 million capital investment programme with the biggest changes being in the food & beverage outlets in the departures lounge. In May, the airport opened the new food court, Food Republic, offering the best of Ireland’s seafood and produce.

“From an airline perspective, the innovative approach of the Coalition of the Willing has ensured Cork Airport can act as a single point of contact that can leverage the full support of the region we serve,” MacCarthy comments. “This gives our airline customers the reassurance that all parties are working in a concerted way to ensure that prospective routes will not only be sustainable, but also profitable. Ultimately, the innovation in the Coalition of the Willing lies in the fact that when we engage with airlines, Cork Airport not only pitches for routes, we also provide confidence and reassurance that the route already has a steady and strong marketing and promotional plan in place. Our airline partners, therefore, know that when they come to Cork Airport, they will be supported 100% by the region.”

Looking ahead, the airport’s main ambition is to sustain the forecast growth, which this year is expected to be 4%, or another 110,000 passengers. “We also want to remain Ireland’s best-connected airport outside of Dublin. Collectively and collaboratively, we will endeavour to maintain Cork’s position as the gateway to the South of Ireland and thriving hub for trade, technology, innovation and tourism,” MacCarthy concludes.