So you think you can run an airport?

Imagine a game that puts you in the seat of an airport operator. Got it? Now add to it 28.5 million passengers flying through this airport on a yearly basis. It is Russia’s second-busiest airport, Moscow-Domodedovo, that launched a game enabling you to get a feel for what it’s like to facilitate 225,000 aircraft movements a year. Agata Lyznik gets her game on.

The game – now in its second edition – was developed by Moscow-Domodedovo and is structured as a series of challenges of growing intensity and difficulty. No level can be skipped, so only success can unlock the next challenge! Titles such as ‘Jingle bells’, ‘Hot summer’, and ‘Polar night’ evoke the situations encountered by the player, that keep even the most seasoned airport operators up at night in real life. An additional touch is the simulation of the – at times extreme – Russian weather conditions. In snow and in mist, the airport operator – you, this time – needs to keep the business running.

DME Live version 2.0 was released in March 2017 in AppStore and Google Play. Since then, both versions of DME Live simulators have been downloaded more than 1 million times.

Each arriving plane needs a parking spot and a series of services: getting passengers out and back in, unloading and reloading luggage, refuelling and refilling the catering supply. Efficient ground handling makes money (curiously, the currency is Domodedovo €), with which you can pay for time-saving upgrades, e.g. advanced fuel service or electronic check-in. Small planes are quite easy to discern from the other lot, whereas medium and large aircraft often create confusion, especially if you are playing the game on a smartphone. Bigger tablet screens solve this issue, but bring about another: they might slow you down. To each, his/her own preferred device!

DME Live has quite an unusual origin. It was actually conceived as a part of Domodedovo’s innovative Human Resources strategy of engaging young talents. A special team was set up to create both online and offline gaming simulators to train future employees of the company in how to run an airport. This edutainment approach proved very popular and Domodedovo’s bright minds quickly realised the game’s potential to appeal to a broader audience.

The first version was released in 2011 and was enthusiastically received. However, with the technologies and processes in aviation changing significantly over the years, a need for a new version arose. DME Live version 2.0 was released in March 2017 in AppStore and Google Play. Since then, both versions of DME Live simulators have been downloaded more than 1 million times. 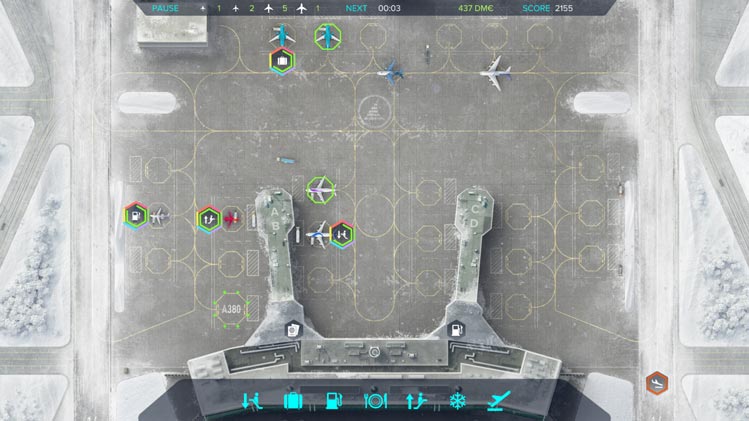 Aleksandr Vlasov, Press Secretary of Domodedovo Airport, comments: “Our goal was to make a user feel like he is the General Manager of Domodedovo Airport, the one who is responsible not only for business results but for services as well. In order to achieve close affinity to the reality, we introduced such features as the exact copy of the Moscow-Domodedovo Airport with two runways and a full range of ground support equipment (jetways, buses, ambulifts, deicers, boarding ramps, refuellers, etc.), narrow-body and wide-body types of aircraft with appropriate ground handling for all of them, changing weather conditions and time of the day/night.”

The game is safe for children, but cannot be played in multi-player mode. It’s a good test of dexterity and strategic thinking, a must-have for any aviation geek and most importantly – it’s fun to play!