Last year was the first in airBaltic’s five-year Horizon 2021 business plan, put in place after the airline completed its turnaround programme and returned to profitability in 2013. Indeed, airBaltic today is in its strongest-ever position. 2016 saw 10% growth to 2.9 million passengers, and already 13 new routes have been announced for the 2017 summer season.

Martin Gauss joined airBaltic as CEO in November 2011. He has over 25 years’ experience in the airline industry, and his leadership has driven airBaltic’s turnaround. “Our plan is robust and sets out a clear growth path for airBaltic,” he says. “We have a very focused management team to execute it, hence the success last year, and we expect more ambitious growth this year.”

The airline is a vital piece of transport infrastructure for the Baltic region. With its main base at Riga, and additional bases at Tallinn and Vilnius, it provides connectivity for the six million Baltic citizens to key business and leisure markets. To paint the full picture, there are few travel alternatives – no rail or motorway connections to Europe, and limited opportunities by sea – so air connectivity is essential.

“Our Horizon 2021 business plan sets out a concept that the entire world should be accessible with one stop,” Gauss explains. “Abu Dhabi and Madrid, in particular, are vital hubs to connect to South East Asia and South America. Etihad Airways and Iberia are home carriers at these airports and belong to our family of valuable codeshare partners. This cooperation further strengthens our service and enables our travellers to reach key airports with just one stop.” 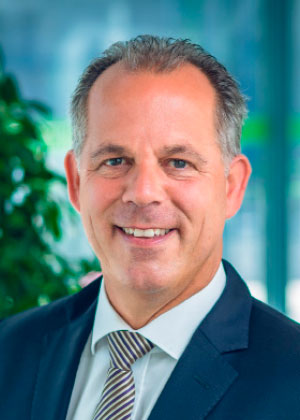 Martin Gauss, CEO airBaltic: “Our Horizon 2021 business plan sets out a concept that the entire world should be accessible with one stop. Abu Dhabi and Madrid, in particular, are vital hubs to connect to South East Asia and South America. Etihad Airways and Iberia are home carriers at these airports and belong to our family of valuable codeshare partners.”

Significantly, in terms of its network expansion, airBaltic is the launch customer for the new Bombardier CS300. It has 20 on order, with two already delivered, and the first commercial flight last December was a service from Riga to Amsterdam. airBaltic is operating the CS300 in a 145-seat, two-class configuration on routes including Barcelona, Frankfurt, Helsinki, Munich, Rome and Tallinn.

As part of the airline’s fleet modernisation strategy, the CS300s will replace its 11 Boeing 737s. It plans to have eight in service by peak summer season this year, then take delivery of six more in 2018, and the final six in 2019. “Our 13 new routes are a direct result of having this state-of-the-art jet,” Gauss comments. “The economics enable us to open longer, thinner routes, and do so at a lower cost. It flies higher and faster, and burns less fuel, so everything changes. The addition of new and larger planes also means that we can offer 15% more tickets this year, as the number of available seats increases, additional flights to European airports are introduced, and high-demand cities like Copenhagen get an upgrade from turboprop to jet aircraft.

Meanwhile, replacement of the Bombardier Q400 fleet will take place in five-and-a-half to six years, when they are returned to the lessor. “Over the period of a year, all 12 Q400s need to be replaced, so we can either extend or get a new lease,” Gauss explains. “We will have to decide which aircraft will sit below the CS300, because it’s a big jump from 76 to 145 seats. I can see us replacing the 76-seaters with 100-seaters six years from now and, therefore, the CS100 is the logical decision, but this depends on us fulfilling the business plan and our new shareholder, which will most likely be a bigger airline.”

The Horizon 2021 business plan will deliver a new type of travel experience for airBaltic’s customers over the next five years, as the airline continues to grow and delivers more connectivity to Latvia, Estonia and Lithuania. While its main base at Riga has 60+ routes, the Tallinn and Vilnius bases will have more than 10 direct flights each within the next five years as part of the Horizon 2021 plan, in combination with transfers via Riga. “This way we offer unmatched service into and out of the Baltics, and this reinforces our position in this market. We will continue our success story of growing profitably, and we will make every effort to find a new strategic partner who is a good fit and interested in maintaining airBaltic’s role as a key infrastructure element for the Baltic region,” Gauss concludes. 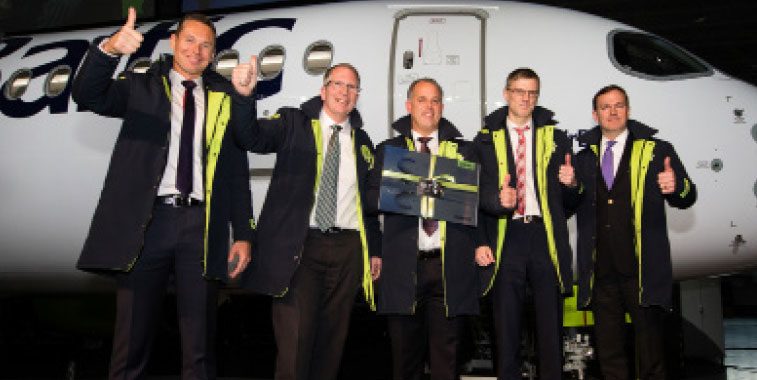 Launch operator airBaltic took delivery of its first Bombardier CS300 in November 2016. “With its longer range capabilities, lower fuel burn and reduced noise emissions compared to other airliners in its segment, the CS300 will enable airBaltic to open new routes and connect people all across Europe, while offering passengers an unparalleled inflight experience,” explains Martin Gauss, CEO airBaltic.