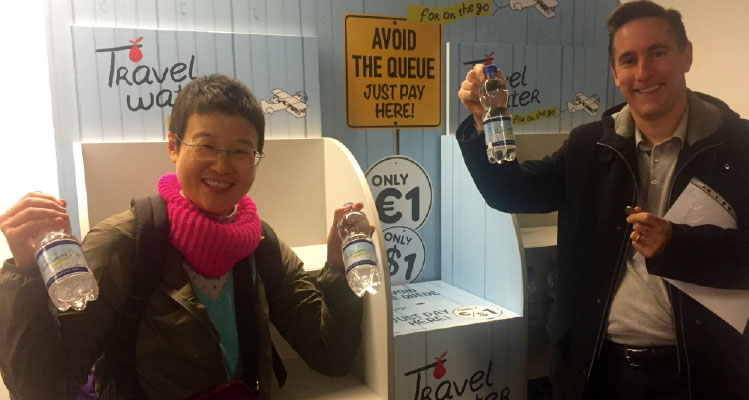 Since the arrival of the security rules on liquids, aerosols and gels in summer 2006, passengers have to surrender bottles of water at airside security checkpoints. As part of a series of efforts to reduce the inconvenience of this rule, airports have sought new ways to address the problem by making water cheaper or more easily available. ACI EUROPE took note and issued a Recommended Practice last year and since then a good idea has spread further and further. Robert O’Meara reports.

You don’t have to be on social media to have heard air passengers balk at the price of water when travelling. A recent consumer group survey that received significant media coverage compared the pricing of water on various different low cost carriers – it found the price was surprisingly high on some. For example, Ryanair which carried over 100 million passengers last year, charges €3 for a bottle of water.

Airports have been listening to their customers and over the past couple of years, we have seen a number of initiatives gather momentum, granting passengers access to cheaper water and/or free water fountains in the airside area of an airport.

Dublin Airport was one of the early innovators – bolstered by the fact that the daa group which runs the airport is also a retailer. It has had bottled water available for €1 since 2012 and in 2014 introduced unmanned €1 water paystations after security and beyond on the airside. The bottles are not in vending machines, they are freely available, with a little coin box beside them. This “honesty station” approach was an instant success – even garnering some media coverage – and 92% of passengers do pay the €1. DAA quickly implemented the concept at Cork Airport too.

The good idea appears to have spread, further boosted by an ACI EUROPE Recommended Practice (RP) on access to water after airport security checkpoints, adopted by the Board of ACI EUROPE in June 2015. The RP states that after airside security checkpoints, airports should make water available in 500ml bottles at a maximum price of €1 or invest in better availability of water fountains. Since then, it has gone on to become a fully-fledged phenomenon. By December 2015, 60% of Europe’s airports were aligned with the practice and those airports welcome 78% of Europe’s air passengers through their doors.

The recently rebranded Paris Aéroport chose to invest more in water fountain availability. Jean-Michel Hua, Customer Satisfaction Director, Paris Aéroport explains “Paris Aéroport decided to pursue the installation of modern fountains. In total, 80 fountains will be available across our different terminals as of summer 2016. We decided to focus first on airside (after security check points). We will further deploy 70 additional fountains in various locations such as connexion passengers paths and public areas.”

Athens International Airport has gone one step further, making a 500ml bottle of water available for just 35 cents, mindful of the shadow expensive water can cast on the passenger experience. “In several cases in the past, water bottles were bought by the passengers more expensive before the security screening and then taken away from them at the screening due to LAGs check. Right after, the same passengers and especially families with children had to buy again bottles of water, very expensive. At least now, water is available at a very decent price and this is not a serious issue anymore… I believe it is only fair that passengers pay a reasonable price for an important commodity like water” says George Zervoudis, Manager Terminal Services, Athens International Airport.

And consider the case of Vilnius Airport where they believe the low pricing of water has actually benefited customer perception of value available at the airport. As Artūras Stankevičius, the Manager of Vilnius Airport states “We started to sell the bottles of water for €1 last September. As we can see now, customers are really happy with this. It stands more for the natural needs for our customers and in some areas it also can generate some extra non-aviation revenues.”

Most tellingly however, one of the biggest fans of the initiative is EU Transport Commissioner Violeta Bulc. Upon the launch of the ACI EUROPE Recommended Practice, she commented “I fully support ACI EUROPE’s proactive approach towards improving the passenger – and consumer – experience across the European airport network. This initiative allowing air passengers easier, cheaper access to water is the right move. I congratulate the airports who have already led the way and urge others to implement this recommended practice as soon as they can.”

Since then, Commissioner Bulc has repeatedly praised the airport industry for its proactive work on this, tweeting about it while passing through airports, mentioning it in speeches and even speaking about it in very positive tones during the press conference at the launch of the EU Aviation Strategy last December.

ACI EUROPE is now engaged in conducting a renewed survey of the initiative to gauge how many more airports have implemented this practice, since last December. But next time you’re passing through security at an airport – take a look around you afterwards – you may well be pleasantly surprised.