Airports consider the cause and effect equation

As the negotiations for a global market-based measure for airline emissions intensify, with all to play for at ICAO in September, we take stock of where airports are in relation to climate change. Seven years on from the launch of the Airport Carbon Accreditation programme, initially in Europe, we look at how far things have come and consider what is in store for the future. Report by Inês Rebelo.

Climate change has been a political issue for quite some time now, albeit one whose profile was perhaps buffeted by major events like the economic and financial crisis – but as we have seen in the last year, it is firmly back in the spotlight now (Leonardo di Caprio even name-checked it in his Oscar speech earlier this year). In the political sphere, one of the latest major moments at global scale was the 21st Session of the Conference of the Parties to the United Nations Framework Convention on Climate Change (COP21/CMP11), which took place on the site of Paris-Le Bourget Airport in November-December last year. It was a historic international moment for climate politics and emissions governance because, for the first time, 195 nations succeeded in forging consensus on adopting a universal climate agreement that limits temperature increase to below 2°C above pre-industrial levels. 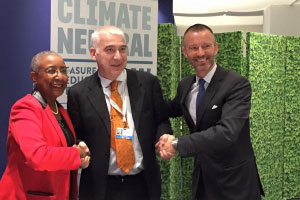 In parallel, global environmental discussions have been dominated by ICAO’s goal to forge a deal on capping net airline emissions. ICAO is due to take a decision on a global market-based measure to curb net airline CO2 emissions from international flights above 2020 levels in autumn through an offsetting mechanism.

These are just two examples that illustrate how climate change has been a core topic in talks at international level. Zoom in on the airport industry and climate change is a recognised challenge and a key priority. With so much vital infrastructure on the ground, the industry is pursuing a two-pronged approach. On the one hand, it aims to reduce its impact on the environment, by lowering its carbon emissions. On the other hand, it intends to reinforce its resilience to the impact of climate change on airport infrastructure. With this in mind, we are now living in an era in which airports are earnestly investing in becoming more sustainable and climate resilient.

At COP21, as part of this two-pronged approach, airports have proven how they are placing environment at the centre of their strategy under Airport Carbon Accreditation – the global carbon management standard for the airport industry. In December 2015, ACI EUROPE announced a new Resolution committing itself to increasing the number of carbon neutral airports in Europe to 50 by 2030 (there are currently 22 carbon neutral airports, representing 13.7% of the air passenger traffic in Europe). Furthermore, a Memorandum of Understanding between UNFCCC, ACI EUROPE and ACI WORLD was signed to jointly cooperate in promoting Airport Carbon Accreditation as well as associated climate actions by airports on one hand, and the UNFCCC “Climate Neutral Now” campaign on the other. The agreement aims to increase the number of airports progressing to Level 3 (Optimisation) and Level 3+ (Neutrality) of the programme. On this occasion, John Kilani, Director, Sustainable Development Mechanisms programme, UNFCCC Secretariat enthused: “It is immensely encouraging to see an industry as visible and strategically relevant as the airport industry being so proactive on climate action. What ACI has achieved through Airport Carbon Accreditation over the past 6 years is inspiring – to mobilise 137 airports in the journey towards carbon neutrality is an example that many other industries could learn from.”

The essence of Airport Carbon Accreditation is helping airports progress in delivering on their commitment to reducing and ultimately neutralising their carbon emissions by independently assessing and recognising their endeavours to measure and address their carbon footprint through 4 different levels of certification covering all stages of carbon management: ‘Mapping’, ‘Reduction’, ‘Optimisation’ & ‘Neutrality’. The programme is independently operated by WSP | Parsons Brinckerhoff, an international environmental consultancy appointed by ACI EUROPE to enforce the accreditation criteria for airports on an annual basis. Airports applying to become accredited must have their carbon footprints independently verified in accordance with ISO14064 (Greenhouse Gas Accounting).

The environmental responsibility of the airport industry is being translated into concrete actions. For instance, in 2015 Budapest Airport launched a programme called Greenairport for airport partner organisations that aims to encourage companies operating at the airport to work with the operator on further reducing the environmental impacts of the airport. These efforts include reducing energy consumption and promoting the use of renewable energy sources and of electric vehicles. 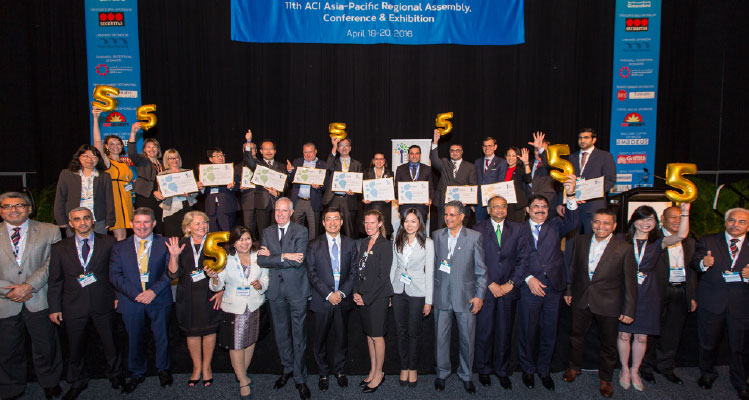 Hong Kong International Airport, one of the world’s busiest airports that was the very first in the region to achieve a three-yearly renewal at Level 3 Optimisation in January 2016, is also pursuing a stakeholder engagement approach: it is engaging 46 companies on the airport site to reduce carbon emissions. Mike Kilburn, Acting General Manager, Sustainability Airport Authority Hong Kong (AAHK) explains this environmental strategy: “The key to the Carbon Reduction Programme is the active participation of 46 airport business partners (ABPs) who together with AAHK pledged to reduce emission intensity by 25% between 2010 and 2015 from a 2008 baseline. As the emissions of the ABPs account for some 60% of airport emissions, the scale of reduction is substantially larger than if AAHK were to be the only one reducing its emissions. The pledge is facilitated by AAHK’s online Carbon Audit System, which makes it easy for ABPs to submit their data and monitor their own performance, and for AAHK to report collectively for the whole airport community.”

Greater Moncton International Airport in Canada, which became accredited at Level 1 Mapping in May, is also taking steps to become greener by updating taxiway and apron edge lighting to more energy and maintenance efficient LED lighting, as well as investing in a more energy efficient operations facility to house its operational, maintenance, and emergency response personnel.

Since its launch in 2009, Airport Carbon Accreditation has gone from strength to strength, eventually becoming available to airports across the world, when it took off in Latin America & Caribbean in November 2014 with the accreditation of Puerto Vallarta International Airport at Level 1 Mapping, which successfully upgraded to Level 2 Reduction in the meantime. The programme has already certified 4 airports in this region.

In Europe, Airport Carbon Accredited status has been earned by 107 airports to date, including the latest accreditations of Vilnius Airport, Menorca Airport, Keflavik International Airport, Sofia Airport, La Rochelle Airport, and Riga International Airport, as well as all 10 French airports and 3 Cambodian airports in the VINCI Group – all certified at Level 1 Mapping. This shows how the programme is evolving fast in the region due to European airports’ active engagement in addressing their carbon emissions to become carbon neutral. The upgrade of Izmir Adnan Menderes Airport to Level 3+ Neutrality, making it the 21st carbon neutral airport, speaks for itself.

In Asia-Pacific, 29 airports are currently accredited, accounting for more than 24% of air passenger traffic in the region. This year, the programme is celebrating its 5th anniversary since its extension to Asia-Pacific in November 2011 with the pioneering accreditation of Abu Dhabi International Airport. Patti Chau, Regional Director of ACI Asia-Pacific, throws down the gauntlet: “I encourage more members to join the 156 airports worldwide to become Airport Carbon Accredited and demonstrate our airports’ dedication to sustainable growth.”

The number of accredited airports also keeps rising in North America. In less than 2 years, 13 airports have already been certified in the continent, including Dallas Fort Worth International and San Francisco International (both recently certified at Level 3 Optimisation).

In Africa, in the past year, two new airports have come on board: Libreville Leon Mba International and Félix Houphouet Boigny Abidjan International Airport have joined Enfidha-Hammamet International Airport in Tunisia in setting the example for the airport community in Africa. As Ali Tounsi, Regional Director ACI Africa, commented “The pioneering African airports in the programme so far are demonstrating to others in Africa and the wider world that carbon management is a valid consideration for every business no matter where they are located.”

Today, 156 airports are certified at one of the 4 available levels: 107 airports are accredited in Europe; 29 in Asia-Pacific; 13 in North America; 4 in Latin America and 3 in Africa.

The flip side being implemented by an increasing number of airports entails the way they are coping with environmental risks. This is far from unimportant as the aviation industry regularly faces disruptive weather, which is likely to become more frequent and extreme due to the growing impact of climate change. A greater airports’ preparedness is key to better mitigate climate risks. As such, airports decided to assess their level of vulnerability to potential climate change. They were particularly motivated to do so following the publication of EUROCONTROL’s Challenges of Growth: Climate Change Risk & Resilience – a report detailing the potential impacts of a changing climate on the European aviation sector. ACI EUROPE cooperated with EUROCONTROL, Aena, AVINOR, DGAC/STAC, Heathrow Airport, NATS, Manchester Metropolitan University and IATA to produce a collaborative factsheet “Adapting Aviation to a Changing Climate” in November 2014. This factsheet explains some of the climate change risks for aviation and their potential impact on the provision of aviation services for aircraft operations, airport operators, ANSPs, passengers and staff. It also provides a checklist of questions and case studies to help organisations initiate their climate risk assessments.

In parallel, ACI EUROPE and EUROCONTROL also launched the Collaborative Environmental Management (CEM) Specification in November 2014, following EUROCONTROL’s CEM Specification publication in September 2014. ACI EUROPE endorsed it as one of its Recommended Practices for the management of noise, local air quality and greenhouse gas emissions, making it an industry standard.

It is undeniable that the airport industry is keeping its environmental promise – it is tenaciously reducing its impact on the climate at the same time it is counteracting climate impacts. ACI will continue to report on the industry’s progress each year, through Airport Carbon Accreditation, with headline reduction figures due to be announced at this year’s ACI World Annual General Assembly in Montreal in September.

This year, as Amsterdam Airport Schiphol – the busiest carbon neutral airport in the world – marks 100 years, it is also hosting a special event called the Airports Going Green Conference from 31 October to 2 November. Visit airportsgoinggreen.org