By the end of this year, it is likely that airports with at least some private shareholders will be in the majority in the EU. To pick just one example, in the past month, the privatisation of Lyon-Saint Exupéry has kicked off.

Over the past 6 years, the airport ownership landscape in Europe has evolved quite significantly. In order to take stock of these changes, ACI EUROPE has produced an all-new 2016 edition of The Ownership of Europe’s Airports report, following the very first edition in 2010. So, who owns Europe’s airports now? Inês Rebelo reports.

As the only report of its kind, The Ownership of Europe’s Airports provides comprehensive data on the ownership structure of the 500+ airports in the membership of ACI EUROPE, which collectively handle over 90% of commercial air traffic in Europe each year. Released at the 8th ACI Airport Economics & Finance Conference in London in March, printed copies were snapped up very quickly, by the assembled economists, investors and financiers. The report’s analysis of the nature of public, private and mixed airport ownership in Europe, compared to 2010, was one reason, while its detailed breakdown of the names and percentage holdings of individual shareholders of airport operators by country was another.

Private involvement in Europe’s airports has nearly doubled since 2010 – driven by a mix of deliberate policy choices, State budgetary constraints, and the need to promote air connectivity by investing sufficiently in the development of airport infrastructure. Alongside the significant increase in private participation in Europe’s airports, there is a second clear trend identified: private participation is more focused on the larger airports. This reflects the fact that larger airports are more suitable for private investment, whereas smaller airports tend to be subject to a more limited range of private operation models due to their susceptibility to be structurally unprofitable.

In numbers, what exactly are the big changes in the nature of the ownership of Europe’s airports? Well, for starters, 41% of European airports – 205 airports – now have private shareholders, up from only 22% in 2010. Close to 39% of these airports (79 airports) have full private ownership, while 61% (126 airports) are ‘public-private partnerships’ involving a combination of private and public shareholders.

These key findings are evidence of a profound transformation in the airport business model in Europe in recent years, as Olivier Jankovec, Director General ACI EUROPE, states: “In just 6 years, private investors have gotten involved in an additional circa 100 airports in Europe. This means that the number of European airports with private shareholders has more than doubled – and that 3 in 4 passengers are now travelling through an airport with private shareholders. Meanwhile, almost all fully publicly-owned airports are now corporatised and managed on a purely commercial basis. These are not anecdotal changes to our industry – they are truly transformative changes. They underline the fact that airports are now run as businesses focused on air connectivity development, operational efficiency, service quality, revenue diversification and sustainable investments.”

Another key finding in the report is that private involvement in the operation of European airports is stronger in the EU-countries than in the non-EU bloc. AENA, ANA – Aeroportos de Portugal, Manchester Airports Group, SEA – Milan airports, Zagreb, Ljubljana and Toulouse airports are illustrative examples of the recent shift from public to more private involvement.

The number of privatisations in the pipeline is another indicator of the rapid, ongoing changes in the industry. By the end of this year, it is likely that airports with at least some private shareholders will be in the majority in the EU. To pick just one example, in the past month, the privatisations of Lyon-Saint Exupéry and Nice-Cote d’Azur airports has kicked off. The French State wants to sell 60% of its stake in both airports and there is considerable interest from a variety of parties. The new owners of these airports are expected to be announced this summer. 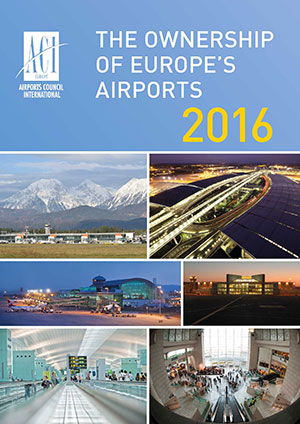 ACI EUROPE has produced an all-new 2016 edition of The Ownership of Europe’s Airports report. It provides comprehensive data on the ownership structure of the 500+ airports in the membership of ACI EUROPE, which collectively handle over 90% of commercial air traffic in Europe each year.

All of this activity reflects well on the airport business and has a positive impact on the airport industry. as Donagh Cagney, Economics Manager ACI EUROPE, comments “The rapid changes in airport ownership since the last Ownership Report. and the con­tinued rise in private involvement in particular. indicate that investment in European airports is generally working. Unlike other transport modes. the airport industry is largely self-supporting – and this is particularly the case for the larger airports,” but he warns that “this does not mean that public authorities do not have a responsibility here – it is essential that the right policy framework is in place. if necessary investment in Europe’s airport infrastructure is to continue.”

For VINCI Airports. the privatisation model brings many advantages. Nicolas Notebaert. Chairman of VINCI Airports. puts it clearly: “Private airport conces­sions are more and more common as they are a way to reduce debt. gain investment or access to excellence in terms of airport infrastructure and ser­vices. It is a model that creates value as long as there is a genuine partnership of trust in which both parties share the same long-term development vision.”

The Ownership of Europe’s Airports 2016 is available in printed version from ACI EUROPE and also in electronic format from this link https://www.aci­europe.org/component/downloads/ downloads/ 4538.html.