“My vision is for DHMI to operate globally”

Serdar Yildirim assumed his role as Director General & Chairman of the Board of DHMI in March of this year and straight away he went on the record: “I’m an idealist.” Paul Hogan recently went to his office at Istanbul Atatürk Airport to find out what he meant by this. The answer was a surprise…

Yildirim: “I’m optimistic Turkey’s brand name is going up, and our increasing traffic proves this assertion. We had some disadvantages in the past, in the 20th Century, but now we have self-confidence. The logic behind Istanbul New Airport is because the centre of gravity in aviation has shifted south and east.”

There are a lot of things I would like to do – DHMI is a sleeping giant. We have got great expertise, the giant should be awakened. It’s time we took our potential outside of the borders of Turkey. My vision is for DHMI to operate globally.”

This might seem like a surprising aspiration for the boss of Turkey’s publicly owned airport network. After all, his airports have much to do at home to cope with persistent growth. But Yildirim believes that this success has great relevance for its potential partnership with airports elsewhere in the world.

Turkish airport traffic in the period to end-August was up 9% again, suggesting it will handle over 180 million passengers by end-2015. By comparison the French airports handled 149 million in 2014 and only the UK (241 million) and Germany (208 million) were bigger markets last year. 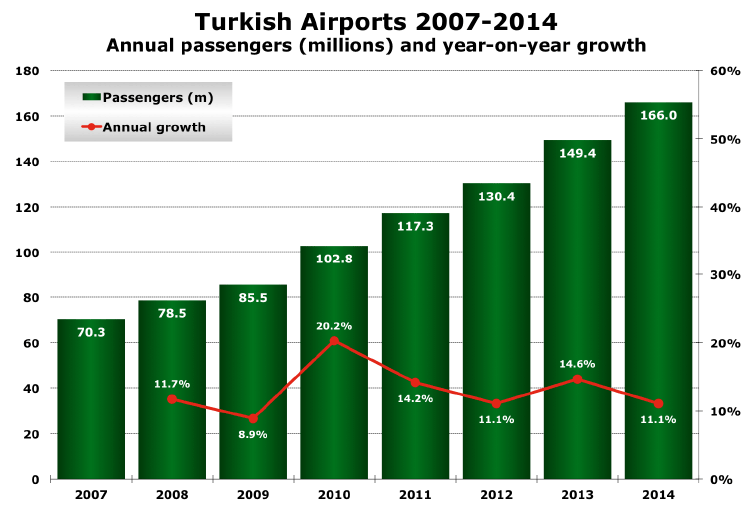 Having already passed Amsterdam Schiphol in the last year, Istanbul Atatürk’s traffic is also up 9% this year. Indeed, it will most likely pass 62 million in 2015, possibly pushing Frankfurt out of third place in Europe – Frankfurt may just stay ahead with a projected 62.3 million passengers, but it is going to be a wafer-thin, and probably unsustainable, lead.

The top positions of London Heathrow and Paris-CDG are not secure either: One of the largest airports in the world is being built in Istanbul, which will join the new breed of world-dominating mega-hubs, along with Beijing’s Daxing and Dubai World Central Al Maktoum Airport (DWC), new hubs which have emerged from new economies to challenge 60 years of pre-eminence by the big hubs of the US and Northern Europe.

So why should DHMI make a move into the international arena, and where does Yildirim see this international expansion taking place? “It’s about a real opportunity that DHMI and the Turkish airports industry have to take to export and globalise – it’s precisely a logical progression from the strong growth of Turkish airports and of Turkey as an important economic power, and not something niche or separate.” 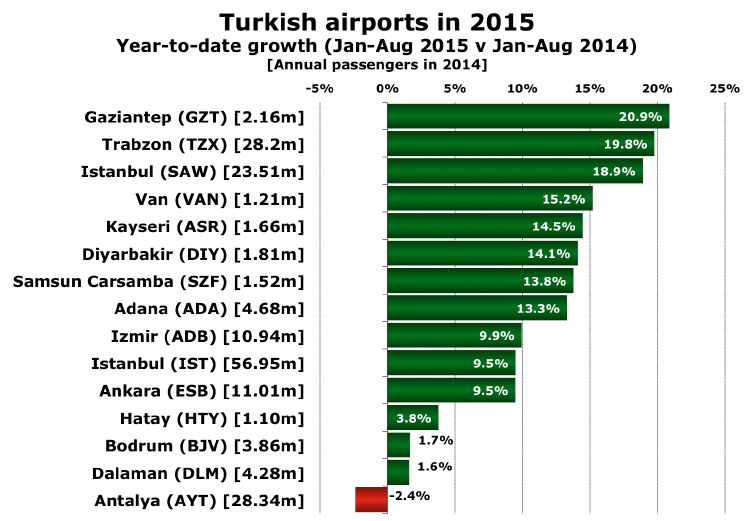 “The first target is Africa”

Yildirim has a long list of potential markets where DHMI could ultimately lead Turkish investment and airport export expertise, including the Middle East, Latin America, Russia, and Asia: “There is huge potential for DHMI in these markets.” But Yildirim’s initial focus is unexpected: “The first target is Africa, there are huge opportunities there… our scope is on Africa, and African attitudes to the presence of DHMI, and its Turkish partners, is very good.” 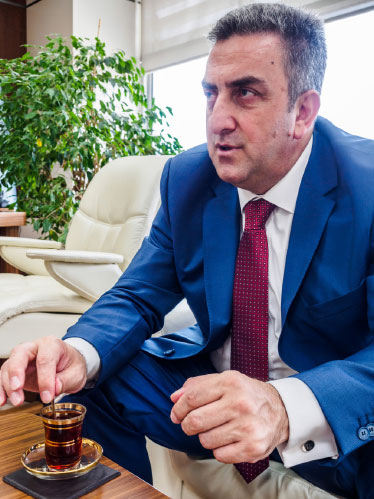 Yildirim welcomes the İGA-hosted ACI Airport Exchange in Istanbul, 8-10 December. “It will serve as a platform and shop window for Turkey’s substantial airport development, construction and management capability.”

Indeed, Yildirim’s vision of DHMI’s role in Africa is not something ‘happening’ in a vacuum. He references a whole range of “Turkish Government initiatives and Turkey’s rising role in Africa” in which DHMI is clearly emerging as a strategic leader, along with the presence of Turkish Airlines, which has just announced its 45th destination in Africa – more than any other non-African airline.

“Both the government and Turkish society have long had strong African initiatives which have been enthusiastically embraced in business circles. I plan to travel with the Prime Minister and President of the Republic on missions to Africa. Our goal is to take airport partners in several countries.”

Yildirim directly tackles the financial challenge in confident, practical terms: “Many African states cannot afford to modernise their airports, our idea is to use the PPP model which has been so successful in Turkey – they won’t have to pay a penny for new airports, while our desire is to operate concessions with our local partners for up to 30 years. We have massive capabilities – we are planning to finish Istanbul New Airport in only three years. We know how to make successful joint ventures, and all the indicators are that African attitudes to our presence are good.”

In order to pursue its international objectives Yildirim explains: “We need to change some of the statutes governing DHMI to work in other countries. Meanwhile, efforts are underway to establish an international team in DHMI.” One of the tasks is to obtain an ICAO training certificate, although, for the time being, DHMI is considering a partnership with daa, the Dublin and Cork airports operator, which does have this qualification.

“DHMI’s globalisation is going forward, we are going to take this opportunity. In looking to export internationally, the quality and expertise of our 10,000 people is good – the ‘globally yours’ motto of Turkish Airlines is a good one and also describes the global presence that DHMI fully intends to emulate. We have proved we can do a lot of things in terms of airport management. Furthermore, the capabilities of the construction companies of Turkey are now among the fastest and best in the world.” 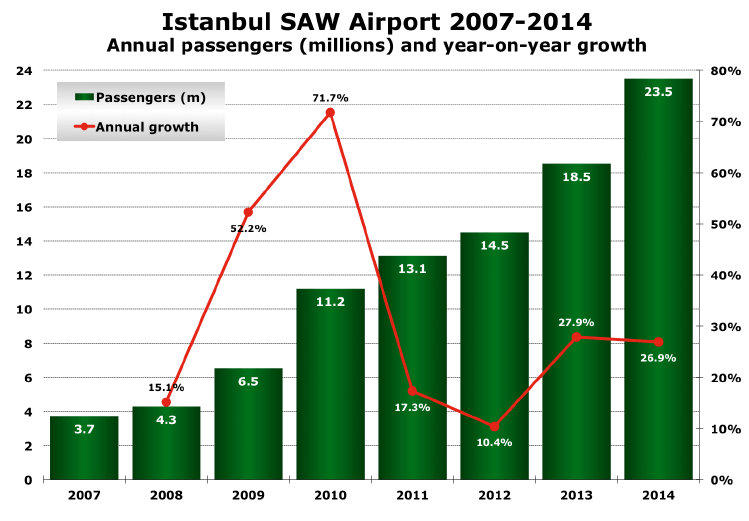 Yildirim (right) explains the strategy to enter the international arena: “DHMI and the Turkish airports industry have a real opportunity to export and globalise – it’s a logical progression from the strong growth of Turkish airports and of Turkey as an important economic power.”

In this respect Yildirim welcomes the İGA-hosted ACI Airport Exchange in Istanbul, 8-10 December. “It will serve as a platform and shop window for Turkey’s substantial airport development, construction and management capability.” (Yildirim was commenting just days after Limak, a leading partner in Istanbul New Airport, announced it had won a $4 billion tender to build a new terminal at Kuwait International Airport.)

“I want a system of eight runways in Istanbul”

In a year when Turkey has again been very much in the news, Yildirim says both the airports and the Turkish economy have yet again shown great resilience (as they have throughout the many challenges faced since 2000, since when Turkish GDP has trebled to exceed $1.5 trillion). “I’m optimistic Turkey’s brand name is going up, and our increasing traffic proves this assertion. We had some disadvantages in the past, in the 20th Century, but now we have self-confidence. The logic behind Istanbul New Airport is because the centre of gravity in aviation has shifted south and east. We must constantly prepare for this, so, in addition, a second runway will be ready at Sabiha Gökçen Airport within 2.5 years. I want a system of eight runways in Istanbul because growth in the next 10 years will be much like the last.” 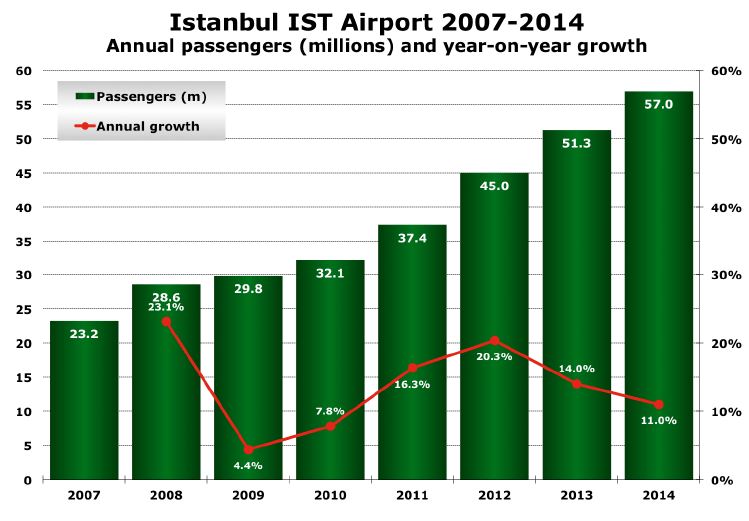 DHMI is the sovereign landlord of all 55 airports in Turkey. Most of these are directly controlled and operated by DHMI (employing 10,000 staff) although the country’s key airport terminals are managed under concession agreements through Turkey’s highly successful Public-Private Partnership (PPP) model, strongly implemented from the late-1990s onwards.

Istanbul New Airport:
Opening in 2018, this 25-year concession was secured with a record €22.2 billion bid in 2013 by İGA Havalimanı İşletmesi A.Ş., a consortium of five major Turkish construction companies. Currently under construction, the €10.2 billion mega-hub has been designed for phased expansion to 250 million passengers and six runways.

Istanbul Atatürk Airport:
Operated by TAV Airports, which in turn is 38% owned by Aéroports de Paris. In Turkey TAV also operates the capital city airport, Ankara, and others serving key cities and tourism centres at Izmir, Gazipasa-Alanya, and Bodrum.

Istanbul Sabiha Gökçen Airport:
This 20-year air terminal concession, expiring in 2028, is wholly-owned by Malaysian Airports. The airport rose from an insignificant 245,000 passengers a decade ago to exceed 25 million this year. DHMI is building a second runway, opening by 2018.

Antalya Airport:
Turkey’s second-biggest airport (although soon likely to be overtaken by Sabiha Gökçen). The terminal concession, ICF Airports, is a joint venture between Fraport and Turkey’s IC Içtaş, maturing in 2024.

Turkey’s rising role in Africa is deeply embedded in the Turkish political and economic sectors. In modern times it has a recognisable starting point in the mid-1990s and today the Turkish Foreign Ministry asserts: “Africa constitutes one of the prime orientations of Turkish foreign policy. As an Afro-Eurasian state, Turkey’s opening up to Africa is not just the reflection of a transient political and economic expectation, it is the product of a process with strong historical and cultural aspects.”