“Airports can have a different conversation with Ryanair now”

Kenny Jacobs, Ryanair’s Chief Marketing Officer (left): “We want half of our growth to come from primary airports – because we are listening to where people, where consumers want to fly.” A massive expansion in Germany is planned.

Kenny Jacobs is still only just over a year into the job of Ryanair’s Chief Marketing Officer, a position which didn’t even exist until the Irish ultra-low cost carrier re-invented itself as the more-like-easyJet, nicer Ryanair in the second-half of 2013. Now, instead of relying on the free publicity generated by the designed-to-shock statements and claims of its CEO (who has almost disappeared from the headlines) Ryanair has slick, on-message, peak time TV advertisements appealing to families and business executives.

Jacobs, formerly CMO of Moneysupermarket, and Brand and Communications Director of Tesco, was brought in to be central to Ryanair’s transition by taking the helm of its three-year “Always Getting Better” programme, which entered its second year in March with the launch of an unprecedented “Ryanair Customer Charter”.

All the Ryanair results point to success for the revolution, with the 2015 financial year showing a 66% increase in net profit to €870 million, and an 11% rise in passengers – now universally referred to as “customers”. While Jacobs has been busy changing the mindset of millions of European consumers to achieve this, he also claims that, within the airline, it hasn’t actually been that difficult for staff to embrace the new customer-friendly culture. “I have found it really easy – whether at the gates or on the flights – our staff are much happier without bag sizing and free seating anxieties. It is clearly a more successful model. We’re still focused on the low costs, we’re just listening more and open to changes.”

The shift to primary airports

The change in consumer profile from the “abrupt culture” has also been mirrored by other very significant changes to the product which have direct consequences for airport partners, especially the recent focus on larger gateways such as Brussels and Copenhagen: “We want half of our growth to come from primary airports – because we are listening to where people, where consumers want to fly. We now have a different product to talk to airports about – airports can have a different conversation with Ryanair now. There’s no longer a long list of airports which won’t do business with us any more.”

However, Jacobs admits that the effect is not being felt in all markets. Despite growing overall seat capacity by around 8% this summer, Ryanair’s presence in Norway is down around 15%. Asked about this, Jacobs says: “We are not so big in Scandinavia because SAS and Norwegian are at war and we’re letting them get on with it.” Meanwhile, he says Ryanair has more ambitious plans in a giant country market – Germany – where it currently has just a 4% share of the market, compared to an average of 15% across Europe as a whole. 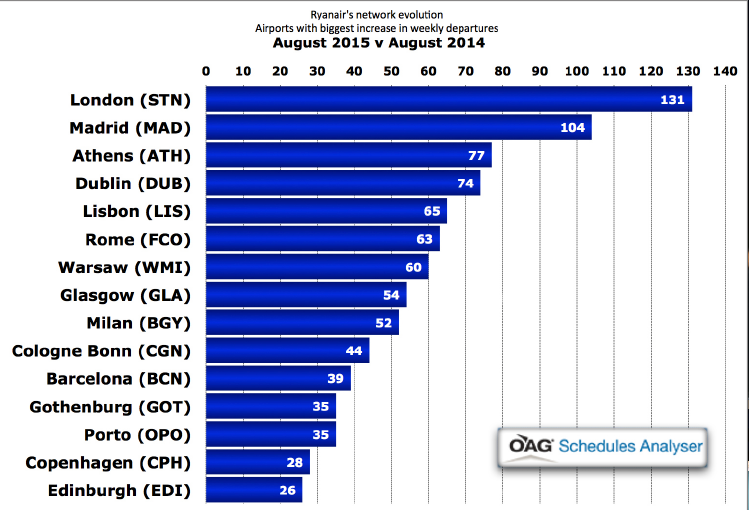 Ryanair is still a champion of regional airports, but the top seven fastest-growing airports in its network this summer are all European capitals.

In line with its big German ambitions, a base at Cologne Bonn Airport was opened last year (to complement the airline’s existing Bremen, Hahn and Weeze bases) and Berlin Schönefeld will also become a major base at the end of this year. Cologne Bonn and Berlin will also be connected by Ryanair starting up to five daily flights from September. These connections will directly serve the large federal employee market – many German civil servants still live around the former “West German” capital of Bonn. Indeed, Jacobs even admits he has talks planned with the Federal Procurement Office to do a deal on fares – a far cry from the past when some European government agencies openly refused to ‘buy Ryanair’. This important German growth will be helped by the arrival of the new 737-800s before the end of the year, as the airline (comfortably) targets passing the 100 million passenger (“customer”) milestone in its next financial year.

With a changing business model Jacobs says that the airline is now also developing a very sophisticated customer segmentation model. “We have defined 25 different segments based on where customers fly – age, postcode, when they fly, their digital behaviour, ancillary penetration, etc. We have been harvesting data for three years now. Soon our high-earning customers in west London will get a very different website compared with a price-conscious customer in Bucharest. Are we seeing more high-earners? Yes. Are we getting them from airlines like easyJet and Lufthansa? Yes. These digital innovations and use of data are the most exciting things influencing our model over the next few years. Airlines have been behind banks and retail – even though over 90% of the bookings are made through our own channels, something they would envy.”

The onboard product is also evolving. “We are introducing new uniforms, we will have the Sky Interior on the new 737-800s arriving this year, the yellow will be toned right down and there will be slimline seats.” Although some things never change – they still won’t recline. “But we are introducing coat hooks. There won’t be a place to put the inflight magazine, but consumers wanted coat hooks most of all. The food is also getting better. WiFi will probably come in about two years’ time, but we haven’t decided on what model. It could be Unilever-sponsored or perhaps P&G [where Jacobs also used to work] – I am sure they would love to present Pampers to our customers.”

Then (left, 2012) and now (above). Since Jacobs’ arrival last year the deliberately-amateurish and unashamedly trashy has been ditched in exchange for a slick-Samsonite appeal to executive travellers with higher-yielding business fares and products. Jacobs is even negotiating with Germany’s Federal Procurement Office to provide travel for civil servants.

As an airline which has always been firmly disinterested in the hassles of connecting – even self-connecting over its major bases like London Stansted – another revolutionary change in strategy has come about with Ryanair now viewing connections, or even interlining with other carriers, as a possibility. “There are in fact some real opportunities – a transatlantic airline operating into London Stansted would have much bigger choice of Ryanair destinations than there are European connections from London Heathrow – such an airline should come and talk to us. I would be quite surprised if connections and feed don’t happen in the next five years.”