Researching Decarbonisation… from the ground up 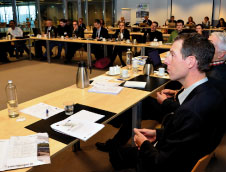 Industry stakeholders are working together on a project called ‘Decarbonated Airport Regions’ to investigate the issue of pollution from surface access.

The Airport Regions Conference, a Brussels-based organisation representing regions with an airport on their territory, made a study on the share that surface access and ground operations have in the total carbon emissions of an airport. Up to half of the carbon comes from the aforementioned two, while the rest is related to the aeronautical activities.

During the same time span, the Dutch government decided that Eindhoven Airport as the second national airport in the Netherlands will have to help Amsterdam Airport Schiphol to absorb part of the growth in air traffic for the next decades, as the main Amsterdam hub is reaching capacity.

“As Eindhoven Airport will grow substantially during the coming years, both CO2 emissions and accessibility will become a problem if we don’t act. Hence, the idea was born to start a project with other regions in Europe to try to find new and innovative ways to reduce CO2 emissions at the airport and at the same time improve airport accessibility in a sustainable way. This project is called d-AIR (Decarbonated Airport Regions) says Ron Nohlmans, Mobility Manager for the City of Eindhoven and Project Manager for d-AIR.

The project has 14 partners from 10 European regions and airports, and is funded by the European Regional Development Fund through Interreg IVC (which funds inter-regional projects). Key people at airports and within the local public transport companies, the local authorities are let to exchange best practices on the steps to be taken in terms of CO2 reduction from surface access and airport operations.

“d-AIR is a project that aims at gathering knowledge in order to significantly impact on the carbon emissions levels,” says Lea Bodossian, Secretary General of the ARC.

Getting to the airport usually involves a significant number of cars, too many times stuck in long lines of traffic, thus creating pollution. Public transport, while very well developed at some of the airports, is not yet designed to cope with the influx of passengers and sometimes it is difficult to explain to passengers why it is the better solution. A large amount of the car drivers are also those working at the airport, and they don’t live in the main city, or the public transport system is not designed to accommodate their night shift.

At Bologna Airport, one of the d-AIR partners the car/bus split is 65-35. There are 300 buses per day at the airport and 6,700 cars. If there would be an increase of only 10% of bus usage, the airport would see over 1,000 cars less that would be replaced by no more than 80 buses, thus reducing traffic and emissions.

d-AIR does not deal only with surface access, it provides a framework to help the airports engaged in the project in their carbon accreditation approach. Some of the partners, such as Eindhoven Airport and Swedish airport operator Swedavia are Airport Carbon Accredited at one of the 4 levels of the programme, for some time now. Swedavia is now fully carbon neutral across its suite of 10 airports, while others are at different stages of the process, such as mapping or reducing their CO2 emissions. This prompts the leading ‘green’ airports to find innovative ideas to go further, and it also allows the airports that are new to the process to benefit from the experience of others.

An important part of this project is the involvement of business and research communities. This has proven successful, with many of the members beginning to form a core group of potential suppliers, innovators, creators and people that can make the ideas of the project come to life. Some of the ideas already seen in these meetings include systems for buses on demand, electric vehicles in the airport, innovative cooling and heating systems for the terminal or intelligent lighting systems inside the buildings. All of these will have a significant impact on CO2 emissions.

“We expect to learn from good examples in Europe, especially from our partners at Swedavia who are leading in CO2 reduction and ultimately carbon neutrality. We hope to help each other to find the right way forward towards green airports”, concluded Mr. Nohlmans.