Recognising the importance of airport wayfinding 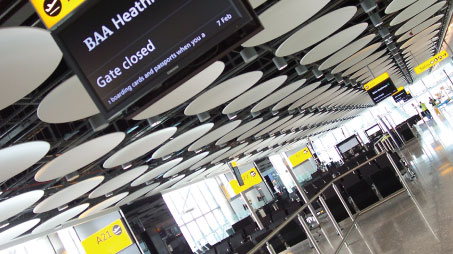 Recognising the benefits of simplified wayfinding, Aéroports de Paris has recently introduced the ‘My Way Aéroports de Paris’ smartphone application. This ‘app’ covers an area of 200,000sqm and currently covers Paris-Charles de Gaulle’s Terminals 2E and 2F, the TGV railway station and the Premium sector of the 2E and 2F car parks.

Divided into four sections – Routes, Leisure, Services and Favourites – it allows passengers to determine their position in the terminal; obtain directions to various useful destinations; obtain information about the location of leisure and services areas; and save past searches in the Favourites section for future reference. The app has so far proved to be successful among users and Aéroports de Paris now has plans to expand the service to all of Paris-CDG, as well as Paris Orly, next summer. It will then be integrated into the overall ‘My Airport’ application.

“With this app, you know where you are in the airport, it includes points of interest, it’s totally intuitive, and it can direct you right to your boarding gate,” explained Olivier Tarneaud, Head of Marketing, Aéroports de Paris. 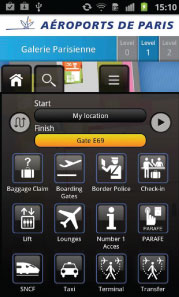 Tarneaud: “With this app, you know where you are in the airport, it includes points of interest, it’s totally intuitive, and it can direct you right to your boarding gate.”

Aéroports de Paris is not the only operator to offer such a service and earlier this year Copenhagen Airport introduced an app featuring ‘augmented reality’, which allows travellers to use their smartphone camera to determine how far they are from a certain point in the airport and how to get there.

However, while such technologies cater to the demands of the modern traveller, Tarneaud explained that permanent signage still remains key to providing a simple wayfinding experience. 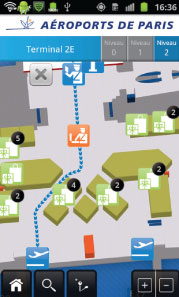 The ‘My Way Aéroports de Paris’ app covers an area of 200,000sqm and currently covers Paris-Charles de Gaulle’s Terminals 2E and 2F, the TGV railway station and the Premium sector of the 2E and 2F car parks.

As well as increased passenger satisfaction, for the airport, effective signage and wayfinding can also lend itself to commercial benefits. “When you are in control of the information you need, it gives you additional time in the airport and you’re then much more likely to spend time in the retail area,” Tarneaud said. Furthermore, in the near future, geolocation technology will also allow smartphone users to receive promotional offers, specifically tailored to the passenger and their location within the terminal. This interactive and personal service, coupled with effectual permanent signage, can help to ensure a simple journey through the terminal building, with additional benefits for both the passenger and the airport. 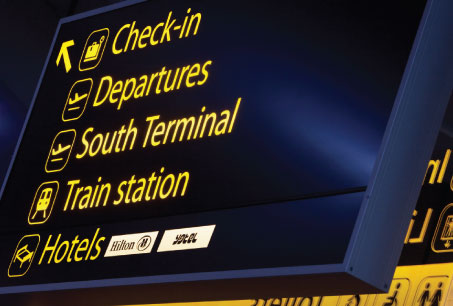 Merson Signs has been selected to progress to the Regional Finals of the Business Thinking initiative run by HSBC and supported by The Telegraph.

Merson Signs has been selected as one of only six companies from Scotland and Northern Ireland who will progress to the Regional Finals of a national business initiative run by HSBC and supported by The Telegraph.

Business Thinking is HSBC’s initiative to find and reward the UK’s best business thinkers, and to enable businesses to exchange ideas, create new contacts and of course, challenge their thinking.

As regional finalists, representatives from Merson will go to Paris to take part in a “Thought Exchange” to meet other companies and industry contacts and find out about international business development opportunities. As a business that has developed significantly in the international market over the past 18 months, the management jumped at the chance to be involved in a competition with a strong international focus.

Merson’s Sales & Marketing Director, Gavin McMurray, said: “A major attraction of entering was to get to talk to other businesses, both in Britain and in France. That opportunity to network will allow us to share and learn business insight and be exposed to different business ideas in the European and wider international market.”

As well as setting up an office in Riyadh in 2010 to manage the growing number of projects won in the Middle East, Merson Signs has also grown domestically.

On return to the UK, the Regional Finalists will pitch to a panel of judges, who will select two Regional Winners per region. The Regional Winners will then be invited to attend HSBC’s prestigious International Insights event, where the overall winner of Business Thinking 2011 will be revealed.

Airports are constantly striving to create an improved passenger experience and are increasingly looking to innovation and technology for solutions.

Like all things, learning how to improve infrastructural efficiencies such as resource management, while devising ways to reduce queues and provide more time in dwell and retail areas is easy when experienced practitioners are on-hand.

Human Recognition Systems (HRS), a leading biometrics company, has been working with airports for nearly 10 years to advance the technology to achieve these objectives. This includes six of the top 10 UK airports, and in May this year HRS completed a major deployment and world first.

MFlow Journey uses passive facial recognition to help measure and manage the efficient flow of passengers throughout an airport. It’s designed to dramatically reduce passengers’ queue times by relaying queue analysis information to management who can then make informed decisions about when and where resource is required.

“The technology helps the airport to become much more efficient on an operational level. On top of this, regulatory and service level agreements are much better supported,” explained Chief Executive Neil Norman.

“In turn,” he said, “the technology helps to keep passengers’ stress levels to a minimum. This directly delivers the outcomes that passengers’ consistently refer to during research – less waiting in queues and more time to relax.”

MFlow Journey can also drive the display boards, which indicate the likely queue times to passengers in relation to the associated security lanes’ zones. The technology is configurable so it can be changed according to business needs. 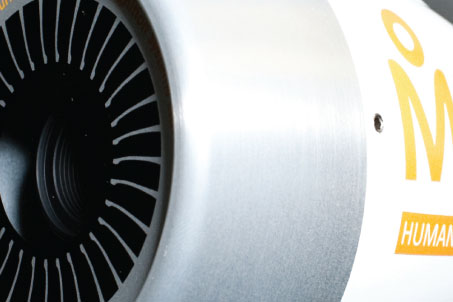 MFlow Journey uses passive facial recognition to help measure and manage the efficient flow of passengers throughout an airport.