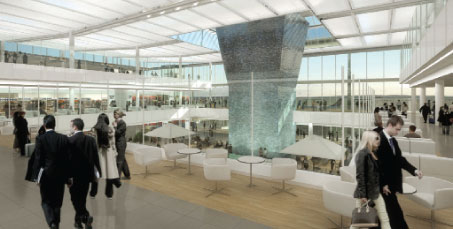 Kerkloh: “We are gaining handling capacity for an additional 11 million passengers a year, which puts us in the order of magnitude of today’s Frankfurt Airport.”

Having been constructed in 2003 as a joint venture between the airport’s operator, Flughafen München GmbH (FMG), and Lufthansa to handle hub traffic for the German flag carrier and its Star Alliance partners, Terminal 2 is expected to handle its full quota of 25 million annual passengers by the end of this calendar year.

The construction of the new satellite facility is the latest step in the long-term relationship that has been established between airport and airline and as with Terminal 2 itself, the project will be jointly funded, with FMG footing 60% of the cost and Lufthansa covering the remaining 40% of the €650 million development.

Designed as an addition to the existing baggage sorting hall on the apron to the east of Terminal 2, a 600m pier will allow for the addition of 52 gates. As it is not a standalone terminal, passengers using the facility will use the check-in and ticket desks and the arrivals area in Terminal 2 before transferring via an underground transportation system between the buildings, which will take just 50 seconds.

In 2010, Munich Airport experienced a year-on-year of increase of +6% in passenger traffic, with almost 35 million passengers passing through the airport over the 12-month period and according to Kerkloh, “the planned capacity expansion will take Munich Airport to a new dimension”.

He said: “We are gaining handling capacity for an additional 11 million passengers a year, which puts us in the order of magnitude of today’s Frankfurt Airport. This will enable us to maintain the high standards of quality achieved by our airport today as a connecting hub even with the anticipated traffic volume in the future.” This increase in traffic is expected to result in as many as 58 million annual passengers by 2025.

“The new satellite facility is a decisive step for Munich Airport in keeping pace as a premium hub competing at the European and global level. With this increase in capacity, we are enabling Munich and Bavaria to maintain their excellent links with markets and major cities all over the world.” 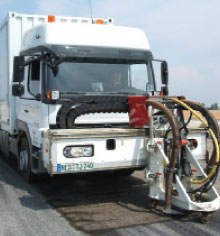 Weigel has recently completed over 40,000sqm of rubber removal services at the Moron Air Base runway.

Rubber deposits were already quite significant on both touchdown zones, as the previous rubber removal intervention took place more than three years before.

One of the most recent TrackJet models successfully removed rubber on two different pavement types, with homogeneous results and without damaging the surface, paint marks, sealings or the arresting system.

Temperatures of over 35ºC were not a problem for the equipment, designed to work in tougher environments, such as in the Middle East, where several TrackJets are already in use.

He also noted the equipment’s capacity to control the water jets according to the thickness of the rubber layer prevented damage.

Ruben Figueiredo, from Weigel/TradeTarget, who oversaw the project, explained: “After almost 60 consecutive operating hours, we left Moron without one single failure and with the customer pleased. That’s our goal for all missions, on asphalt or concrete pavements, on military or commercial airfields, removing rubber deposits or paint marks.” 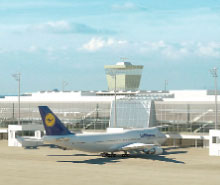 Construction work on the new satellite will commence this year, ahead of its opening in 2015.

Kerkloh continued: “The satellite will mean pushing quality to the next level for everyone concerned. Passengers will have easy and convenient access to their aircraft through the additional jet bridges gained in the expansion. Today we are already one of the world’s best airports according to passenger surveys. With the satellite terminal we will be able to raise this quality level even higher. 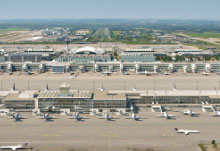 The Terminal 2 satellite facility will cover an area of 123,000sqm and will boast a total of 52 gates and 42 passport control stations.

“The building itself, designed by the Munich architects Koch+Partner, who created the existing Terminal 2, is a new concept still in keeping with that building’s appearance. The new facility, flooded with natural light from its wide glass facades, will offer a high-quality airport experience.”

Koch+Partner, the architects of Terminal 2 at Munich Airport, have also been commissioned as general planners with planning the satellite terminal.

In a first stage, the satellite will be built as an expansion of the existing baggage sorting hall on the eastern apron, with a handling capacity of about 11 million passengers/year, in addition to Terminal 2. This midfield terminal is a functional and operational extension of Terminal 2 without its own landside connection. Passengers departing and arriving from the satellite will always check-in and exit at Terminal 2. Via generously glazed stations, the passengers are led to an underground train, which takes them from Terminal 2 to the satellite in just 50 seconds.

For the new satellite facility, Koch+Partner aims to reduce the CO2 emissions relative to Terminal 1 and 2 by 40%.

Simplicity, clear lines, obvious circulation routes and good orientation are the design principles, as they were for Terminal 2. Additional design criteria are generosity, transparency, optimal indoor climate and acoustics, functionality and aesthetics and a multiplicity of visual links from inside to outside. With regards to sustainability and energy efficiency, the architects and planners pursue an ambitious target: to reduce the CO2 emissions relative to Terminal 1 and 2 by 40%.

Like in Terminal 2, extensive shopping and dining areas covering approximately 9,000sqm are located in a light-filled central ‘Plaza’, inviting the passengers to take a stroll. The satellite will have a length of 600m, a gross floor area of approximately 120,000sqm, 52 boarding gates and 27 aircraft stands.

Start on site will be in autumn 2011; operation is scheduled for the 2015 summer flight plan.