Ranging from the passenger’s arrival at the airport, through to the airside experience and boarding process, the airport interior is playing an increasingly vital role in shaping the overall experience of those passing through the facilities.

Kaye: "We were given a brief to refurbish Terminal 1 Arrivals at Manchester Airport and we looked carefully at all of the materials we specified to see where we could minimise our carbon footprint and be as eco-friendly as we could."

While expansive commercial facilities and simple wayfinding may have previously held the key to ensuring a pleasing experience, modern day airports are placing a renewed emphasis on creating a more positive ambience for all travellers.

“There is an inherent conflict of expectations, which must be managed at the interface between airport and travelling passenger,” explained David Kaye of David Kaye Design, which has been appointed to design various airport interior projects, ranging from Manchester to Abu Dhabi. 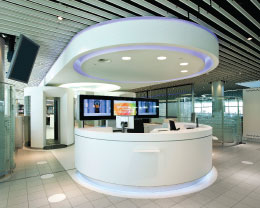 The use of lighting, images and interior design have been applied to the Schiphol Innovative Gate project to create a relaxing and aesthetically pleasing environment.

“For the traveller, the most convenient arrangement would perhaps be to simply turn up and walk straight onto the plane, like taking a bus. From the airport perspective, there are many requirements to check first; validity of travel documents, anti-terrorism security checks, criminal activity checks, as well as organisation of baggage and simply ensuring that the people with tickets get on the correct flight.

“So, working on the assumption that passengers regard just about all of the airport activities as irksome, the designers’ challenge is to attempt to offset that sense of inconvenience with an environment which is logical in its layout and intuitively easy to use. If it is possible to create a calming atmosphere, then this is a high objective.” 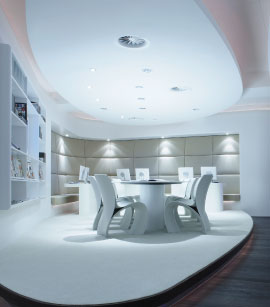 The 600sqm Privium ClubLounge has been specifically designed to offer Privium Plus members at Amsterdam Airport Schiphol a relaxing waiting experience.

While the trend has veered towards creating large open concourses to optimise the passenger flow, smaller lounges and quiet zones provide an insight into how airports are developing to cater for those who wish for a more calm and relaxing experience.

One such example is evident at Amsterdam Airport Schiphol, where the Innovative Gate concept has been introduced. The idea at the heart of the project is that the application of lighting, images and interior design will allow passengers to enjoy a modern, comfortable and aesthetically pleasing stay.

Dynamic lighting effects change to reflect each stage of the boarding process, while large billboards have been placed at the gate entrance to display photos or videos of the destination alongside the relevant flight information.

Diederick Hein, owner of INTOS – the company that developed the specially designed furniture for the project at Schiphol – said: “The idea about airports is that the most important thing is the number of passengers who use the airport. At Schiphol, though, they say it’s not just about the number of passengers but also the quality of the airport that’s the most important thing. That’s why they’re doing a lot of projects like this and the Privium ClubLounge to improve the ambience and quality on the surface of the airport.”

As an established, innovative and sustainable design company, Nurus’ design ideas are based on both function and aesthetic needs so the outcome is always architectural and timeless, while durability is of utmost importance.

It has different seating options and is available in metal, various colours of polyurethane and leather, or technical fabric upholstery.

While airports recognise the importance of providing an aesthetically pleasing terminal interior, both Kaye and Hein explained that two vital factors must always be considered in both the design and development stages: Cost and environmental efficiency.

Kaye explained: “We were given a brief to refurbish Terminal 1 Arrivals at Manchester Airport and we looked carefully at all of the materials we specified to see where we could minimise our carbon footprint and be as eco-friendly as we could.

“The area where the biggest energy savings were made was in the types of light sources which were used. A great deal of LED lighting was used, most notably in replacing halogen downlights and feature accent lighting. In some refurbishments joinery items can be re-used such as doors and wall panels, and column claddings which can be over-veneered or laminate covered.”

The importance of the environmental focus was also echoed by Hein, who said: “For the last 2-3 years, it has been very important to show that as a company, you’re involved in making your products ‘greener’ and the airports are also communicating the importance of this. The designers and architects also want to know if their plans are financially viable so we also have to make sure that what’s being done fits into the overall budget.”

With airport marketing strategies largely divided between low-cost and high-end business services, Kaye explained that, post-recession, consumers will be better placed to decide which approach they prefer and this, in turn, will again impact on future terminal design. “There is already strong anecdotal evidence that many people who would in previous years have flown business class but who have been tempted into taking ‘no frills’ flights have a deep resentment of being asked to pay for small extras as part of the whole de-constructed experience,” he said.

“My view is that, like society in general, airports will become polarised with grand terminals and lavishly appointed lounges available to those with the ability to pay, who value the prospect of separation from the mass crowds in the terminal.

“Then there will be the standard terminal experience of hustling and bustling retail experience with plenty of access to shops, restaurants and bars.”

Furthermore, low-cost terminals may also become more commonplace, and this “is already influencing the way that airport operators approach the design of the terminal facilities.”