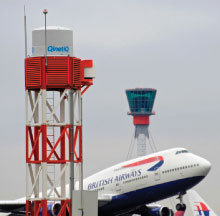 Two of the most dramatic aviation incidents in recent years have highlighted the dangers posed to airlines by bird strikes and runway debris. The Concorde tragedy of 2000 in which 113 passengers were killed, was caused by a titanium strip, no larger than a school ruler, which lay undetected on the runway. This strip burst Concorde’s rear tyres, fragments of which subsequently punctured the aircraft’s fuel tank causing a catastrophic explosion.

As the trial of five individuals charged with culpability for the incident progresses in Paris, the risks associated with air travel are again at the forefront of public consciousness. The trial in Paris sees two staff from Concorde’s manufacturer Aerospatiale, two staff from Continental Airlines and one official from the French Civil Aviation Authority charged with manslaughter.

More recently, the incident involving an emergency landing on the Hudson River highlighted the danger posed by bird strikes. In this incident, the plane was forced to ditch after its engines were stalled by a bird strike shortly after takeoff.

Thankfully, runway debris and bird strikes rarely cause fatal accidents, however, they continue to represent a genuine risk to passenger safety and a significant cost to the industry.

Fuselage inspections regularly record damage caused by foreign objects on the runway. In addition to this, minor bird strikes are a regular feature at certain airports.

A study into the economic cost of runway debris, carried out by the Insight SRI consultancy, revealed that for every 10,000 aircraft movements, airlines’ runway debris damage costs are US$263,000. This equates to direct debris costs at the 300 largest airports totalling nearly US$1.1 billion. This excludes indirect costs – delays, plane changes, fuel inefficiencies which, when included, bring the actual cost up to US$12 billion per annum.

The main direct costs to airlines caused by runway debris are engine and tyre damage. The frequency of engine damage is revealed by data provided anonymously by a US commercial airline, which detailed 117 engine events at a single US airport over a 12-month period.

Due to these incidents, 65 blade pairs had to be replaced and 80 blades blended (repaired). Basic blending of blades requires an aircraft being taken out of service for 8-12 hours. In addition, the cost of blending a single blade is between US$4,000 and US$5,000.

At one US airport over a 12-month period, a major US carrier recorded punctures and tyre tears due to FOD necessitating 158 tyre replacements. The average cost of a tyre is US$3,261.

Meanwhile, the US Federal Aviation Administration has documented 7,516 wildlife strikes involving US civil aircraft in 2008 alone. The vast majority of these strikes involved birds with 72% of strikes occurring at or below 500 feet. Since 1988, strikes have resulted in the deaths of 229 people.

The current method of detecting birds and foreign objects involves airport staff driving along a runway attempting to detect FOD with the naked eye. This is a challenging task, and the ongoing level of FOD damage suggests it is far from 100% effective. 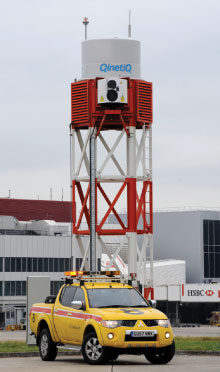 The Tarsier system is already in place at a number of international airports, including London Heathrow.

The Tarsier system is already in place at a number of international airports, including London Heathrow. As Neil Pritchard, Heathrow’s airside operations manager, puts it: “We have been working together since the system’s introduction and trust QinetiQ to support the installation and help us realise the full value of the investment… for the travelling public, the biggest benefit will come when this kind of safety equipment is ubiquitous, reducing risk at every airport. Right now, however, Heathrow is proud to be leading the way.”

The system is also deployed at Vancouver, Dubai and Doha International airports. In Vancouver, the system has detected items such as a 12m metal grounding wire, which airport staff believe had the potential to cause a major incident. Director of airside operations at Vancouver Brett Patterson said: “Snatched up by an aircraft propeller or sucked into an airliner’s low-slung jet engine – this could have spelled disaster. Recovering this cable virtually paid for our system.”

Awareness of potential threats to safety and counteracting these threats as effectively as possible is an obligation for the aviation industry. The safety of passengers and crew is always the number one priority of airports and airlines.

As the level of air traffic increases globally, so too must safety standards applied at international airports. Where appropriate technologies exist that can significantly improve safety levels at airports, they merit careful consideration by all those responsible for passenger safety.