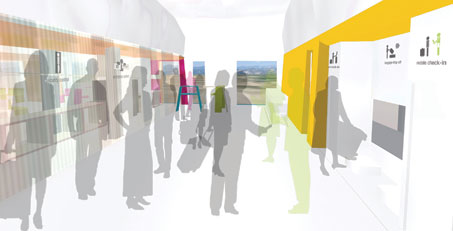 Melcher: “The Mobile Terminal is the perfect tool to provide an airport with the facilities needed without losing any investments. If you do not need it anymore, you can just remove it and install it on another site where it’s needed.”

In emerging markets around the world, a sudden increase in airport passenger traffic is a common theme and the mobile terminal is starting to play an ever-increasing role in allowing airports to cater for additional business during peak periods. Due to the current economic climate, permanent expansion may not necessarily be a feasible option and, due to this, temporary terminals are continually being explored as an alternative to long-term, costly redevelopment. During the Euro 2004 football championship in Portugal, the short-term benefits of the temporary terminal were elucidated as Siemens provided Lisbon Airport with its CapacityPlus model to help the airport cope with the sudden passenger influx.

Six years on, however, the temporary terminal industry is still being developed and The Mobile Terminal (TMT), an Austrian-based company that specialises specifically in this sector, is working within various emerging markets to assist airports in dealing with an increase in passenger traffic and to provide small cities with better air transportation access.

As well as exploring markets in the Ukraine, Russia and India, TMT is also working on a project in partnership with an as yet unidentified Austrian airport. In addition, a further venture in Villach, Austria, sees TMT provide the town with its own air terminal, which is linked with airports in Ljubljana, Klagenfurt and Venice through shuttle services.

“The idea is to develop mobile passenger handling facilities to create a tool for quick and easy activation of destinations, to bridge capacity shortages without heavy investment and to provide remote or offsite check-in facilities,” said Melcher.

Melcher: “We expect to see this industry grow in the near future and we especially see huge potential in short-term use projects.”

Among the company’s products is the TMT Basic Module, which consists of a basic departure and arrivals unit, optimised to handle up to 200 passengers within 90 minutes. All of the equipment is pre-installed within the terminal and once it is delivered, it can be constructed and prepared for operation within just seven days.

The company also offers the Basic+ Module, which caters for up to 400 passengers within 90 minutes, and the TMT Village, which provides an all-encompassing terminal solution to cater for seasonal peaks.

Melcher said: “The Mobile Terminal is the perfect tool to provide an airport with the facilities needed without losing any investments. If you do not need it anymore, you can just remove it and install it on another site where it’s needed.”

With air traffic forecasts suggesting continued passenger growth over the next few years, and with the industry still showing an understandable reluctance to invest in ambitious development plans in an uncertain financial climate, Melcher is confident that a market exists for mobile terminals. “We expect to see this industry grow in the near future and we especially see huge potential in short-term use projects,” he said.