Making RFID work – the most effective solution to lost baggage? 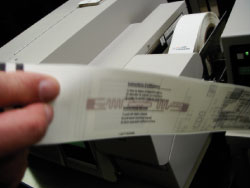 RFID has shown great potential since it was deployed for the first time in 2005 at Hong Kong, Milan Malpensa and Las Vegas McCarran airports, witht a read rate of over 97% compared with around 80% for conventional bar codes.

According to a 2008 baggage report by SITA, the aviation industry lost 12.4 billion in 2007 as a result of mishandled baggage, reflected by increasing passenger numbers and congestion, cost pressures and tougher security regulations, making it more difficult to track and trace bags.

A concerted effort is being made with RFID to help address this and there is still hope that the technology could soon become the panacea to lost luggage.

Since the technology was deployed for the first time in 2005 at Hong Kong, Milan Malpensa and Las Vegas McCarran airports, RFID has shown great potential, with a read rate of over 97% compared with around 80% for conventional bar codes. “Based on the results of pilots and trials, we estimate that RFID can eliminate approximately 20% of mishandlings through more accurate tag reading and better visibility over the entire baggage operation. There are other benefits through track and trace and operational visibility, but this has not been quantified,” explained Lorne Riley, IATA’s assistant director, corporate communications.

However, the flexibility of RFID has presented numerous challenges for airports in deciding how best to implement the solution, Riley explained. “The wide range of RFID tags means that a prospective user has to make several decisions – should the tag be passive, active or semi-active, what memory size should there be, what air protocol should be used and should the information be encrypted?”

IATA launched a Baggage Improvement Programme (BIP) last year, to establish the underlying causes of mishandlings. The project has the backing of 230 of the world’s biggest airlines, with a target to improve baggage performance across 20 airports worldwide by the end of 2009. IATA has also set up a task force to develop an international standard for RFID baggage tags.

With check-in a process of many stages, the cited reasons for baggage loss are invariably widespread. According to IATA, almost half of all baggage delay was caused by transfer baggage mishandling, followed by ticketing error and passenger bag switching, failure to load, space-weight restrictions, loading-off-loading errors, tagging errors and arrival station mishandling. 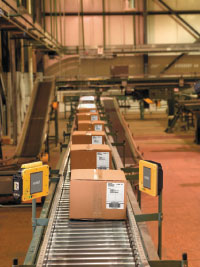 Riley: “A coordinated effort to address mishandling at airports will considerably reduce the overall volume of baggage mishandling.”

There is increasing awareness of the benefits RFID can bring in the application of transfer baggage, where bags are more prone to go missing. “Transfer baggage is the number one issue for airlines and is still listed as the reason for over 40% of all baggage mishandlings. It is very hard to scratch below this surface classification, and this is where RFID track and trace comes into play,” explained Riley.

According to Kim Madsen, system manager (IT and controls) for FKI Logistex (Airport), a leader in automated baggage handling, the best business case you can have at an airport with RFID is on transfer baggage at airports following the hub and spoke model. “With transfer baggage, the barcode read rate is very low compared with check-in baggage as the bag tags can get damaged during transit, so the best solution is to invest in RFID here,” explained Madsen.

FKI Logistex recently launched the industry’s first combined RFID and barcode unit, with full plug-and-play integration into FKI’s sortation system. The first unit will soon be installed at Helsinki-Vantaa Airport, which will be able to sort, track and trace baggage on transfer lines incoming flights from airports such as Hong Kong, which uses RFID. 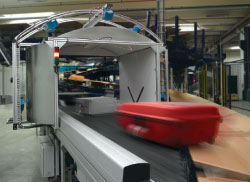 FKI Logistex’ integrated bar coding and RFID solution reads the baggage tags passing through the tunnel, which is mounted on a sorter induction.

The technology is based on a unique tunnel design, enabling accurate assignment of each reading to the right baggage. “The goal for us is to be able to distinguish between bags at 10cm distance apart, where the current minimum space is 40cm,” said Madsen.

FKI Logistex has also developed RampMate, which automatically handles baggage between the Automatic Make-up unit and the point of aircraft loading on the ramp. “The new RampMate system for automating the baggage process not only improves the health and safety aspects of handling baggage, it also enables last minute baggage reconciliation, which can be done on the ramp, just before loading the baggage into the aircraft,” explained Madsen.

FKI Logistex is continuing to trial and improve RFID at its test facility in Denmark under a closed loop system.

Lisbon airport recently reviewed its business operations and chose to integrate a passive RFID solution into its new transfer baggage terminal, which opened in December. The project was delivered by a consortium between Siemens and Lyngsoe Systems and represents the first time an airport has fully integrated only RFID on transfer baggage.

“Lisbon needed to expand their capacity and they decided to use RFID tags only on transfer baggage. We expect RFID to take off – it’s always a matter of who is going to start first but we will see more bags arriving with RFID tags,” said Ida Wetche, Lynsgoe Systems’ marketing manager (airport division). 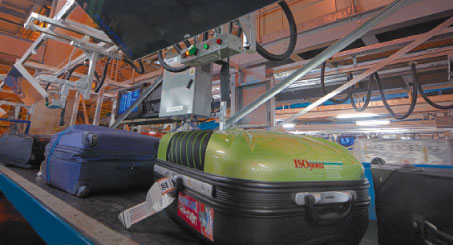 There is increasing awareness of the benefits RFID can bring in the application of transfer baggage, where bags are more prone to go missing. Madsen: “With transfer baggage, the barcode read rate is very low compared with check-in baggage as the bags can get damaged during transit, so the best solution is to invest in RFID here.”

The efficacy of RFID not only depends on the technology itself, but also largely on the airport’s ability to use the IATA standard, to recognise how the solution can work best to suit their own operational needs and through strong collaboration with RFID providers and airlines, explained IATA’s Riley. “A coordinated effort to address mishandling at airports will considerably reduce the overall volume of baggage mishandling. The airport needs to examine what key data drives their baggage performance and how this can be collected. This exercise is key to success, by using RFID as the most cost-effective means of collecting key performance information.”

As part of IATA’s baggage improvement system, IATA Baggage Go Teams will visit targeted airports to offer a customised set of solutions matched to local needs. The scheme aims to translate to bigger savings for airports.