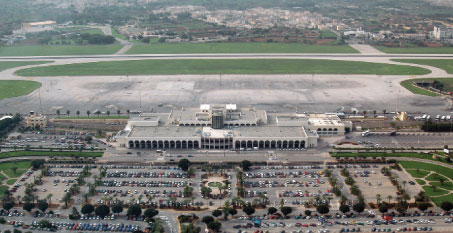 Malta International Airport is participating in the development of the ACI EUROPE Carbon Accreditation Scheme. The proposed scheme enables airports to implement carbon management processes and gain public recognition of their achievements through the attainment of accreditation at different scheme levels.

Malta International Airport’s environmental strategy is focused on incremental improvements beyond what is required by legislation. It is proactive in terms of improving its environmental management and is actively participating in the development of the ACI EUROPE Airport Carbon Accreditation Scheme. Martin Dalmas, technical services manager – airfield, explained the airport’s environmental vision to Ross Falconer.Established in 1992, Malta International Airport (MIA) has in recent years made the move – like a growing number of European airports – to operation as a privatised company. In July 2002, the Government of Malta signed an agreement with the Malta Mediterranean Link Consortium Ltd (MML) for the sale of 40% of Malta International Airport plc. The deal was worth Lm 40 million (€93.16 million). MML is owned by Flughafen Wien AG (57%), SNC-Lavalin Inc. (39%) and Airport Investments Ltd, which is an associate company of the Maltese Bianchi Group of Companies.

Today, MIA plc has the responsibility to manage, maintain and develop all airport facilities, excluding those related to air traffic control activities. By the end of this year, passenger numbers will approach the three million mark. Terminal facilities are undergoing an intensive expansion programme and the airfield infrastructure is being upgraded to facilitate more aircraft movements, the latter currently numbering close to 40,000 per year. As the only aviation gateway linking the Maltese Islands to the rest of the world, the company plays an important strategic role in contributing to the national economy, which relies heavily on the tourism industry. Fittingly, MIA has been able to secure partial funding for selected projects under the EU TEN-T programme, including most recently, the complete re-construction of the two the airport’s taxiways.

On top of its participation in SMAG (ACI EUROPE’s Small and Medium Sized Airport Action Group), MIA also has an established presence in the ACI EUROPE Environmental Strategy Committee; Dalmas explained that the airport “believes its contribution promotes higher recognition of small airport issues in the development of aviation environmental policy by ACI EUROPE”.

The airport is presently participating in the development of the ACI EUROPE Airport Carbon Accreditation Scheme. As part of the Annual Assembly’s unanimous resolution to reduce their carbon emissions, taken in Paris last June, ACI EUROPE has made a commitment, to provide its member airports with a carbon accreditation scheme. The proposed scheme will enable airports to implement carbon management processes and gain public recognition of their achievements through the attainment of accreditation at different scheme levels. “MIA is participating at the entry point to the pilot scheme which recognises that an airport is quantifying its carbon footprint,” said Dalmas. “Our aspiration is to eventually achieve accreditation within Level 2 of the scheme, where the company will have to demonstrate its commitment to a carbon management plan with defined targets for incremental reductions in its carbon footprint.”

Airports may voluntarily progress to the highest level of recognition, which is awarded to those that have actively adopted carbon management measures and developed an engagement plan to guide or influence the emissions of stakeholders. A further award exists for those airports achieving carbon neutrality through reduced emissions as a priority, complimented by carbon offsetting of any residual emissions.

Environmental management at MIA is heavily influenced by the operating structure controlling or influencing landside and airside operations, as well as business processes, infrastructural constraints and the company’s corporate social responsibilities. “Core environmental processes are understandably driven by State legislation and aviation-related EU directives and regulations. In MIA’s case, however, obligations for legislative compliance are frequently complemented by scope for voluntary initiatives where legislation is capped to exclude small airports, typically those with less than 50,000 movements per annum,” said Dalmas.

MIA’s environmental strategy is consequently one of sustaining incremental improvement beyond responsibility for compliance – “namely one which remains sensitive to business constraints, but strives to inspire benefit from those opportunities available,” said Dalmas.

Within the airport’s operating scenario, high profile issues such as airport generated noise have been successfully managed, based on a balanced methodology; this methodology works due to the number of aircraft movements (currently 40,000 per year), while acceptance of airport activities by the neighbouring community is another significant contributing factor. “In spite of the fact that a number of neighbouring communities are located well within a one kilometre radius of the airport’s perimeter, the number of noise related complaints is low. Noise abatement measures relating to aircraft arrival and departure routes, aircraft engine noise limitations and historically low night-time operations have so far proved sufficient to mitigate against noise nuisances from airport activity,” said Dalmas.

Nevertheless, an airport noise mitigation plan is currently being prepared, which will take into account new challenges associated with a forecast expansion of operations.

Emission levels are another priority – they are monitored by the Maltese State through the Malta Environmental and Planning Authority. “The specific contribution to harmful emissions by airport activities has yet to be determined, but state-wide air quality measurements so far place emission hotspots within areas outside the immediate influence of the airport. The geographical location of the airport and prevailing meteorological conditions tend to support these findings,” said Dalmas.

Significantly, close to 57% of aircraft movements at MIA are by the national carrier, Air Malta, which operates a practically new, fuel-efficient fleet of Airbus aircraft.

Malta International Airport maintains a leading presence within Maltese society, actively supporting Malta’s culture, sports activities and more pertinently, environmental initiatives. To this end, MIA believes that the company’s environmental vision must extend beyond its organisational borders, providing sponsorship for environmental education projects and other related national events. In another initiative, MIA has for many years offered a substantial part of its airside green area for production of silage by a local cooperative of milk producers. Most of the costs for supervision and airside coordination of cultivation and harvesting activities are absorbed by the airport.

The work MIA is undertaking to minimise noise disturbance and emission levels, and its participation in the pilot phase of the ACI EUROPE Airport Carbon Accreditation Scheme, are tangible examples of its commitment to environmental management.

MIA is also exploring ways to diversify its energy profile to one which includes renewable energy sources, of which solar technology offers the best potential due to the Maltese Islands’ location within the central Mediterranean.