Environmental strategy is understandably an area under increasing scrutiny in the UK, where aviation has a high profile in the media. The reputation, size and location of London-Stansted arguably places it in the eye of the storm. Like many of its European peers, the airport is already quite advanced in its environmental strategy and the scope of its activities. Indeed, it warmly welcomed the unanimously adopted environmental resolution at this year’s ACI EUROPE annual assembly in Paris, in which all member airports committed to reducing their carbon emissions, with the ultimate goal of becoming carbon neutral. 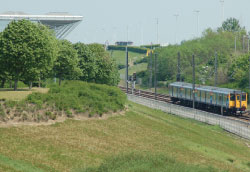 Jefferson: “44% of passengers coming to this airport do so on public transport, which places us ahead of other UK airports. We have developed an effective transport forum and are getting positive feedback from the local community and stakeholders.”

In the four years that London-Stansted has received the international standard for environmental management – the largest airport in the UK currently to do so, Jefferson believes it has been an effective tool for understanding what an EMS means, gaining clarity on what constitutes an environmental risk, as well as resolving differences of opinion about who is responsible for each airport function. As Jefferson points out, this can only be achieved through industry collaboration. “ISO14001 has helped us to get to the root cause of some of the environmental risks and resolve them, has helped us raise awareness and how we can move forward with a shared ownership,” he explained. “It has been a learning curve and there are situations where we have had to review and reprioritise asset replacement, such as improving and upgrading our monitoring systems for oil and chemical storage – driven through asset management and awareness raising. It’s about being able to demonstrate our role as a robust regulator of risk.”

Work around energy management and efficiency of use across London-Stansted’s assets will continue into 2009, added Jefferson.

Managing corporate responsibility through collaborative initiatives across the industry has been a core strategy for ensuring the airport achieves the objectives set out within the report’s core areas: air quality, biodiversity, climate change and energy, waste and water.

Last year Stansted began a preliminary internal study to identify the breakdown of carbon emissions at the airport – an attempt to better understand and quantify the main sources of greenhouse gas emissions. “This year we spent a lot of time looking at this in more detail. As an airport authority we have an influence and a partial responsibility to look at how we can work with our business partners to reduce the size of emissions,” said Jefferson.

Specifically, the study identifies air emissions, surface and vehicle emissions and energy consumption as the key target areas, with a final carbon footprint report expected to be published in March 2009, detailing a breakdown of carbon emissions. “It’s a useful tool for us and I want to use that information to challenge our business partners and BAA to reduce that,” he added.

As well as its commitment to environmental research, London-Stansted has been actively involved in reducing ground emissions and noise through a series of environmental initiatives with airlines. Working with fixed electrical ground power to operate aircraft cockpit systems on the ground has been a growing project throughout 2008. London-Stansted is leading the way for encouraging FEGP use – beginning with easyJet and extending to other airlines, including Air Berlin and germanwings. 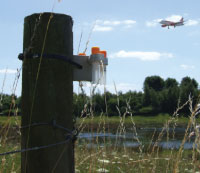 Furthermore, a team from London-Stansted identified a problem with the Boeing 737 connection point where the FEGP is attached – which has since been revised following a technical workshop with Boeing. The project’s success will lead to improved efficiency of FEGP on 737s across the industry. “There will be a roll-out on new 737s from March next year and we are really proud to have been involved in the process, as there’s much less use of APU’s, meaning an overall reduction in CO2 emissions,” said Jefferson.

London-Stansted has also been trialling other airport operating procedures, including single engine taxiing with easyJet, during longer taxis. “Following preliminary information, it’s looking to save 40% of taxi fuel for easyJet and we are looking to do this on a wider basis with other 737 aircraft,” said Jefferson. “We will continue to target aircraft emissions, including single engine taxiing work, as well as reducing taxi congestion to ensure sustainable travel solutions.”

Improving air quality is also on the agenda; London-Stansted will be reviewing its measuring and monitoring programme into 2009 and working around the effects of air pollution.

Airport growth is being challenged by the impact of CO2 emissions on the climate. While airlines are directly responsible for aircraft CO2 emissions, airports have to deal with the issues locally – with communities, environmental pressure groups, regulatory authorities and other stakeholders.

To be ready to support a growth strategy, airports must understand the volume of CO2 emissions, the major contributors, measure and demonstrate the effect of reduction strategies and deliver credible reporting to airport stakeholders. Quantifying major areas of contribution helps airports develop strategies to increase efficiency and reduce emissions.

Unless an airport can clearly demonstrate it is doing everything possible to reduce its impact on climate change, it will be unable to convince stakeholders to support expansion plans that directly conflict with national greenhouse gas reduction strategies.

Airports are beginning to understand that unless they understand and report aircraft emissions, they will be in the same situation as with noise – aircraft make noise, not airports, but it is airports that must deal with the community reaction and manage the impact. CO2 and other emissions are no different. Airports are now beginning investment in Carbon Assessment tools to use alongside other environmental programmes to manage and improve their environmental capacity.

London-Stansted’s £50 million terminal extension, which opened in July, with later phases being opened in December to include new shops and improved waiting areas, is expected to be carbon neutral. A newly installed wood-chip biomass boiler will provide the heat and energy needs of the terminal and uses renewable energy sourced from sustainable forests sourced within 20 miles of the airport, explained Jefferson. “Before, we had 5MW gas boilers and we are now able to turn one off, which will save us CO2 and represent a saving on our gas consumption, putting us in a strong position in managing carbon emissions.”

The biomass boiler is expected to meet the improved climate change targets set out in London-Stansted’s corporate responsibility report. “Our target is to reduce our gas emissions by 25% which will be achieved through the biomass boiler,” said Jefferson.

Widely recognised as a significant contributor to an airport’s greenhouse gas emissions, the environmental impact of surface access has been greatly reduced at London-Stansted through infrastructure projects and engaging in effective dialogue with the local community.

“44% of passengers coming to this airport do so on public transport, which places us ahead of other UK airports. We have developed an effective transport forum and are getting positive feedback from the local community and stakeholders – 600 coach journeys arrive and depart from our coach station every day and we’re finding local people using it as a transport hub for them,” said Jefferson. “We are doing a lot of work with National Express and ensuring we maintain the variety of connections the Stansted Express offers to London.”

Identifying wider concerns and taking direct action is a priority for Jefferson, who reinforces the benefits that liaison with both industry and local groups is having in improving environmental performance at the airport. “For me it’s important we have tangible pieces of work to reduce the immediate and longer-term impact on the environment – listening to stakeholder concerns and demonstrating you can do something about it today, to secure growth,” said Jefferson. “We can sometimes be perceived by the local community to be responsible for everything. The challenge lies around how we engage with our industry partners and work with them to share those responsibilities.”

London Luton’s investment in diesel versions of the COBUS 3000 buses in May is described as an environmentally efficient solution for passenger transportation on the apron.

“We no longer take like-for-like and look for vehicles with the lowest emissions. We have embarked on an ongoing replacement programme airside, with a view to replacing the entire fleet within the next few years,” said Gary Clark, London Luton’s transport manager.

The COBUS 3000 has a EURO 5 specification engine – the most advanced exhaust emission standard and is well-designed for apron use due to its small engine, which can cope with low speeds, added Clark.

Almost 87% of the COBUS is made from recyclable materials, including aluminium, plastic, steel, glass and rubber, with extremely low fuel consumption.

The COBUS EURO 5, which operates between London Luton’s terminal and aircraft have received positive feedback from passengers for being user-friendly. The buses are designed for airport use and there is easy access for the elderly, wheelchair users and families with pushchairs, explained Jo-Ann Lloyd, London Luton’s marketing manager.