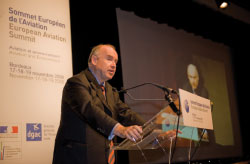 On the EU ETS, French State Secretary for Transport Dominique Bussereau concluded that the inclusion of aviation in the mechanism is essential if ambitious aims for pollution reduction are to be achieved.

The Summit gathered EU and national policy makers, regulators and industry stakeholders, including airlines, airports – represented by ACI EUROPE, business aviation, manufacturers and NGOs (non-governmental organisations); the overriding objective of the summit was effective management of the environmental impact of airport transport. There were three key themes on the agenda: The role of research in making aviation more sustainable; expected benefits from the modernisation of ATM with a focus on new policy and regulatory package proposed by the European Commission aimed at re-launching the Single European Sky (SES II); and operational and regulatory measures, including the role of airports and the EU Emissions Trading Scheme (ETS).

The event was punctuated by the signing of two major European agreements:

In his opening speech, European Commission Vice-President Antonio Tajani stressed the fact that air traffic will continue to grow in the long-term despite the unfavourable economic conditions of the moment. He urged a global approach to the environmental/climate change issue and a combination of technological, operational and economic measures. Tajani’s current priority is SES II; he referred to the cost of fragmentation in the sky and stressed the need to implement FABs by 2012 and the important role of the network manager provided by SES II. “Under the present conditions, we have no alternative but to implement SES II and achieve an effective Single European Sky” he said.

ACI EUROPE Director General Olivier Jankovec participated in the panel on the role of airports in addressing the environmental impact of aviation. Airports have a long-standing commitment and track record on the environment, with a focus on local issues such as noise, air quality, water management and biodiversity. Jankovec stressed that these issues will not go away, particularly noise. Airports have been proactive in addressing these not only through operational procedures, but also through innovative deterrents – many have introduced noise and/or NOx emissions-related charges.

Europe’s airports have not shied away from the environmental debate, having enacted a wide-ranging suite of diverse environmental management activities, as well as unanimously committing to reduce their carbon emissions, with the ultimate goal of becoming carbon neutral, at this year’s ACI EUROPE Annual Assembly in Paris.

Jankovec also explained that ACI EUROPE sees great benefits from SES II and the full integration of airports into ATM, based on a total system approach; this will allow further improvement in the use of existing capacity and reduce congestion. ACI EUROPE and EUROCONTROL recently signed a wide-ranging cooperative agreement designed to address these challenges. “Beyond this, there is a clear need to align airport and ATM capacity objectives and address the airport capacity crunch – this now needs to be addressed both at national and at EU level,” said Jankovec.

A strong signal was sent by the industry – by the airlines in particular – that reopening discussions and reconsidering the political agreement reached last summer regarding conditions for the inclusion of aviation in the EU ETS is simply unacceptable. Jean-Cyril Spinetta, Chairman, Air France-KLM, delivered a forthright speech, stressing the need for a realistic and effective ETS; the inclusion of aviation in the ETS must be “equitable, progressive and global,” he said. His contention is that the debate cannot be disconnected from economic reality – he believes oil will in the medium term stabilise at US$100 a barrel. Spinetta was adamant that if the ETS is to go forward, it has to be compatible with airlines’ investment capabilities for fleet renewal. Policy at EU level should, he said, incentivise action and allow those concerned to be in a position to act. “We need a progressive ETS allowing and incentivising the industry to get adapted, especially at a time when there is so much instability on the cost side,” he said. 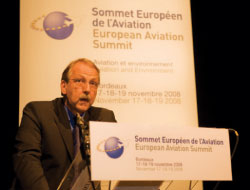 Ruete referred to efforts made by the industry towards improved sustainability, specifically mentioning the ACI EUROPE Airport Carbon Accreditation Scheme, which is currently under development.

Many of Spinetta’s points were echoed by the speech of Matthias Ruete, Director General, DG TREN, when he took the podium – he is in favour of retaining the political agreement reached last summer and not revising the terms of the inclusion of aviation through the revision of the general Directive. Ruete also referred to efforts made by the industry towards improved sustainability, specifically mentioning the ACI EUROPE Airport Carbon Accreditation Scheme, which is currently under development.

Significantly, all were in agreement about the need for the Council and the European Parliament to endorse the SES II package as proposed by the European Commission; the French Presidency wants to make quick progress on SES II. On the EU ETS, French State Secretary for Transport Dominique Bussereau concluded that the inclusion of aviation in the mechanism is essential if ambitious aims for pollution reduction are to be achieved. “The European Union’s objective is now to persuade all the Member States of the International Civil Aviation Organization (ICAO) to adopt this mechanism at a global level and to ensure that it does not threaten the fragile economic balance of the air transport sector,” he said.

While the aviation sector has several challenges ahead, notably the economy, energy and the environment, Bussereau concluded that “the progress of European programmes make me confident in Europe’s ability to meet these challenges”.

The trend for privatisation showing no sign of slowing in Europe, along with the increasing airport competition in Europe, has many publicly-owned airports reviewing their business strategies, seeking the best ways to remain competitive and attract new traffic. ANA, Aeroportos de Portugal, currently ensconced in the construction of a brand new airport for Lisbon, have recently sponsored the publication of a new report by Rita Sousa Uva, their adviser for regulation and international affairs in ANA’s Strategy and Airport Marketing department. The study, entitled European Community State Aid Policy for Public Airports: Reality versus Law? offers a critical perspective of the current EU legal framework for publicly owned airports. If you are interested in this publication, ACI EUROPE has a handful of copies, to be distributed on a first-come, first-served basis.

Such perspective becomes even more interesting in light of the recent ruling by the Court of First Instance of the European Communities, which on 17 December 2008, annulled the landmark European Commission decision on the so-called Charleroi airport case (aid granted by the Walloon Region and by Brussels South Charleroi airport to Ryanair). Indeed, the decision laid the foundations for the EC guidelines on State Aid in the airport sector including aid granted for the start-up of new routes from regional airports. Airport Business will bring you more on these developments in the next issue!