The Venice Master Plan was presented to the European Parliament in September under the patronage of Paolo Costa, Transport Committee Chairman, and in the presence of Antonio Tajani, EU Transport Commissioner; Giancarlo Galan, Governor of Venice Region, and several MEPs. 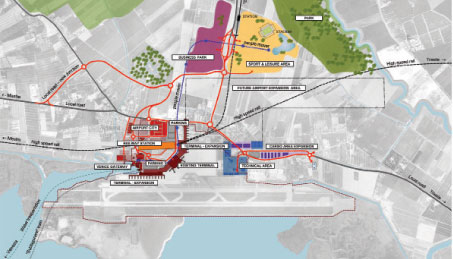 As of December a new by-pass will be inaugurated, making the airport more easily accessible and increasing its catchment area. Other developments such as a new stadium, convention centre and casino will be constructed by 2015.

The airport faces a waterfront lagoon with a recently-built terminal and supporting infrastructure. It makes use of a waterway access point to ensure rapid connection with the historic city centre and with the smaller islands; it also feeds into the surrounding highway system and local road network. “Our strategy is rendered easier to implement thanks to changes to the infrastructure around the terminal. As of December a new by-pass will be inaugurated that will render the airport extremely accessible further enlarging our catchment area. The ‘Quadrante di Tessera’ shall also provide a wide range of complementary developments and facilities which will be constructed by 2015,” said Enrico Marchi, SAVE Chairman.

The evolution of Venice Marco Polo is taking place with an emphasis on long-term planning and shared decision-making. The expansion plan, both in the medium and long term, has been agreed with the Municipality of Venice.

The challenging Master Plan will involve significant organisational and financial commitments over the next few years, for which a co-financing agreement has been initiated with regards to resources to be made available through European Union policies for TEN-T networks.

The principal elements of the new Master Plan establish planning on a long-term programme that is achievable on a gradual basis and in harmony with the surrounding area as a function of its needs. The intention is economic sustainability of investments, with particular attention focused towards land conservation, reduced energy consumption and low management costs.

Naturally, environmental responsibility is high on the agenda. “Being within the Venetian lagoon, which is an area that absolutely has to be preserved, the number of permits and commissions that have a say on the construction and development of the plan is exponentially higher than if we had been located in the middle of a plain. The bureaucratic road to achieving all the green lights is much longer and quite tortuous,” said Marchi.

Besides future developments for the airport and railway terminals, it includes a new stadium, a new casino, a business park and a large park that will surround the new infrastructure area. Additionally, the ‘Venice Gateway’ project, created by renowned architect Frank O. Gehry, will be an important element of the new development phase. It will include a hotel complex, a conference centre and a water transport terminal.

The entire design represents an extraordinary opportunity to reinforce all networks and service accessibility in North East Italy, as well as responding to the need for development of air and inter-modal transportation in Italy. “In terms of traffic development the strategy continues to focus on turning Venice into the preferred gateway into the North East of Italy for intercontinental flights – growing our Delta base to New York and Atlanta, US Airways to Philadelphia and Emirates to Dubai, thereby increasing the accessibility of Venice to the world,” said Marchi. “Furthermore, we are focusing as well on maintaining the right balance between point-to-point low-cost carriers and traditional services from regional hubs.”