Geneva International Airport is currently implementing its 2008-2010 Environmental Plan. Mounier explained that the Plan’s ambitious objectives towards noise levels and local air quality are GVA’s biggest environmental challenges. “We are focusing on the reduction of noise levels connected with airport operations with a view to systematically reducing the number of people exposed to such disturbances in the immediate urban surroundings. To this end, the range of incentives and restrictive measures put in place by GVA is supported by the gradual modernisation of aircraft used by airlines flying to and from the airport,” he said. “The air quality challenge is addressed through a wide range of measures, aimed at airport access (by both employees and passengers), energy use, vehicle fleet and aircraft (surcharge on gaseous emissions).”

Following a study carried out jointly with the Consultative Committee for Action to Control Air Traffic Disturbances (CCLNTA), GVA introduced additional regulations in April 2008, requiring airlines to exercise restraint when planning flights during the night.

Residential Soundproofing is a key environmental initiative currently being pursued. In addition to incentives and restrictive measures, the airport has, since 2003, conducted a soundproofing programme for local residents. By the end of 2007, GVA had insulated more than 800 residences on Swiss territory and financed work costing more than CHF12 million (€8 million). “This programme will continue on a voluntary basis in communities close to the airport on both sides of the border. Between now and 2010, the work programme will be strengthened and more than 1,000 additional residences in Switzerland and France will benefit from noise insulation,” said Mounier. 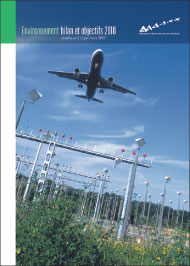 For a number of years now, a noise surcharge has encouraged airlines to operate with quieter aircraft. Swiss legislation restricts commercial flights to and from Geneva and prohibits non-commercial flights between 22:00 and 06:00. Following a study carried out jointly with the Consultative Committee for Action to Control Air Traffic Disturbances (CCLNTA), GVA introduced additional rules in April 2008, requiring airlines to exercise restraint when planning flights during the night. These regulations include an increase in the noise surcharge for take-offs between 22:00 and 06:00. GVA is also conducting a cost-benefit analysis of the result of introducing additional operating restrictions during the night. In 2007, movements between 22:00 and 06:00 represented just 4.7% of the total.

The second of the two principal environmental challenges – air quality – has seen a surcharge on gaseous emissions levied on airlines since 1998 in an effort to encourage them to fly to and from GVA with their least polluting aircraft. Aircraft are divided into classes – five categories for jets, another five for turboshaft and piston engines – according to their emission factor. Revenue is paid into the airport’s ‘Environment Fund’ and assigned to the financing of further environmental management measures.

GVA itself is also modernising its vehicle fleet; it has had a clearly defined ‘green’ vehicle purchasing policy since 2006. Particle emissions filters are gradually being installed on passenger buses and trucks and GVA also requires the use of machines equipped with particle emissions filters on its work sites. From this year, diesel distributed at the airport has included 5% bio-diesel, produced in Switzerland. “Also, a range of measures aimed at reducing pollution emitted by all vehicles driven on the tarmac – more than 800 vehicles – is planned over the coming years. This is intended to encourage third parties operating at the airport to modernise their vehicle fleets by actions such as anti-pollution controls, compliance with the most rigorous standards in force for the acquisition of new vehicles, and the application of a differentiated charge according to environmental performance,” said Mounier. 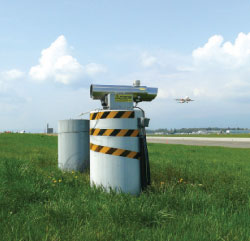 The surcharge on gaseous emissions has been levied on airlines since 1998 in an effort to encourage them to fly to and from Geneva with their least polluting aircraft.

As a result of the ‘mobility plan of airport personnel’, airport employees are able to benefit from reduced-price tickets on public transport and the use of a free shuttle service which operates early in the morning and late at night. “Non-motorised transport is encouraged by appropriate infrastructures and promotional campaigns.

Car park passes are allocated to airport employees according to strict criteria and prices are gradually being increased. The result of these measures is encouraging and points to an increase in the usage rate of sustainable modes of transport,” said Mounier.

GVA has also encouraged the use of public transport by passengers through proposing a range of innovative offers. In particular, passengers arriving at the airport can use buses, trams, trains and boats in Geneva free of charge for 80 minutes. “Measures and incentives aimed at airport personnel and airline passengers will be reinforced and extended over the coming years, in particular by developing car pooling and improving pedestrian paths and cycle routes,” said Mounier.

GVA and seven Geneva-based partners signed an agreement with the Swiss Confederation, under the aegis of the Energy Agency for the Economy (AEnEC). This allows the airport to pool the definition of appropriate measures to reduce the consumption of fossil energies.

GVA was one of more than 300 airports to sign up to the industry Declaration on climate change at the ATAG Aviation & Environment Summit. “Energy efficient operations are implemented with regard to ground operations and airport infrastructure management. With this aim, GVA and seven Geneva-based partners signed an agreement with the Swiss Confederation, under the aegis of the Energy Agency for the Economy (AEnEC). This allows us to pool the definition of appropriate measures to reduce the consumption of fossil energies,” said Mounier.

The airport is being notably proactive in reducing its overall energy footprint, with efficient insulation of new buildings and updating of equipment with more efficient replacements. An energy concept, planned for 2009, will give a long-term vision to the changing energy requirements of the airport’s buildings. It will target greater restraint in the use of energy and better integration of renewable energy sources for the heating or cooling of buildings.

Mounier welcomed the resolution agreed at the ACI EUROPE Annual Assembly in June, under which Europe’s airports have committed to reduce carbon emissions with the ultimate goal of becoming carbon neutral. He believes European-wide plans are needed, particular in order to define application parameters and evaluation standards.

GVA’s efforts in reducing carbon emissions are focused on the reduction of energy consumption. This is achieved by improving building efficiency and furniture. The airport recognises the need for less reliance on fossil fuels and aims to address this with a focus on electricity consumption. Fixed ground power supply systems, providing a direct supply of electricity and preconditioned air to parked aircraft, have been progressively installed since 2004. They have resulted in an annual emissions saving of more than 20,000 tonnes of carbon dioxide.

“The potential for reduced energy consumption on the part of tenants and holders of concessions of airport premises was analysed in 2007. Users will be encouraged to take steps to reduce their consumption by bearing the real cost of energy according to the ‘consumer pays’ principle as of 2009. The possibility to buy certified renewable electricity is offered to all airport partners,” said Mounier. 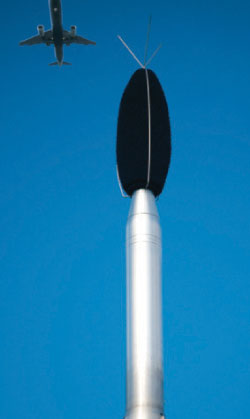 For a number of years now, a noise surcharge has encouraged airlines to operate with quieter aircraft. Swiss legislation restricts commercial flights to and from Geneva and prohibits non-commercial flights between 22:00 and 06:00.

Water and waste management are also key elements of the Environmental Plan. Waste management efforts are focused on the promotion of sorting and recycling. Initiatives as simple as the sorting of paper (newspapers and magazines) onboard aircraft can make all the difference. This particular initiative is supported by the two main companies responsible for aircraft cleaning at GVA. The target is that, by 2010, 35% of the waste produced at the airport site will be recycled and facilities are in place to help achieve this. Waste collection centres are available for selective collection, including paper, cardboard, PET, glass, tyres, wood, scrap metal, plastics, aluminium, and electronic equipment. The operating costs are shared between companies which make use of the services according to the ‘polluter pays’ principle.

Alongside this, a Drainage Master Plan, which is a management and planning tool for the drainage system of the airport, is being drawn up. The aims of this are to provide a detailed report on the condition of the existing pipes, to ensure compliance with legal requirements and ensure that the new pipes can cope with future airport development. All aircraft parking places are currently protected against the accidental spillage of hydrocarbons.

The myriad environmental initiatives underway at GVA underline its commitment to environmental protection and sustainability. While the biggest challenges are identified as noise levels and local air quality, with initiatives underway in both areas, significant progress is also being made in terms of water and waste management, energy management and protection of the natural environment. Europe’s airports are widely recognising their environmental obligations and GVA is among those leading the way. Much progress has already been made and that will continue in order to achieve the ambitious objectives set for the period to 2010.