SMAG engaging with the regions on a European scale 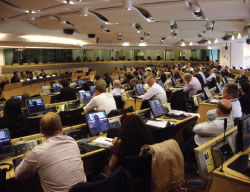 ACI EUROPE and ARC’s joint workshop entitled The Regional Airports’ response to the Environmental Challenge, was very well-attended, a testament to both the socio-economic significance that European regions place on airports and the prescience of the environmental theme. The workshop was preceded by the 8th Meeting of SMAG the previous day.

As recent ACI EUROPE Airport Traffic Reports attest, there is still growth in some European regions, even in these trying economic and financial times. Clearly, Europe’s regions present a wealth of diverse economic opportunities. Naturally, these opportunities count on strong relations between the public and private sector, in order to bring about fruitful, genuinely collaborative partnerships that in turn boost the economic and social well-being of those regions. Regional airports are a vital determinant in such projects, connecting regions to the rest of Europe and beyond, in some cases.

The Investors’ Café section of Open Days, is where a board range of stakeholders: public and private companies, regional and local authorities, SMEs, financiers, politicians and decision-makers meets socially and helps develop and nurture critical contacts and discussion. This year’s Investors’ Café attracted some 4,000 participants from all over the EU-27.

As part of ‘the Investors’ Café’ section, ACI EUROPE and ARC’s joint workshop entitled The Regional Airports’ response to the Environmental Challenge, was very well-attended, a testament to both the socio-economic significance that European regions place on airports and the prescience of the environmental theme – climate change is both global and local.

As part of her introduction, Leonie Dobbie highlighted the diverse range of environmental concerns already under analysis and migitation at European airports, including noise, local air quality, ground and surface water and soil quality, recycling and sustainability and habitat and wildlife management. She went on to point out how the importance of climate change varies amongst the European regions and the emission inventory methodology has not yet been standardised (a vital impetus in ACI EUROPE and WSP Environmental’s current development of the Airport Carbon Accreditation Scheme that is to be delivered mid-2009 as part of ACI EUROPE’s Paris resolution committing European airports to carbon reduction, with the ultimate goal of carbon neutrality). 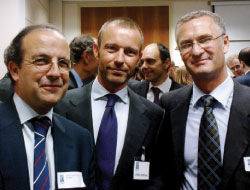 LFV is one of the airport groups at the forefront of the environmental issue, having becoming carbon neutral since 2006. Hazze Sandström entered into the environmental details of his airport – pointing out the multitude of emissions sources that meet at the airport. Extensive emissions analysis at Jönköping Airport yielded the following data: 96% of the CO2 emissions within the airports operations are due passenger transportation on the ground and to/ from airport. The remaining 4% can be attributed to the airport’s own emissions, breaking down as follows: 3% fire fighting drills, 12% business trips by airport employees, 45% vehicles, 40% electricity and heating. He went on to detail the ways in which the airport successfully reduced its emissions by 67% in the period 2003-2007, as well as an Energy project under way since 2005 that has the following ambitions targets to achieve by 2010: 30% reduction in electricity consumption, 35% reduction in heating consumption and finally, 50% reduction of remaining CO2 emissions.

David Bishop, AOA, emphasised the fact that aviation is a collection of interrelated sectors and hence, requires real cross-sectoral cooperation, across the spectrum of airport services: ATM, ground operations, surface access to the airport and energy usage in airport buildings. Regarding the way forward, Bishop said that aviation’s environmental profile features significantly in the minds of the public and that airports must be at the frontline of changes in activity and perception, if they are to maintain a license to grow. The issue of noise, rather than climate change, was highlighted as the primary concern of those living within the surrounding area of the airport.

Sergi Alegre Calero of ARC then presented a concept called Qlair: Quality of life in airport regions: towards a level playing field in airport regions. The Qlair project has identified common key elements for improved quality of life in airport regions and their relation to national and regional governance structures in European countries. These range from improved information and communication with citizens (Aéroports de Paris) to inclusion of ground noise in airport nuisance reduction policies (Amsterdam Schiphol), as well as innovative projects on the impact of ATM on special planning (NATS). Long term, Qlair prescribes: optimal land use strategies (eg. Dublin Airport), flexibility in noise reduction areas (eg. Fraport) and investment in public facilities in noise restricted areas. 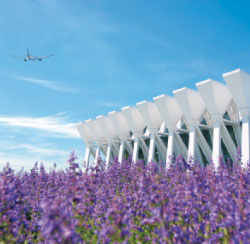 This was followed by a glimpse of the future in ‘How will air transport look in 10 years’ time’, the presentation by Benoît Brunot of VINCI Airports.

In summarising the session, Ronny Rohart, European Commission, pointed out that all the panelists agreed on how regional policy should ensure harmony between the regional and airport policy. The urgency of moving airports and communities towards more environmentally viable (sustainable) policies was also a common goal, coupled with the communications challenge of changing the perception of airport environmental behaviour.

Given the relevance of regional policy to SMAG, the ACI EUROPE & ARC joint workshop was preceded by the 8th Meeting of SMAG (Small & Medium Size Airports Action Group), which took place at ACI EUROPE’s offices the day before. Since its inception just two years ago, SMAG has gathered exceptional momentum – it now comprises some 140 members and the 2nd SMAG conference and exhibition is set to take place in Linz, Austria from 2-4 March next year.