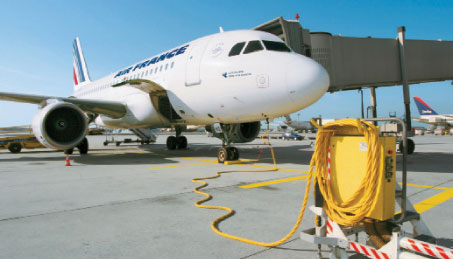 Proposals to offset emissions include removing diesel ground power units for aircraft. “We are aiming to have up to 100% on the aircraft stands with an electrical power supply,” said Dr Peter Marx, Fraport’s vice president of environmental management.

Fraport’s drive to reduce CO2 emissions will be achieved through the climate protection programme, with a series of measures designed to ensure future growth is achieved within environmentally sustainable means. It is approaching its environmental responsibilities with confidence and vigour. Marx said: “We have two strategic targets to fulfil in the next 12 years. The first target is to decrease CO2 emissions by 30% per traffic unit by 2020 – that’s a decrease from 3.6kg to 2.5kg per traffic unit.”

Frankfurt airport is currently in the early stages of a major expansion programme, with plans to open a new ‘eco’ terminal and runway in the next five years. The projects are expected to boost current capacity of around 54 million passengers every year, by a further 25 million. The additional runway will mark the first phase of development, with construction beginning next year.

According to Marx, the second target for the climate change protection programme will be to effectively reduce emissions in the construction of the new Terminal 3, in a carbon neutral way. “We are striving to cut down our emissions in our infrastructure and at the apron, which are under our direct control, but the second target is making the extension of the airport infrastructure carbon neutral – the energy we use should not lead to higher emissions,” Marx said. 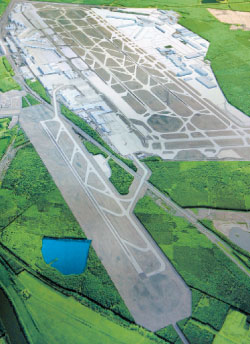 Frankfurt airport is currently in the early stages of a major expansion programme, with plans to open a new ‘eco’ terminal and runway in the next five years. The additional runway will mark the first phase of development, with construction beginning next year.

Installing more energy-efficient heating and lighting in the office and service buildings over the next 12 years will also contribute to greater savings. Other proposals to offset emissions include removing diesel ground power units for aircraft, said Marx. “We are aiming to have up to 100% on the aircraft stands with an electrical power supply. For our new terminal, we have plans to use alternative fuels. We want to produce our own heating and electricity and we need a big investment project to achieve this.”

The estimated cost of the project will be between €30 million and €40 million, said Marx. He assured that “careful investment” will be made into environmental research, as the project will involve digging 3,000m into the ground to ensure enough energy is produced to sustain the airport’s needs. Fraport currently has a permit for hydropower until 2012 – a further step towards cutting carbon emissions to proposed 2020 levels.

Sustaining environmental efficiency also depends on wider participation both airside and landside, admitted Marx. “One of the biggest challenges is to commit the whole community to being more responsible. We are starting a campaign to include other partners on whom we have only influence, as well as with the cargo handlers to continue to reduce the footprint at the airport. With a total of 70,000 airport staff, we have a huge possibility to reduce energy in the workplace through a training programme which we are aiming to deliver,” said Marx.