The Declaration, which was signed by more than 300 airports worldwide, brought together all sectors of commercial aviation – aircraft manufacturers, airlines, airports, air traffic control and engine manufacturers. It outlines the concept of ‘carbon neutral growth’, with an aspirational goal of carbon-free flight. A four-pillar approach is being taken, comprising investment in new technology, increasing operational efficiency, air traffic and airport infrastructure improvements and appropriate economic measures.

The Declaration states: “We agree on the need to accelerate action to mitigate our environmental impact, especially in respect to climate change, while preserving our driving role in the sustainable development of our global society. Our efforts and commitment to work in partnership with governments, other industries and representatives of civil society will provide meaningful benefits on tackling climate change and other environmental challenges.”

Summit organiser Dr Philippe Rochat, Executive Director, ATAG, said: “The declaration is not just fine words. For the first time, the industry can agree on a set of common goals and a pathway to achieve those goals – through the industry’s four pillar strategy. This declaration sends a signal that we are devoting the same energy, investment and sheer determination to ensure the industry has a sustainable future.”

He described the Summit, which was organised by Air Transport Action Group (ATAG), ACI, Civil Air Navigation Services Organisation (CANSO), IATA and the International Coordinating Council of Aerospace Industries Associations (ICCAIA), as an historic event that opens a new page in aviation’s history. “It is the first time we have had so many aviation CEOs at the Summit, which shows our determination to act together,” said Rochat. Many of these CEOs addressed the Summit, such as Willie Walsh, CEO, British Airways; Tom Enders, President & CEO, Airbus; Scott Carson, President & CEO, Boeing Commercial Airplanes; and Dr Yiannis Paraschis, President of ACI EUROPE and CEO, Athens International Airport. 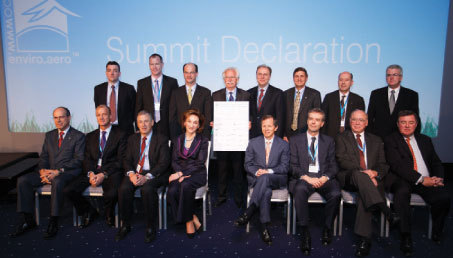 Industry leaders signed a Declaration on climate change, with a commitment to lead towards carbon neutral growth and a totally sustainable industry. Signed by more than 300 airports, it brought together all sectors of commercial aviation – aircraft manufacturers, airlines, airports, air traffic control and engine manufacturers.

Robert J. Aaronson, departing Director General of Airports Council International (ACI), addressed the event, highlighting the opportunities for airports in terms of emissions savings. He contended that the green airport of the future is in fact the airport of today. Environmental initiatives are underway at many airports – “What we don’t yet have is one airport bringing together all of the possible environmental initiatives to be a totally green airport. But we have a number that are approaching this objective. The point is that airports are employing a huge range of diverse and innovative environmental projects,” said Aaronson. “Carbon neutral airports are a reasonable and achievable goal. This has already been achieved by two airports – one in Sweden (Stockholm Arlanda) and one in New Zealand (Christchurch). 10 others are committed to carbon neutrality. In airport development, green is the new norm.”

Airports have long been proactively tackling their environmental impact across a number of areas, such as water quality, recycling, wildlife management, sustainable infrastructure development, land use zoning and in particular noise and local air quality. Aaronson argued that positive environmental decisions are also positive business choices. “It needn’t be hard – what it does require is a step-change towards placing environmental concerns at the very heart of corporate and infrastructure planning. The coordination on environmental programmes between the airport company, airline, ground handler, government agency and concessionaire should be standard practice at all airports and at every level of the aviation industry,” he said.

James C. Cherry, Chairman, ACI and President and CEO of Aéroports de Montréal, raised the need for airports to step up their efforts in working with their partners in local communities. “Airports face a wide range of environmental issues and increasing challenges. Climate change is going to take on an even higher profile. The Summit Declaration is a powerful call to action for the industry,” he said.

The Chicago O’Hare Modernisation Programme is a good example of the sustainable developments being undertaken by airports. Rosemarie Andolino, Executive Director, explained that the $8 billion (€5bn) programme to transform the parallel runway configuration will evolve into a benchmark for green initiatives on civil construction projects. A Sustainable Design Manual was developed to ensure appropriate sustainable design objectives. 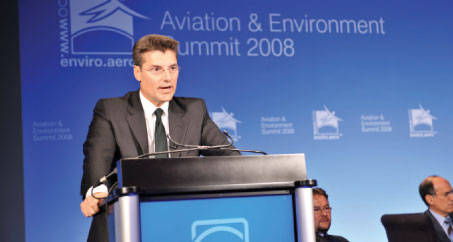 “Europe is facing a capacity crunch. Environmental restrictions already determine the capacity of most of the large airports in Europe. Increasingly, this is also spreading to regional airports,” said Yiannis Paraschis, CEO, Athens International Airport and ACI EUROPE President.

The increasing profile of climate change and aviation’s perceived environmental impact has heightened the need to effectively communicate the message that aviation is committed to the environment. Dr Yiannis Paraschis, President of ACI EUROPE and CEO, Athens International Airport, addressed the event, specifically on the issue of communication and spoke of the far-reaching repercussions that environmental pressures are having on aviation. “Europe is facing an airport capacity crunch. Environmental restrictions already determine the capacity of most of the large airports in Europe. Increasingly, this is also spreading to regional airports,” said Paraschis. “The decades old approach of airports individually addressing their environmental impact at local level is over now. Airports have to be collectively active on the environmental front and demonstrate environmental responsibility.”

ACI EUROPE is currently developing a programme, provisionally titled: the Green Airport Charter & Label, which is scheduled for roll-out in 2009 – it will be a European wide accreditation scheme allowing airports, on a voluntary basis, to follow a common framework for the measurement, reporting and reduction of carbon emissions with the possibility of becoming carbon neutral. “Airports are uniting, globalising and communicating their environmental strategies,” said Paraschis. “Aviation system collaboration in communicating is vital.”

A figure raised frequently throughout the Summit was that aviation contributes 2% of the world’s carbon emissions. Fernando Pinto, Chairman, IATA Board of Governors and CEO, TAP Portugal, referred to IPCC (Intergovernmental Panel on Climate Change) forecasts that, by 2050, that figure will grow from 2% to 3%. “That in itself is a great story. Our carbon footprint is small and it will continue to be small in the future,” he said. “There are some inaccurate, negative messages getting media coverage. The industry must work together on a global communications campaign – agree facts, figures and key messages.”

The enviro.aero initiative has an important role to play in correcting misunderstandings about the aviation industry and its environmental impact, as well as facilitating and supporting industry stakeholders in promoting their environmental responsibilities.

There was inevitably a strong focus on the development of carbon-free technology, the underlying message being that innovations in airframe and engine designs, allied with cleaner alternative fuels, could provide aviation with the means to become carbon neutral and eventually completely carbon-free.

The crucial role of technology in reducing emissions was addressed by several speakers. Giovanni Bisignani, Director General & CEO, IATA, outlined a target that by 2017, 10% of fuels used will be alternative fuels. “Fuel is 30% of an airline’s cost – $156 billion will be spent on fuel this year. No other industry has the same incentive to reduce fuel costs,” he said. “Technology is critical. Governments must cooperate to support and fund research. Our goal is zero carbon. The challenge is to develop carbon emission free technology in 50 years.”

A complete life-cycle approach needs to be taken, according to Tom Enders, President & CEO, Airbus. “It’s not just about environmentally-friendly products, it’s also the way we manufacture them,” he said. “The focus for us needs to be on innovation and technology.”

It was a sentiment echoed by Scott Carson, President & CEO, Boeing Commercial Airplanes. In February, Boeing, Virgin Atlantic and GE Aviation conducted the first commercial aviation flight using a sustainable biomass-to-liquid fuel mixed with traditional kerosene-based jet fuel. The demonstration was designed to highlight the technical feasibility of using biofuels in a commercial aircraft. “This is part of our work to unlock the market potential of alternative fuel sources for the industry. We’re also partnering with Air New Zealand and Continental Airlines on future demonstration flights, which will focus on sustainable, next-generation fuel sources,” said Carson.

For more information on the Summit, including downloads of some of the presentations, please go to: http://www.enviro.aero/summitpresentations.aspx