While aviation’s contribution to carbon emissions is relatively small (2% according to IPCC figures), the industry is not complacent. Enormous improvements have been made to the fuel efficiency of aircraft and IATA has set further ambitious targets to measure progress – 10% alternative fuels by 2017 and a 25% improvement in fuel efficiency by 2020 compared with 2005. Airports are also playing their part; two – Stockholm Arlanda and Christchurch, New Zealand – have already achieved carbon neutrality and several others are committed to doing so. 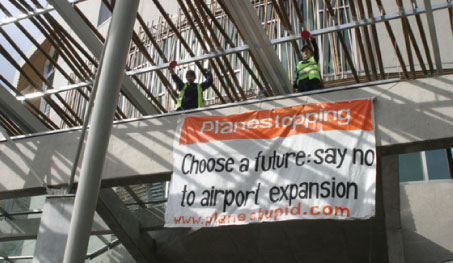 FlyingMatters has warned that without new runways in the UK more than half a million new jobs in the tourism sector would be lost. 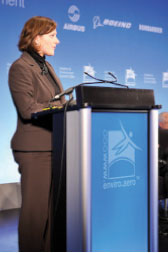 Director of FlyingMatters, Michelle Di Leo: “Our aim is to contribute to the debate in a way that gets a proportionate response from policy makers. Our members talk as one on social, economic and environmental issues. In communications terms, we try to give voice to a latent public support for aviation.”

“Our aim is to contribute to the debate in a way that gets a proportionate response from policy makers. Our members talk as one on social, economic and environmental issues,” said Di Leo. “In communications terms, we try to give voice to a latent public support for aviation.”

She highlighted the fact that FlyingMatters now has members who represent farmers in the developing world as being of particular significance in terms of the broad range of organisations interested in supporting the sustainable growth of aviation.

Importantly, FlyingMatters seeks to convey the social and economic benefits of aviation. In the UK, aviation supports more than 700,000 direct and indirect jobs and contributes nearly £11.5 billion (€14bn) to GDP. “The coalition believes that by telling our story more widely – reaching opinion formers and the general public through the media – a more balanced debate around aviation and the environment can take place which recognises aviation’s social and economic contribution,” said Di Leo. The environmental debate in the UK has become one of the most polemic of its kind – with climate change currently a favourite subject of the UK media.

Before the launch of FlyingMatters, the debate, she explained, was largely happening on the terms of those who oppose aviation. FlyingMatters effectively provides a ‘one stop shop’ for the media, highlighting the arguments in favour of aviation’s sustainable growth. “It provides a coordinated response to the media, so that a genuine debate can occur,” said Di Leo. “There is an almost permanent need to make the case for flying. The minute you stop engaging in the debate and think you have won is the moment that it runs away from you.” 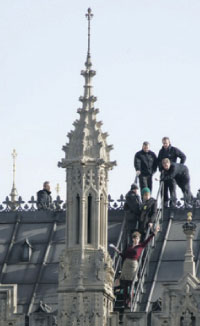 In February, campaigners against a third runway at London Heathrow demonstrated from the roof of the UK Houses of Parliament.

The debate has become more balanced, according to Di Leo. Since FlyingMatters became involved, the media has begun asking a lot more questions rather than simply accepting the arguments of those opposing aviation. A good example of this is reporting on the air freighting of fresh food. “There is now acknowledgement that there are two sides to the issue. It is a prime example of how we can rebalance the debate,” said Di Leo. She explained that a large proportion of goods that are air freighted to or from the UK travel in the belly hold of passenger aircraft rather than in dedicated aircraft, making it an efficient use of a flight which would already be taking place. Additionally, while the UK market is of critical importance to individual countries, only 5% of food in the UK arrives by air.

It is not the popular press/tabloids driving the debate in terms of anti-aviation groups, according to Di Leo. They are more interested in the consumer angle and are aware that people want to continue flying. The issue is rather being pushed by a small group of media channels. 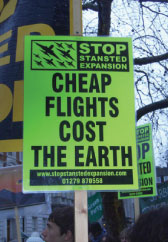 There have been numerous protests against the planned expansion of London Stansted, with a particular focus on the proposed second runway.

On the very day of our interview, the UK’s Guardian newspaper reported that the Sustainable Development Commission (SDC) had called on the UK Government to hold an independent review of its 2003 Aviation White Paper, claiming there are question marks over the environmental and economic arguments underpinning the proposals for UK airport expansion. “It is extremely disappointing that the SDC has taken what was participation in good faith by the industry to try to undermine government policy,” said Di Leo.

FlyingMatters has warned that without new runways in the UK more than half a million new jobs in the tourism sector would be lost. The number of international visitors to the UK is set to more than double to 82 million by 2030, by which time the Government expects to see three new runways in the UK – two in the South East and one in Scotland.

The anti-aviation campaigns in the UK have been noticeable for their sensationalist tactics and innovative use of the internet. Asked whether FlyingMatters feels that those who speak in favour of aviation could make better use of blogs and online social networking, Di Leo said: “We must make our case as creatively and effectively as possible. The audience for these things is fairly self-selecting – you have to be aware who you are talking to.”

Di Leo explained that there is unanimous agreement that aviation should cover the costs of its impact. She described emissions trading as the way to go in terms of carbon emissions. “When the science is in place on non-CO2 emissions, we need to have a debate on that too,” said Di Leo. “The European scheme is a key step in the direction of the ideal: a fully international scheme. We want to see this delivered in a way which encourages improved environmental performance in aviation and generates a positive response from the rest of the international community.”

Figures concerning aviation’s contribution to climate change tend to vary. What is the FlyingMatters strategy for addressing this? Di Leo described the debate about these figures as pretty sterile. “Those against aviation will continue to question the figures. From our point of view, the best approach is the take the figures of the world’s leading authority – the IPCC (Intergovernmental Panel on Climate Change),” she said.

Airports have been the battlegrounds for many of the recent protests by those opposing aviation; protestors used the opening of London Heathrow’s Terminal 5 as an opportunity to protest against both climate change and plans for a third runway at the airport, for example. “Direct action groups are always going to see disrupting airport operations as a way of getting their message across, but in the long-term, it doesn’t win them the support of the public – it doesn’t help their case,” said Di Leo.