Traffic at both Paris-CDG and Paris-Orly has grown steadily so far in 2008. Figures for Q1 show 2.5% growth year-on-year to a total of more than 27 million passengers – 18.7 million at Paris-CDG and 8.4 million at Paris-Orly. “Although oil prices have rapidly increased over the past few months, airport resources are rare in Europe and we have a robust and diversified economic model,” said Graff. 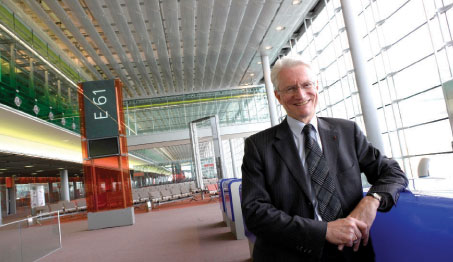 Graff: “Aéroports de Paris benefits from an undeniable competitive asset with four runways at Paris-CDG and three at Paris-Orly. Moreover, we have increased our capacity in the terminals by about 20 million passengers over the past two years. Our facilities are hence in line with our traffic.” 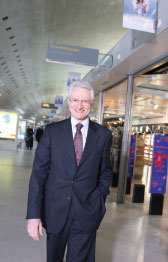 Graff: “Sustainable development is particularly close to my heart. Aéroports de Paris has already invested a great deal in this field. In 2007, we made seven new commitments with the Ministry of Ecology and Sustainable Development to produce cleaner energy, to consume more efficiently and to commute in a more responsible way.”

New facilities constructed as part of the €2.7 billion investment programme include the €645 million Satellite S3, which opened in June 2007 and was developed with the aim of reinforcing the Air France-KLM hub, as well as enhancing the overall competitiveness of Paris-CDG. The programme has also allowed the reconstruction of the Terminal 2E boarding pier, as well as the construction of the 2G regional terminal; these two facilities will complete the CDG2 hub.

Construction of the Satellite 4 extension to Terminal 2E has also already begun. The building will have the capacity to handle seven million passengers per year and will be used by members of the SkyTeam alliance. It will enter into service in 2012.

On the urgent matter of Europe’s airports facing a capacity crunch over the next 10 to 20 years, Graff is confident that Aéroports de Paris is in a strong position to avoid this. “Aéroports de Paris benefits from an undeniable competitive asset with four runways at Paris-CDG and three at Paris-Orly. Moreover, we have increased our capacity in the terminals by about 20 million passengers over the past two years. Our facilities are hence in line with our traffic. The upgrading and refurbishment works have substantially improved the quality of service offered to our passengers,” he said.

When Satellite 4 opens in 2012 the capacity at Paris-CDG will be around 81 million passengers per year, compared with 47 million in 2004. In the 12 months to April 2008 Paris-CDG handled 60.5 million passengers. “In brief, we benefit from a rather exceptional growth potential in Europe. We wish to make the most of this competitive asset,” said Graff.

Aéroports de Paris is committed to limiting, in all aspects, the environmental impact of its activities. Satellite S3 constituted a new advance towards the policy of High Environmental Quality (HEQ) that ADP is implementing for the regional terminal 2G, Terminal 2E and Satellite 4. ADP collaborated with Certivéa, a subsidiary of the CSTB (Centre Scientifique et Technique du Bâtiment), on the development of a specific HEQ standard for airport terminals, which will be the future benchmark for this type of building in France. 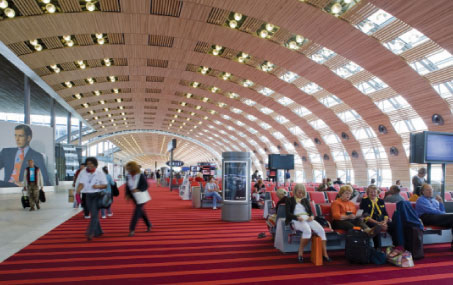 Paris-CDG’s Terminal 2E consists of a main building, with check-in and baggage reclaim areas, and two boarding lounges: the Galerie Parisienne, which was inaugurated in June 2007 and the concourse, which opened on 30 March 2008.

“Sustainable development is particularly close to my heart. Aéroports de Paris has already invested a great deal in this field. In 2007, we made seven new commitments with the Ministry of Ecology and Sustainable Development to produce cleaner energy, to consume more efficiently and to commute in a more responsible way,” said Graff.

For example, Paris-CDG has made a commitment to reduce average taxiing times by 10% by 2015. Aéroports de Paris also plans to reduce its own energy consumption by 20% per passenger by 2020 and 40% before 2040.

CDGVAL is a good example of Aéroports de Paris’ environmental success. The automatic transport system opened in April 2007 and has since carried more than 10 million passengers; it serves all terminals at Paris-CDG in less than eight minutes, as well as the TGV and RER stations, and the car parks. “The benefits to the environment are significant: by substantially replacing all shuttle busses, CDGVAL has allowed us to save 750 tonnes of diesel oil, 15 tonnes of nitrogen oxide and 2,000 tonnes of carbon dioxide,” said Graff. 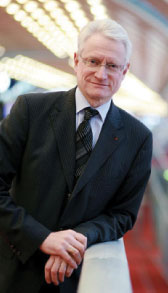 Graff: “Every day, the Aéroports de Paris and Air France teams work hand in hand. Substantial progress has already been made. We signed, for example, an agreement on the future Satellite 4 at Paris-CDG in March 2008. It is the first time that we associate an airline to a major construction project from the design stage on.”

Aéroports de Paris places great importance on the airport-airlines relationship. “It is in everyone’s interest that airports and airlines find efficient partnership modes and this is what we are doing here in Paris with all the airlines, and particularly their alliances,” said Graff. “Our relationships with airlines and alliances are good.”

However, there were legal challenges against the Economic Regulation Contract (CRE) signed with the government in 2006, which, in particular, regulates the level of investments and the level of airport charges between 2006 and 2010. The State Council decided in Aéroports de Paris’ favour. “I regret that these associations do not always understand that all the things undertaken by Aéroports de Paris – the privatisation, the IPO – serve their interests. The airlines need an airport capable of changing and investing. What is good for the airport is also good for the airlines,” said Graff.

With this parallel in mind, the relationship between Aéroports de Paris and Air France has evolved beyond day-to-day operational issues to long-term strategic issues. The two groups have agreed to a cooperative approach called ‘Réussir ensemble’, aimed at reinforcing the ties between the two companies and partnership working patterns. “Every day, the Aéroports de Paris and Air France teams work hand in hand,” said Graff. “Substantial progress has already been made. We signed, for example, an agreement on the future Satellite 4 at Paris-CDG in March 2008. It is the first time that we have associated an airline with a major construction project from the design stage on. This allows us to assess the client’s needs more precisely, to determine the necessary investment amounts and the delivery calendar.”

Low-cost carriers contribute strongly to traffic growth at the Paris airports. They reinforce the economic model, which is based on extremely strong origin-destination traffic and on what Graff describes as “the most powerful European hub”. In 2007, 13 low-cost carriers operated from Paris-Orly and 18 from Paris-CDG. They represented 9.2 million passengers for the Paris airports – about 8.5% of the total passenger traffic at Paris-CDG and 15.8% at Paris-Orly. Moreover, easyJet has been the second largest airline in Paris since 2005, with a yearly traffic volume of around 3.5 million passengers and more than 40 daily departures.

Nevertheless, Aéroports de Paris does not believe in differentiated airport infrastructure and services for low-cost carriers. “We are not considering having low-cost only facilities. Our terminals already offer services and rates that are adapted to all airlines. Besides, this would lead to real legal issues as shown by the State Council decision in the case of Marseille airport,” said Graff.

Aéroports de Paris has a commercial strategy based on ambitious expansion plan of its retail areas. “We will do better than what we had announced in June 2006 when we launched our IPO, with a total increase of 34% over five years. Regarding the shops in the international duty free area, we will do even better, with an increase of 70% compared to the initial objective of 44%,” said Graff.

2007 and 2008 are two essential years in terms of the success of the Aéroports de Paris retail programme, with retail space increasing by almost 15,000sqm compared with 2006. In 2008, Aéroports de Paris plans to open more than 5,500sqm of shops, bars and restaurants.

Commercial revenues in the first quarter of 2008 posted a 12.9% increase, up to €55.9 million. Airside shops in the restricted areas recorded 14.8% revenue growth, which was boosted by increased international passenger traffic. These good results were bolstered by the Aéroports de Paris programme aimed at extending retail areas with, in particular, an excellent performance by the Galerie Parisienne shops and brisk business in the retail areas of the recently renovated terminals. Bar and restaurant revenues climbed 7.3% quarter-on-quarter.

“Our strategy is based on a precise analysis of our clients’ needs in order to offer them a tailor-made shopping experience. At Paris-Orly, we will open a new 2,200sqm retail area in July 2008, comprising nine shops and a new catering concept to welcome the 3.3 million passengers departing on international flights. We are doubling the retail area in Terminal South to offer passengers a more spacious retail area with, for example, a giant 600sqm shop dedicated to gastronomy, spirits and tobacco,” said Graff.

The Terminal 2E boarding pier at Paris-CDG, which opened in March, is a showcase for the new range of Aéroports de Paris shops. The shopping gallery features 31 shops and seven bars and restaurants, spread over 4,600sqm with 18 prestigious new brands emblematic of luxury, fashion, beauty and French gastronomy. The concourse also hosts a 200-seat ‘Cuisines of the World’ food court and a new concept opened by renowned French chef Guy Martin. 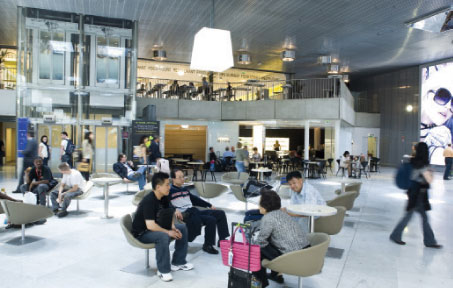 Terminal 2E was designed with three ‘living’ areas: located at the very ends of the concourse are two islands of lounge chairs; four relaxation areas have been set out in the concourse, two in each wing; and there are also traditional waiting areas with rows of comfortable chairs. 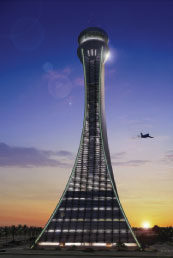 The 110m high control tower at Abu Dhabi International Airport, which was designed by ADPI.

ADPM and ADPI, Aéroports de Paris’ subsidiaries, which manage its international businesses, are also both performing very well. They offer an additional source of revenue and promising and attractive growth for the group. Aéroports de Paris Management (ADPM) was created in 1990 as a subsidiary of the Aéroports de Paris Group. It is dedicated to the management of airports and to the acquisition of shares in several airport companies. ADPM manages airports handling a total of 42 million passengers per year. Its revenues increased 32.8% to 110.6 million in 2007. Some of ADPM’s recent successes include:

ADPI, established in 2000, offers design, architecture and engineering services and can act as project manager. It has 80 projects pending around the world and in 2007 saw revenues rise an impressive 90.5% to €64 million. 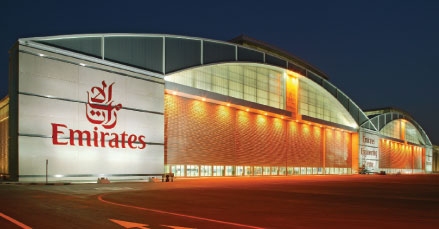 The Emirates aircraft maintenance base in Dubai. The largest in the world, it is located on a 55-hectare site. ADPI was the main consultant on the project.