ACI EUROPE has been actively involved in informing its members of all the requirements of the Regulation, as well as helping with their implementation, through the organisation of a series of workshops and conferences. ACI EUROPE Director General Olivier Jankovec has written to the CEO’s of all ACI EUROPE member airports, informing them of the PAL and CAL standardised tools which are crucial elements in the communication of PRMs details. Information has also been presented to ACI EUROPE member airports in two special workshops, a European Commission conference in January, the Facilitation Committee meetings, and other emails and events.

Prenotification requirements as stated in the Regulation stipulate that PRMs have to notify their need for assistance at least 48 hours in advance to their airline/tour operator/travel agent. They, in turn, must then transfer this data to airports at least 36 hours before flight departure.

Prenotification requirements as stated in the Regulation stipulate that PRMs have to notify their need for assistance at least 48 hours in advance to their airline/tour operator/travel agent. They, in turn, must then transfer this data to airports at least 36 hours before flight departure. In this context, ACI EUROPE and the Association of European Airlines (AEA) organised a joint working group to develop a simplified message type. The core group met twice and comprised five airport and airline representatives, the group of national travel agents’ and tour operators’ associations within the EU (ECTAA), an ACI EUROPE representative (Vanessa Holve), an AEA representative (Edith Anthony Thaver), two IATA representatives (Chris Miles and Arthur Kourajian from Unisys – IATA consultant) and two PRM service providers’ representatives (Intergom and IHD Services). 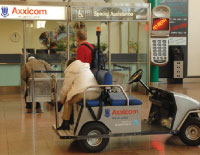 A PRM Notification Tool was approved at the IATA Reservation Committee on 10 October 2007 and has become an IATA Recommended Practice Document.

The Recommended Practice Document suggests introducing a Passenger Assistance List (PAL) and a Change Assistance List (CAL). The PAL is a list of PRMs concerning a particular flight and board point. The message is produced by an airline’s reservation system for the special assistance handling of passengers. A PAL is sent for each departure airport on the route of a flight if the flight departs from or arrives at an EU airport. A PAL list is always sent, even when there are no PRMs on board; in such cases, a NIL value is used. The PAL/CAL lists are sent via teletype and are addressed as specified by each EU airport.

The CAL is an updated list with any changes that have occurred in the reservations system since dispatch of a flight’s PAL, or a previous CAL.

The list contains the names of those passengers qualifying for reduced mobility handling, as well as those that may have had a change to their reduced mobility qualification. If there are no add, change delete conditions for PRM passengers, no CAL is sent.

According to ACI EUROPE’s most recent survey, the majority of EU airports are ready for the implementation date – indeed, many have had their systems tuned to the new regime of such time now. In the weeks ahead, the European Commission will be releasing a video campaign soon to inform travellers of the new regulation, with a focus on prenotification which is crucial for quality assistance.