Date: 01 May 2008 Category: Environment No Comments

East Midlands is part of the Manchester Airports Group, which also includes Manchester, Bournemouth and Humberside airports. While East Midlands will be carbon neutral by 2012, there are ambitious plans across the whole group to achieve carbon neutrality by 2015. “Environmental issues are a key corporate priority for the Group,” said Robinson. “We are achieving our carbon neutral target in a structured way. We are looking to reduce the amount of carbon offset we need to do by reducing demand for energy – we are placing significant emphasis on energy conservation.”

East Midlands is the first UK airport to propose the installation of wind turbines on site. North West Leicestershire District Council approved plans for the four 31.5m tall wind turbines in April. They are expected to generate 10% of the airport’s energy and are a significant step towards making ground operations carbon neutral by 2012. The four turbines are expected to produce up to 225kw each, which is enough to power 503 houses per year and result in an estimated saving of 850 tonnes of CO2 per year. Robinson explained that the location of each turbine has been carefully selected to ensure that they are well screened and have little impact on local residents. They will be located more than 800m from the nearest property, with a commitment that they will not be audible from any residential property.

The 31.5m tall wind turbines have three 13.5m blades. The total height to the top of the blade tip is up to 45m and the turbine stem is 3m wide. The airport has invested more than £3 million (€3.8m) in environmental initiatives over the last 10 years, ranging from emissions control to waste management and surface water management.

Robinson described the four turbines as a step closer to delivering on the promise made in the Master Plan. “In addition to the four wind turbines, we have increased the proportion of energy that comes from renewable sources and introduced a number of environmental measures such as our ‘green pier’ to reduce the impact on the environment. The turbines are another very substantial investment in environmental management by the airport,” he said. 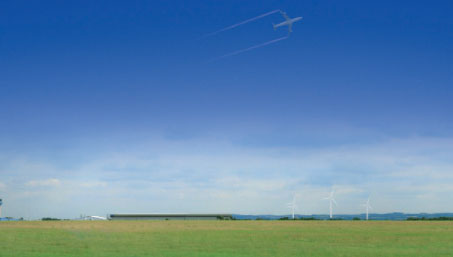 North West Leicestershire District Council approved East Midlands’ plans for four 31.5m wind turbines in April. They are expected to generate 10% of the airport’s energy and are a significant step towards making ground operations carbon neutral by 2012.

The airport approached North West Leicestershire District Council with its wind turbine proposal in September 2007. Careful consideration was given to all aspects of the proposals, with advice sought from world leading safety assessment company Qinetiq and the Civil Aviation Authority, in order to ensure the safety of the plans ahead of the planning process. Powered entirely by wind, the turbines will be installed by Lancaster based company Wind Direct. Naturally, they will be installed away from the runway and other functional areas to ensure operational safety.

Adrian Maddocks, development director, Wind Direct, said: “This project sets an impressive milestone for the airport and we are very pleased to be working with them. The four wind turbines demonstrate the airport’s commitment to green energy and help reduce carbon dioxide emissions for the lifetime of the project.” 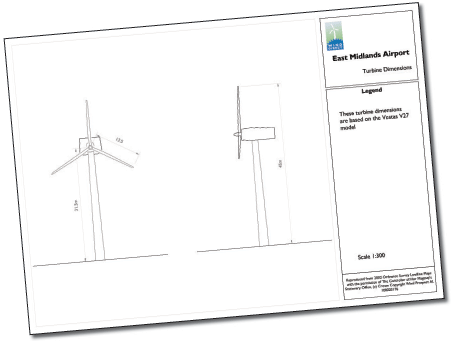 The four wind turbines are expected to produce up to 225kw each, which is enough to power 503 houses per year and result in an estimated carbon saving of 850 tonnes per year.

In 2007, East Midlands’ commitment to ‘green’ energy was highlighted by the extension of the departure lounge with a new ‘green pier’. The £6 million (€7.6m) facility links with the existing departure lounge via a high level walkway and was necessitated by increasing passenger numbers. A record throughput of 5.4 million passengers was achieved in 2007. Impressive growth has continued in the first quarter of 2008; the airport handled 1.2 million passengers in the first three months of the year, an increase of 15.2% year-on-year – it is the airport’s eighth successive quarter of growth. 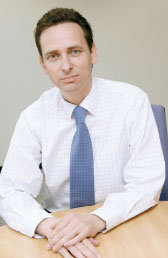 Robinson: “We are achieving our carbon neutral target in a structured way. We are looking to reduce the amount of carbon offset we need to do by reducing demand for energy – we are placing significant emphasis on energy conservation.”

“The pier is the first building we have designed from a blank sheet of paper with the intention of being a low energy impact building,” said Robinson. The energy efficient pier obtains heat from 27 100m deep boreholes, which Robinson explained is the most radical aspect – these are five times more efficient than other heating sources. The impact on the environment is further reduced through measures such as the toilets using rain water for flushing and the hand dryers using 83% lower electricity. There are also wind catchers on the roof, while all lighting is natural or low energy. Infrared movement sensors mean that the low energy lighting only comes on when someone is in the building. “In total, these measures have saved around 80% of the energy that would have been used in a traditional building. This has set the tone for how we will move forward with future projects,” said Robinson.

East Midlands’ comprehensive environmental strategy was recognised at the World Travel Awards last October, where it was voted ‘World’s Leading Eco-Friendly Airport’. The airport was recognised for its myriad environmental initiatives, including its commitment to becoming carbon neutral, international environmental accreditation to ISO14001, new ‘green pier’, and wind turbine plans.

Robinson said: “Winning the award is wonderful recognition of our environment work that we have completed since publishing our Master Plan in 2006.”

The progress doesn’t stop there. Manchester Airports Group is also closely evaluating the benefits of biomass technology. A small biomass facility has been put in place at Manchester Airport and the Group is looking at doing so at East Midlands and Bournemouth airports. This involves wood fired heating, which is particularly appropriate at East Midlands, which close to a national forest that can provide a sustainable source of wood chip and wood pellet.