Verona’s security and check-in facilities are being enhanced; the boarding areas are being doubled and the number of check-in desks is being increased from 20 to 50.

The original design of Verona Airport is being reorganised to enable a new departure terminal, which will result in 70% more retail space, as well as new boarding areas and 20 additional check-in desks, taking the total to 50.

10 self-service kiosks will also be provided, as well as four new passenger security points and three new boarding gates. The new baggage handling system will have the capacity to process 2,400 items per hour.

Boccardo said: “There is only a small amount of space for commercial operations and expansion, but we have rising passenger numbers so we needed to do this development so that it will be much more comfortable for passengers.” 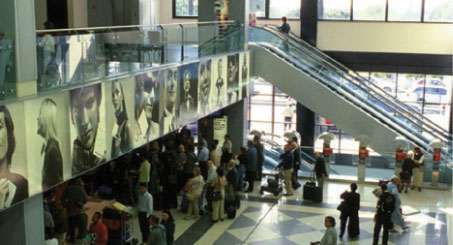 The design of Verona Airport is being reorganised to complete a new departure terminal, enabling 70% more retail space.

Verona’s throughput of 3.5 million passengers in 2007 was a 17% rise year-on-year, which Boccardo described as “exceptional considering we are not referred to as a low-cost airport”.

Double-digit growth of 14% was also achieved in 2006; 2008 is expected to be a period of consolidation, with more modest growth of 6% resulting in a total throughput of 3.7 million. “To increase traffic, we are going to pay a lot of attention to the low-cost developments. We have created a marketing company, Cuore D’Italia, together with main entities and cities in the catchment area, to promote Verona and the other four provinces – Brescia, Mantova, Trento and Vicenza – in Europe and further abroad. There are tourist opportunities, including Lake Garda, that are been marketed by ‘Cuore D’Italia’. I think that our System will continue to serve more and more different types of people and I am very optimistic about it,” said Boccardo.

With increased traffic and considerably larger commercial areas, Boccardo believes Verona’s retail will benefit. “Non-aeronautical activity is vital, otherwise the airport could not survive. More space in the terminal will mean that we can get passengers through the process quicker. This means that they will be able to move more comfortably and have more time in the commercial areas,” he said.

In line with the new European Commission legislation on persons of reduced mobility (PRMs), which enters into force in July, Verona’s terminal has been designed to fit the needs of PRMs, with particular attention paid to visually impaired passengers. A special route consists of tactile markings made of rubber elements or tiles on the flooring. The route begins in the disabled car park, through the terminal and to the boarding gates. Boccardo said: “This is quite new in Europe and means that someone who is blind can walk independently through the terminal.”

Focus on North and East Europe

“As a destination, Russia is very important. There is a strong income of traffic from Russia, particularly for the winter skiing season and Lake Garda. Verona was also one of the very first airports in Italy to open up flights to Romania, Bulgaria and Russia. It has been a tradition of the airport to fly to new destinations, so we want to continue doing so,” said Boccardo. 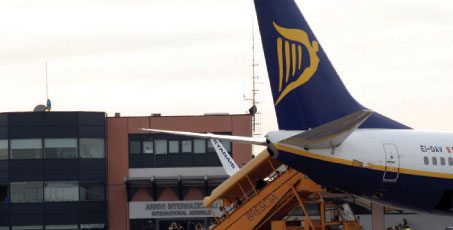 There are discussions underway to promote integration between Verona, Brescia and Bergamo airports to maximise the economic potential in northern Italy. 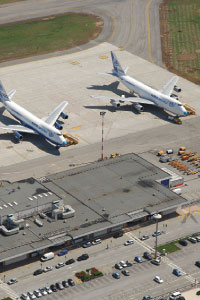 Boccardo: “There is a lot of space at Brescia, which means that it is one of the very few airports in Europe that can be developed with a second runway.”

Since starting commercial operations in 1999, Brescia has reached a throughput of 200,000 passengers per year and developed considerable cargo operations, handling 35,000 tonnes last year. Significantly smaller than Verona, the airport is focused on increasing its LCC traffic and hopes to serve as a reliever airport for Verona by handling charter services during peak periods.

As a small airport located between two established airports – Verona and Bergamo – Brescia is struggling to compete for passenger traffic. “Like many airports, it is not easy to increase passenger growth in the first place, but when a small airport is located next to two other airports that have bigger traffic, developments become very problematic,” said Boccardo.

At present, Ryanair operates services to London Stansted and Air Bee began flights to Naples and Rome in early February; these are the type of routes that Boccardo wants to increase in the future. Brescia is successfully developing its cargo services with six weekly flights to the Far East beginning this year, plus cargo routes to China and Hong Kong.

Brescia has considerable potential to expand its operations. “There is a lot of space, which means that Brescia is one of the very few airports in Europe that can be developed with a second runway,” said Boccardo. He hopes that Brescia’s accessibility will encourage passenger growth. “There will be a high-speed train to the area by 2014 and the airport is located near the conjunction of two major motorways, so it is very easy to get to,” he said.

Current expansion plans include a 30,000sqm extension to the apron, which is currently 55,000sqm, and increasing the freight warehouse from 4,000sqm to 8,500sqm by 2009. Gaining permission for the developments has been frustrating. Boccardo said: “There are economic, security and bureaucratic threats, which make development hard. Under the Italian system, you can spend three quarters of your time simply preparing papers. We are currently in discussion with the Italian government to promote a new airport development process.”

There is also discussion regarding integration opportunities between Brescia, Verona and Bergamo, to maximise the economic benefits in northern Italy, which cannot be detailed at present.

Brescia also operates as a mail base for Italy. The mailing service involves 12 national flights into Brescia between midnight and 01:50, where the mail exchange takes place on Brescia’s apron. It is a process that lasts approximately half an hour before the aircraft depart to specific destinations. “We have been giving a good performance and are always reducing our times so that the planes often depart in advance by 10-15 minutes each night. We are still in the testing stage, but it’s going very well and has been a great opportunity for Brescia airport,” said Boccardo.