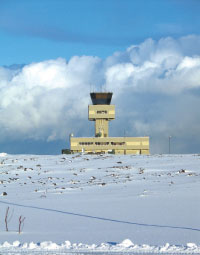 Staff training and translations at Keflavik have been completed. The next stage involves tailoring the system to its surrounding environment, including weather stations.

On 1 January, Opscom and Keflavik International Airport began a project to improve operations and safety at regional airports; the project is co-funded by the Nordic Atlantic Co-operation (NORA). Following staff training and Icelandic translations in January, the system is now being tailor made and integrated with other local requirements at Keflavik, such as weather stations, relaying temperature and other met-data, plus specific functional requirements. Mosand said: “I believe that Keflavik International found our solution interesting and saw that the project was a low financial risk. I hope that Opscom can make a contribution to the development of Keflavik as an efficient, safe and important hub for the cross-Atlantic traffic.”

E. Omar Sveinsson, director of airport operations, Keflavik International Airport, added: “The Opscom system will be a huge help on all levels of operations as we are building up the systems from scratch. Our expectations are very high.”

Communication via SMS and email

Regarding efficiency at European airports, Mosand explained that there is quite a difference in operational effectiveness, resulting in some outdated information.

Opscom is currently working with a Norwegian airfield owner concerning obstruction lights. Opscom mounts sensors in the obstruction lights, which relay the signals when they fail into the Opscom system for event handling. The relevant personnel are then instantly notified via SMS and/or email. “This radically improves the process of manually inspecting the obstruction lights and is an example of one of the innovations we are exploring in order to make operations more efficient,” said Mosand.

Opscom is also working on projects in the UK, Sweden and the Faroe Islands through 2008 and is in discussion with Kangerlussuaq Airport – Greenland’s biggest airport – regarding the same system being implemented at Keflavik. A meeting has been organised, in April, involving all the airports in Greenland – 12 in total – to discuss the system. Mosand said: “We’ll see what we can offer in terms of innovative operational systems; we’ll simply take it from there.”

“There is quite a difference in operational effectiveness. Some airports still use stand-alone spreadsheet based tools or vertical functional systems from a number of different vendors and rely on the manual transfer of data from one system to another. These can be quite inaccurate as you have to manually prepare a report from various sources and distribute this prior to a meeting, so you inherently end up discussing outdated information,” said Mosand.

To avoid this, Opscom aims to provide management that is current and “the heartbeat of operations,” said Mosand, by continuously updating and tailoring functionalities and modules, including the development of a complete ‘quality system’ that integrates the operational system. This enables a collaboration platform between operational personnel and the quality department. A module specifically tailored for the fire and rescue department, including handling of certificates, training and shift planning is among the innovative developments that Opscom is undergoing to maintain currency in airport operations.

A motion for a European Parliament resolution states that by 2025 more than 60 European airports will be unable to handle the typical peak demand without generating delays, causing a number of challenges for airport stakeholders, local communities, the environment and airlines. “There is room for improvement. ACI EUROPE’s SMAG (Small and Medium Size Airports Action Group) initiative is focused on regional airports’ potential for taking their share of the projected growth in traffic. For example, to develop point-to-point international traffic, not just feeding the national hubs,” said Mosand, who thinks that there will be a demand for management systems, like Opscom, at regional airports to enable them to cope with the increased traffic.

“Increased focus and traffic at regional airports would imply that better systems should be implemented – that includes operational systems. We are aiming to have at least four new airport customers by the end of this year,” he said.