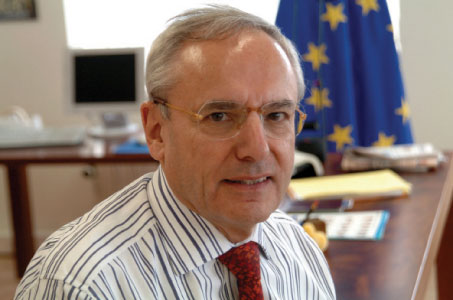 Jacques Barrot, Vice President of the European Commission with responsibility for transport: “If we do not take action, the capacity of the air traffic management system and of our airports could be inadequate to the point of crisis by the end of this decade.”

This was the third such Aviation Conference, following those held in Edinburgh in 2005 and Brussels in 2006. ACI EUROPE Director General Olivier Jankovec represented airports, while other participants included airspace users, service providers, and representatives from the European Commission, EUROCONTROL and EASA.

Jacques Barrot, Vice President of the European Commission with responsibility for transport, described it as an important day in the development of the Single European Sky. It has long been known that there is a need to develop the European ATC system to accommodate growth in aviation; it is forecast that aircraft movements could double by 2020. “If we do not take action, the capacity of the air traffic management system and of our airports could be inadequate to the point of crisis by the end of this decade,” said Barrot.

He also acknowledged the pressure to deliver cost effectiveness and efficiency without compromising safety or threatening the skill base of those working in the air transport industry. “In the past three years these reasons have been joined by an overriding need to improve the efficiency of aviation for environmental reasons. Better routes, fewer delays and a more intelligent flight have become essential in order to reduce the impact of aviation on the environment and in particular to reduce the carbon dioxide emissions of every aircraft and every journey,” said Barrot.

In November 2006, Barrot established a High Level Group (HLG), representing different strands of the aviation community, to report on the future European aviation regulatory framework, with a focus on ATM issues and implementation of the Single European Sky (SES) initiative. The Group delivered its report in July 2007, with a series of recommendations.

“First and foremost – we need to deliver the Single Sky. The High Level Group stressed the need for a proactive approach and across the board cooperation to accelerate the progress of the single sky, to ensure SESAR delivers the technological progress we need and to make progress with Functional Airspace Blocks,” said Barrot. 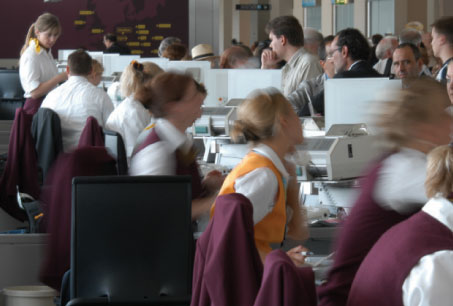 By 2025, more than 60 airports will be congested and the top 20 airports will be saturated. The ‘Challenges to Growth’ report concludes that the only way to accommodate demand without interfering with demand patterns is the creation of new infrastructure.

Jankovec, a member of the 10-strong HLG, expressed ACI EUROPE’s support for the Group’s report and the Barrot method of involving all actors and stakeholders, thorough consultation and open and intense debate. In terms of the SES, Jankovec contended that a “community approach is the only way to secure step change” and the driving objective of improved performance. It was a key area of common ground highlighted by Matthias Ruete, Director General, DG TREN, in his conclusions to the conference. “The Community method has been confirmed as the most effective tool to use. It can not only provide better regulation, but also assures close co-operation between all relevant stakeholders and of course building on the unique expertise of Eurocontrol in ATM matters,” said Ruete.

Matthias Ruete, Director General, DG TREN: “The Single European Sky is open to non-EU countries who conclude aviation agreements with the EU. This should be done by 2010.”

There is a sense of urgency as Europe is paying the cost of fragmentation – Ruete put this cost at €3 billion per year due to inefficiencies and the environmental costs of the current system. “Aviation in Europe faces growing competition from other parts of the world for the market in Europe and the global aviation market. This emphasises the importance of finding cost-effective solutions,” he said.

It was concluded that the European Commission should be encouraged to act quickly to draw up the SES II package, including performance targets at European level, the creation of a European network manager, accelerating Functional Airspace Blocks (FABs) and establishing a performance review mechanism. The European Commission will propose the second SES package in June 2008. “Member States should politically commit themselves to the creation of FABs in 2010, with implementation by 2012,” said Ruete.

It was also considered that a pan-European dimension – looking beyond the EU-27 and embracing a wider European Common Aviation Area approach – could be of greater significance to the goal of global interoperability. “The Single European Sky is open to non-EU countries who conclude aviation agreements with the EU. This should be done by 2010,” said Ruete. 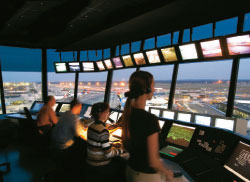 It has long been known that there is a need to develop the European ATC system to accommodate growth in aviation; it is forecast that aircraft movements could double by 2020.

Jankovec addressed the looming airport capacity crunch; by 2025, more than 60 airports will be congested and the top 20 airports will be saturated. These projections are based on an optimistic scenario of maximum achievable capacity involving no closure of airports, no capacity limitations, implementation of all existing expansion plans and systematic implementation of best practices. This means that the only real solution to effectively address the airport capacity crunch is the construction of new infrastructure. In this regard, Jankovec echoed the 2004 EUROCONTROL ‘Challenges to Growth’ report, which concludes that the only way to accommodate demand is the creation of new infrastructure. “Ultimately, this is not an airport capacity crunch, but an aviation system capacity crunch,” said Jankovec.

The airport industry has been disappointed by the inadequate EU response, which considers capacity in the sky – ATM – the top priority. Capacity on the ground has not been properly addressed; the European Commission’s 2007 Communication on an action plan for airport capacity, efficiency and safety in Europe does not reflect the conclusions of the ‘Challenges to Growth’ report. The Communication is focused on optimising existing capacity, with no recognition of the need to build new infrastructure. At risk, explained Jankovec, is the success of the SES, the competitiveness of European aviation and the Lisbon Agenda.

Ruete said: “The capacity crunch must also be addressed through technological innovation from the SESAR programme, closely coupled with measures to improve airport capacity. Airport capacity will require in the future the implementation of essential measures, like the creation of an Observatory of capacity at EU level to reconcile growth and the environment. The implementation of SESAR is a necessity, as new technologies must be implemented to ensure that the European aviation system will be safe, competitive and environmentally responsible.”

In this context, the need to raise the political profile of airport capacity was raised by Jankovec – airport capacity should be the fourth pillar of the SES II packagefollow-up/expansion of the existing European Commission Communication.

The EU must reconcile aviation growth and environmental goals. Jankovec summarised the urgency of the issue “there is no clear policy direction yet, high regulatory risk for the industry and the need for a coherent and integrated EU strategy”. It was agreed that environmental aspects need to be incorporated into the whole aviation system. Ruete said: “Europe has to play a leading role in balancing the economic, environmental, safety and social impacts, without compromising competitiveness and sustainable development of this system.”

A comprehensive approach was advocated, entailing technologies such as Clean Sky and SESAR, operational measures, Single European Sky and market-based measures such as the Emissions Trading Scheme.

“I believe we have a unique chance to focus on the essential changes to the European aviation system so that we can put forward the necessary legislative proposals between now and the end of this Commission term,” concluded Ruete.