Date: 22 Oct 2014 Category: Interviews Comments Off on “In all circumstances, we’re only going to grow when it’s profitable”

“In all circumstances, we’re only going to grow when it’s profitable”

Paul Simmons, Chief Commercial Officer, Flybe (right): “London City Airport helped us in talks with the slot coordinator, as well as giving us some sensible guidance on our planned route network.”

The former Director UK Market at easyJet joined Flybe’s new management team exactly a year ago. In that time Flybe has made some dramatic changes, most notably the decision to exit London Gatwick, sell all its slots there to easyJet, and refocus its key London operations on London City Airport (LCY) where, of course, its Q400 aircraft types are absolutely ideal.

“The decision to move in to London City was very quick and a major part of our re-focus on regional connectivity. It was also a two-way decision with LCY helping us in talks with the slot coordinator, ACL, with slot acquisition, as well as giving us some sensible guidance on our planned route network. Overall LCY made us feel very welcome.”

Significantly, despite Flybe’s raft of new routes at LCY, aircraft will not stay overnight at LCY and the large new operation does not actually constitute a base. “The large programme of LCY route launches are all about first wave connectivity in which our aircraft will be among the first morning arrivals in the UK capital, combined with interlining and code share,” says Simmons.

Flybe first became a hybrid low-fares/regional airline after ‘morphing’ out of British European just over a decade ago (it is also a founding member of the European Low Fare Airline Association). Simmons agrees that the move will now mean yields will rise: “Passengers will pay some premium to fly into LCY – although costs are also higher – however, our product will remain value-driven and we’ll continue to work on getting higher load factors which have already risen by some 10% in the past year.”

Despite the fact that LCY is now Flybe’s new London home in the mega city, the switch of London airports does not mean Flybe can merely pick up where it left off – the catchment areas are radically different. Both airports amply serve central London – LCY and LGW both have excellent rapid transport links – LCY by the wholly integrated Underground and Docklands Light Railway. But, outside of the centre of London, the resemblance between the catchments ends and the customer goodwill base that Flybe enjoyed in South London, stretching to the south coast, will not automatically transfer to the new operation in the east of the capital.

However, Flybe now has the prospect of serving a brand new seam of wealthy customers in the Docklands financial district. “Yes it is a different proposition. But the transition is showing all the signs of success – awareness is very good, Flybe has the pull and trust of a brand which is not unknown to our new markets, and it has been warmly welcomed by the business community in Canary Wharf which has shown a great awareness of the amenity provided by our arrival and our new routes. This is more than we would expect normally when we arrive at other airports – as a result we have a lot of solid corporate contracting.”

Meanwhile, Simmons says that the catchment does not overlap with London Southend – further along the Thames Estuary to the east of London, where new Flybe services also began this year. “This is simply explained – for us London Southend is predominantly a leisure market, whereas LCY is centred on business – there is a very clear differentiation.” Simmons also explains away other apparent anomalies – that Dundee continues to be served by Flybe from London Stansted, while Newquay services remain at Gatwick. Apparently both routes are Public Service Obligation-involved services which means that assistance most likely relates directly to those airport pairs.

The spread of Flybe does not stop there either. Under a “Twin Engine Strategy” the airline puts significant store by “White Label” services which see it operating entirely under Brussels Airlines’ auspices, while its Flybe Nordic unit similarly operates for Finnair. These are not codeshare or partner relations which are common in the regional airline community, but wholly subsumed relationships. “We are talking with a number of other airlines,” says Simmons, who expects this aspect of the Flybe business will indeed grow significantly.

Despite the enthusiastic reception shown for the arrival of Flybe at London City Airport, Simmons says further expansion will be sober and cautious. “The number of future new routes will be based on what we think is best, after all new routes are not the only way to grow capacity – we can add new frequencies to existing routes too. The new management team has a rigorous route assessment model, but in all circumstances, we’re only going to grow when it’s profitable.” 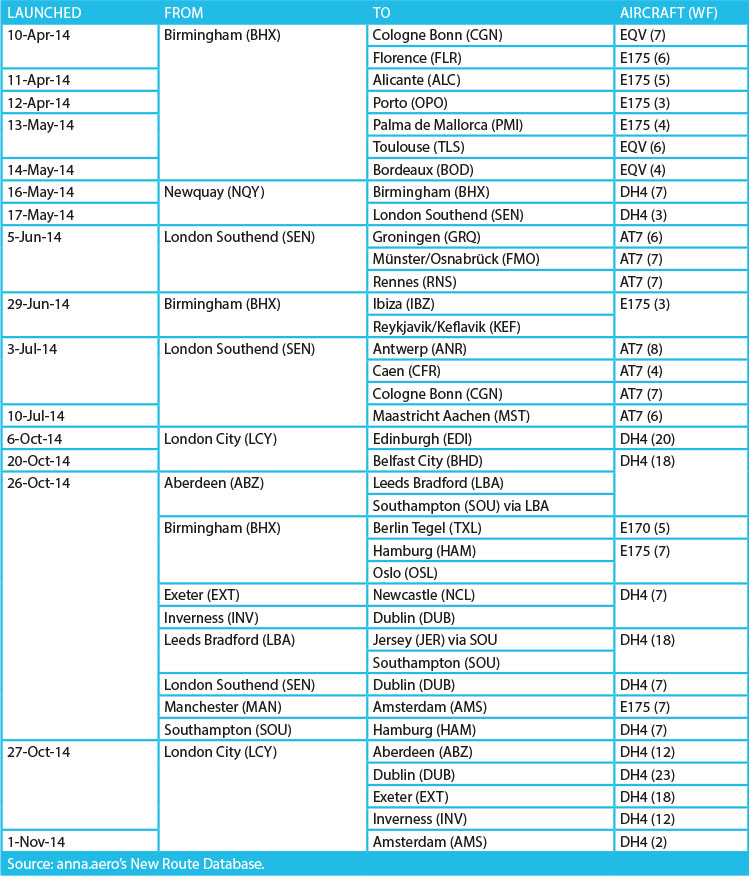